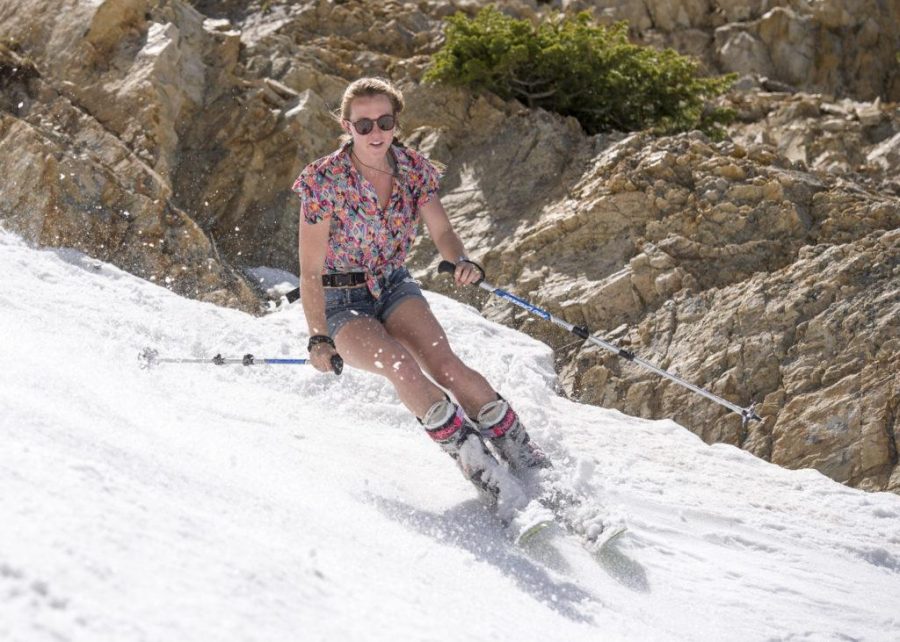 Skiing and pond skimming with Blake, and Kristen at Snowbird on Sunday, June 4, 2017 (Photo by Kiffer Creveling)

Winter here in Utah is a very exciting time. The days are shorter, the nights are longer, and there are plenty of ways to keep yourself occupied. Utah is known for its “Greatest Snow on Earth” for one thing, and all the locals will testify to that greatness. The Wasatch Mountain Range is a world class destination for snow skiing, drawing hundreds of thousands of visitors to the area each year. With all that importance placed on our snow, what happens when snow doesn’t come?

Snow is an essential element in the ecosystem. It is a storage system of fresh water that can be utilized during Utah’s typically dry summer months, it regulates the global temperature with its ability to reflect 80 to 90 percent of incoming sunlight, and it also provides insulation that prevents moisture and other gases from escaping into the atmosphere. In short, snow serves many vital purposes that we often take for granted.

Here in Utah, we mostly look at snow as a recreational good, but its importance in other ways cannot be overstated. With the current lack of snow this season, Salt Lake City will most likely be experiencing a drought of varying severity.

Have we always been this concerned about the lack of snow in years past within the Beehive state? The simple answer is yes. In years past, ski resorts have delayed their opening days significantly due to the lack of snowfall, in fact. There are many patterns in history that cause a large fluctuation in weather, such as El Niño and La Niña years, but it seems that there is a general trend: the Earth, on average, is getting warmer each year.

Back in 1976, Colorado ski resorts almost didn’t open. In a place like Salt Lake, this is almost unthinkable. Today’s technology has come a long way since the ‘70s, and artificial snowmaking is now an important part to a successful ski season, but there is no way to control the temperature. This day and age, the air temperature must be at or below freezing for snow to be made.

If you look at the snowfall over the past 60 years in Utah, the average is around 470 inches of snow. All the records of large snowfall were set back in the ‘90s or earlier, and the only records set between 2000 and now recognize how little snow we have received.

This may just be the cycle of weather we are experiencing in the new millennium, but I sure hope that end of the cycle is near. It’s scary to think that one day it could no longer snow in Utah. For now, make the most of what snow we have received so far by getting out and going skiing as much as possible. When you ski, also be mindful of the potential snow has for more than just a ski slope and do your best to cut down on carbon emissions to help preserve it in the future. Ski resorts are already beginning to close throughout the world for good. Let’s make sure this doesn’t happen within the Wasatch Mountains.