A Brief Introduction to Canyoneering

In 2003, Aaron Ralston amputated his own arm after being trapped in a slot canyon for five days. It seems that more people have seen this incident as an invitation to try a new activity than as a warning of the possible dangers of the backcountry. Some of the more famous technical slot canyons in the region now show up on Google Maps, including Bluejohn, the site of the infamous self-amputation.

Although canyoneering (or canyoning, gorging, cascading, and even kloofing) has become more popular, the activity remains somewhat obscure. People who have canyoneered once or twice may not realize how technical and thrilling the sport can be.

“Canyoneering is the graceless act of descending a canyon,” says Keith Howells, the person who took me through my first few canyons. Canyons come in all shapes, sizes, rock types and flavors. Just as Minnesota is known for its abundance of lakes, Southern Utah is famous for its slot canyons.

Canyoneering can be as simple as hiking and rappelling. For people who have never been on a rope before, it may be the thrill of a lifetime. A climber on the same trip might be bored and confused, unsure what all the hype is about.

Should our hypothetical climber take the “been there, done that” attitude, they may miss out on the more thrilling sides of canyoneering. Rappelling through a frigid waterfall while the current is knocking your feet out from under you is a humbling experience.

Keeper potholes — features often characterized by an overhung drop, a more level area often full of water and sometimes dead animals, followed by a frequent overhung rise — require some strategy to negotiate. Sometimes bags of sand are thrown over as a counterweight. Sometimes the sturdier members of the team will lift, ladder, or even toss lighter people out and over so they can serve as a counterweight.

“Canyoneering is a touchy-feely sport.” This mantra should be familiar to any student who has canyoneered with the department of Parks, Recreation, and Tourism. Instructors and students stand in a circle, fist-bumping the people next to them and repeat the mantra. The group is there to make sure you make it through, and you’re there to take care of the group.

Rappel anchors in canyons are often described as “marginal,” a softer way of saying “sketch AF.” Strategically placed piles of stones, bags of sand, carefully buried rocks or sticks and other people should all be part of the Southwestern canyoneer’s quiver. I enjoy being one of the larger members of the group because when I test marginal anchors, I have the bodyweight of my friends serving as backup. If you want to build trust in a team, don’t use trust falls. Rappel off each other. 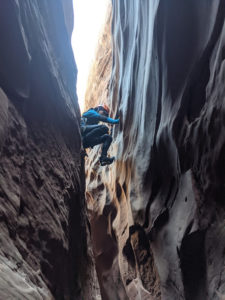 For me, canyoneering is special because of the journey. Canyons are a lot like river trips. Some are like a scenic flatwater trip: pleasant, relaxing, but not particularly thrilling. Others are more like sections of the Arkansas: challenging and technical, but not very dangerous. Still, others are like what you see Red Bull athletes run: big, scary, challenging and with nearly zero margin of error.

Pull down rigging is used on pretty much every pitch in a technical canyon. What this means is after everyone has rappelled, you pull the rope down, generally leaving some webbing and a screw link behind. Some canyons have escape routes, but usually, after the rope has been pulled on the first rappel, you and your group are committed to finishing the canyon.

I love this moment after the rope is pulled. It’s like flying an airplane — where taking off is optional, but landing is mandatory. You’re committed. Whatever planning or practice you wish you’d done, or extra gear you might have brought, it’s too late now. It’s time to enjoy what you’ve worked so hard for.

The level of commitment turns what may seem like minor details into critical ones. Sometimes turning around isn’t possible, and you face miles of potholes, rappels, down-climbs and pools of ice-cold water. If you misjudged the amount or the temperature of the water and didn’t bring enough neoprene or snacks, you’re going to have a hell of a story to tell. If you survive.

I love canyoneering. It’s taken me to some of the most beautiful places I’ve ever seen and brought me closer to friends who feel more like family. I hesitate to call it a sport, but between swimming through water, rappelling off bags of sand, wedging yourself between two walls far above the ground, or pothole escapes, there’s something for everyone.

If you decide to try it, you might be disappointed by the lack of adrenaline. But, if you go into it expecting to see some of the most beautiful and remote places on the planet, you’ll be pretty happy. And, if you decide to push things, there’s plenty of adrenaline to be found. 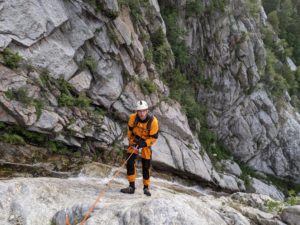