A Call for Consumer Education in “The Land of Many Uses” – And Users. 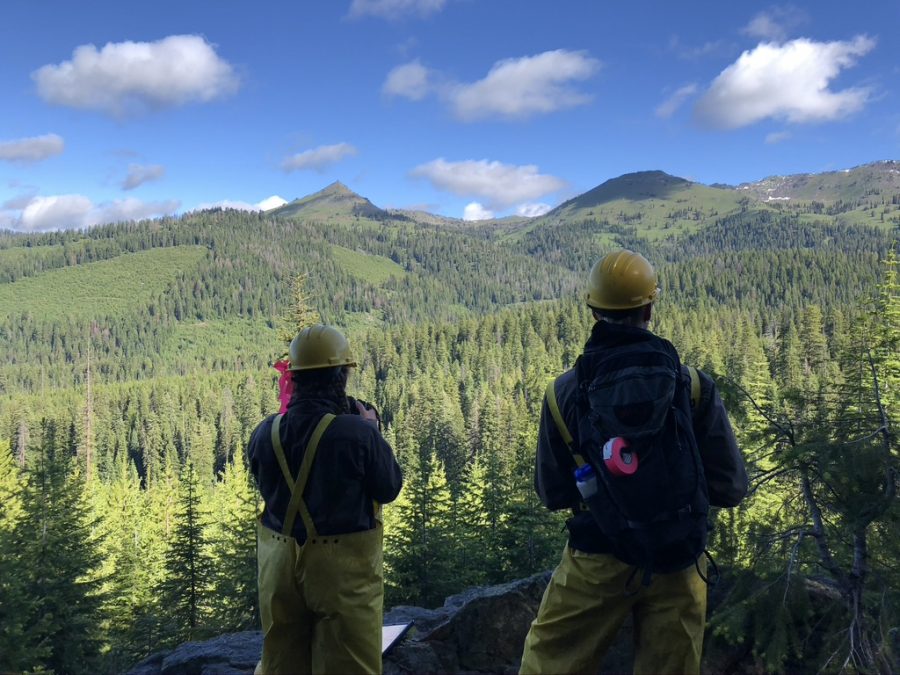 “Department of the Interior?”

On the first day of job with the Idaho Conservation Corps, guesses to the question “Who has jurisdiction over National Forests?” went on for entirely too long. As not only somebody who would be working with the Forest Service, but also an environmental studies major, I was gripped by imposter syndrome for not knowing that the Forest Service, the main management of our National Forests, is a branch of the U.S Department of Agriculture. I found two aspects of this striking and a bit disheartening. First, that our forests are an agricultural product. Second, as somebody who spends a heck of a lot of time in the woods, I didn’t know who was in charge of its preservation and management. Last summer I learned just how ignorant many of us are to forest management practices and the concerning impacts of this lack of communication between the government and recreationists in our National Forests.

Over a 10 week period last summer, I worked on a silviculture crew in the Payette National Forest. Silviculture “is the practice of controlling the growth, composition/structure, and quality of forests to meet values and needs, specifically timber production.”(Wikipedia). As a part of a small 3-5 person crew I was tasked with mapping stands of trees to be thinned and eventually prescribed burned as part of a plan to restore the habitat of the threatened Northern Idaho Ground Squirrel and improve overall forest health. The crews’ primary role was designing the plots of land that would need to be thinned based on recommendations drawn from relatively old satellite imagery. The plots of interest were mostly areas that had been completely clear cut within the last 30 years and replanted. Most of them were dense and lacked diversity. While sometimes tedious, it was important to re-map and mark these areas on foot to account for differences between the real world and the slightly outdated satellite imagery. To an outside eye,  however, we spent all day littering the forest with neon pink flagging and paper tags.

Many current projects in the forests of the West are designed to correct the mistakes of the forest management techniques of the eighties and nineties, when clear-cutting for commercial timber sales was a common practice. Without regulation, our nation suffered the loss of hundreds of acres of old growth forest and decimation of ecosystems. The work I was doing was a small step in an ever-evolving plan to develop forests with timber that could be harvested sustainably over multiple decades. Keeping the forests in both ecological and economic balance is a fickle process, dealing with the inconsistencies of different administrations and agency appointments. These decade-long initiatives involve several government agencies and labor contracts with conservation corps, fire crews, or timber companies, but often leave out a key element: the public.

In Idaho I was frequently interrogated by locals about why we were tying plastic neon flagging all around their forest. Understanding that bright pink flagging is more than a bit of an eyesore, I would weigh my options before responding because both versions of the truth usually resulted in a negative response. Forest thinning has an ugly reputation, but to elaborate and explain that it was for the habitat restoration of an endangered species risked an equally dismal  response; “The Northern Idaho Ground Squirrel? My kids and I use those for target practice!” The public in rural areas are often uneducated on the operations of government agencies around their homes. Without education on the role of various forest management techniques, people are often misinformed about the purposes of prescribed burns and forest thinning, and the intermediate stages of these processes can appear to be more harmful than helpful to an untrained eye. The usefulness of these practices as mechanisms for habitat restoration seemed to be the last thing people had in mind. They don’t like hearing the sound of chainsaws and smelling smoke in their forests, and for good reason. I had a bias against forest thinning starting my job and didn’t fully understand how necessary it is to improve stand health, soil quality, and biodiversity.

The motto of the Forest Service is “Caring for Land and Serving People”, but without engaging with the forest users and stakeholders, this mission cannot be satisfied. The best way to hear meaningful public response is to engage with the public and other stakeholders, beyond timber companies and beyond conservationists, to understand what they want to see in their forests. Education and dialogue on what practices are occurring and even more importantly, why they are occurring, would help to minimize public disturbance and frustration with the Forest Service, especially in rural communities. This engagement could come in the form of more accessible online information on forestry projects, social media, or public events with Forest Service personnel like rangers and contracted scientists.

Lack of forest management in the past has drastically changed our forests and laissez faire management is no longer an option. In different parts of the Payette National Forest, restoration projects are underway that could take decades to prove effective, ground squirrel habitat restoration included. In order for these projects to have public support, more time, effort and funds need be directed toward education. It is truly a waste of funding to start work without informing citizens who might unintentionally be acting in opposition to the Forest Service’s goals. As public lands users, we can do our part in preserving the forests we all care about by researching what kinds of projects might be going on in our local forests and supporting the Forest Service in their work.

National Forest is often advertised as “Land of Many Uses.” From hikers to bikers to OHV users to campers to loggers, it’s indisputable that these are also lands of many users. Without consumer education, the quality of the U.S.D.A’s “product” remains at risk, as does the longevity of one of our nation’s greatest treasures.