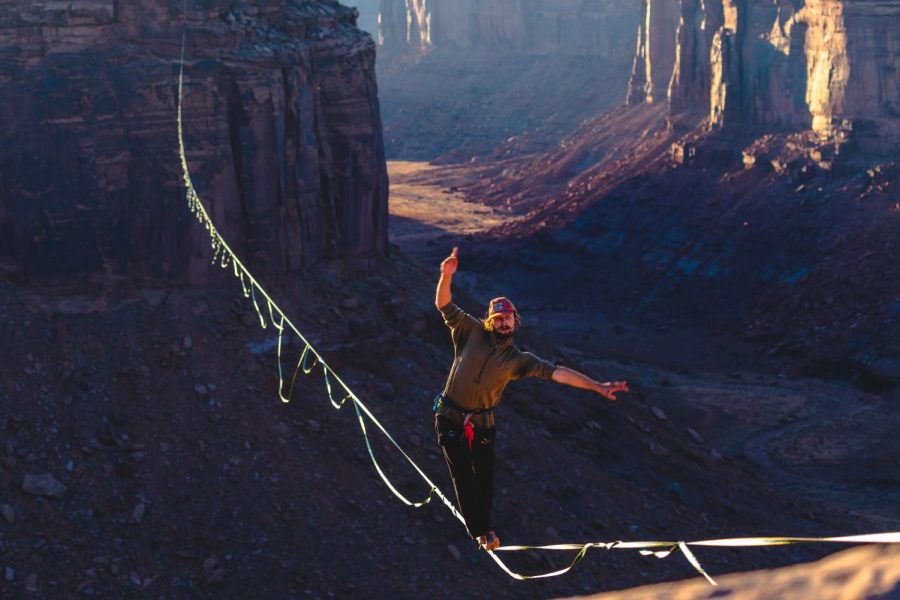 Over a bitterly cold November week in Moab, Utah, a group of highly motivated athletes set out to establish an ambitious new highline that would catalyze a U.S. record for the longest slackline walk in the country. On Nov. 11, they began this journey by spanning a 1-kilometer-long and 200-meter-high gap with one-inch-wide segments of webbing. Their mission was a success, with four individuals managing to walk the entire distance without a single fall. They broke the previous U.S. record of 880 meters in length, claiming a new record of 1,010 meters.

Those who successfully walked from anchor to anchor without falling were Kieran Blood, Kaio Apolinario, Caleb Beavers and Kevin Bankson. All others mentioned successfully walked the distance, but with a number of falls. A few individuals fell just once or twice and did so not far from the end of their walk. In highlining, when someone has yet to fall and is near the end of the line, the space they are walking in is aptly named “the heart-break zone.” Since the beginning and end of the line are at an incline due to the lack of tension, balance in these places becomes slightly different — one must carefully shift their weight to walk up or downhill. Many consider these sloping parts of the line most difficult, whereas the middle is most frightening due to the increased space between oneself and the cliff edges.

During the months following the accomplishment, I had the opportunity to pick the athletes’ brains to see what was going through their heads at the time and how they have reflected on it since.

Drew Burke, from St. George, Utah: The things that made me interested in highlining were the people involved and the places it could take me… I was blown away by the beautiful scenery and the beautiful faces that encompassed this seemingly scary activity. Soon enough I was hooked, and now after 5 years of highlining, I have been to some of the most beautiful places I could imagine, both physically and mentally.

Sean Englund, from Durango, Colorado: Most nights I would dream about how it would feel to be in an air-space that most people or animals haven’t had the opportunity to be in. I soon came to the conclusion when I first started slacklining that highlining would be my outlet [for] getting into the air like a bird.

Kristen Gershkoff, from Los Angeles, California: I fell in love with the open-minded, free-spirited, loving attitude many of the slackliners embodied… I have always enjoyed thrilling activities and pushing the limits. After sessioning and experiencing my first highline, I knew it was something that I was passionate about and wanted to run with. I haven’t looked back since. The vibes are something indescribable.”

What was your motivation or drive for the project?

DB: My motivation for this project was to prove that anything is possible if you set your mind to it. Five years ago, I never dreamed of doing something as crazy as this… I like to think of big projects like this [being] a way of reminding myself that I can do anything I am willing to work for. And if I can inspire some others along the way, then my mission will be successful. It’s a beautiful thing that a bunch of semi-strangers can get together and build something incredible.

Caleb Beavers, from Boulder, Colorado: The feeling of being in that meditative space is so beautiful; I found myself wanting to push that as long as possible. I rigged the longest line in CO (at the time), and that kind of sparked the U.S. record fires in me… We are basically a bunch of non-pro athletes, and I really felt that it would put us on the map so to say.

How did you prepare and train?

Kaio Apolinario, from Atibaia, São Paulo, Brazil and Long Beach, California: My preparations for this project were long and intense, beginning with the way I spoke to myself, [as well as] trying to not create expectations and being in the desert for six weeks, becoming familiar with the landscape and conducting myself all around highlines, but being hesitant [about] actually getting on them. [I wanted] to save all my energy for that one opportunity that was right around the corner. So I dived into juggling because it felt as if the longer I concentrated on the act of focus for long periods of time, [the more] I could translate that to the line. Juggling two or three hours nonstop takes a toll on the brain.

Alonso Rodriguez, from Ridgecrest, California: I have been walking big highlines [over 300 meters] for about a year now. I started by simply getting comfortable and being able to consistently send big lines. Once I was able to consistently send, I dabbled in speed walking so that I could send fast and efficiently. I am now working on adding blindfolded, walking into my training so that I can truly have slacklining dialed down.

Clayton Underwood, from Albuquerque, New Mexico: With such a big line, there are many factors to consider in terms of safety — one of which is the wind, so we punted our dates a couple of times, which did create a building sense of anticipation and anxiety to some degree. So just trying to stay confident and relaxed throughout the weeks leading up to the project was a challenge in and of itself.

Many of the athletes spoke about this building anticipation and anxiety due to the frequent weather-related push-backs. In the end, all who felt fit to walk found an opportunity to do so. For many, that meant performing early morning or late night sessions on the line.

What was the most difficult part of walking this line?

AR: My session was at dusk when it was difficult to see and I had to walk out layered up. I had a second session the next morning at 5:00 a.m. It was dark when I started the second time and it was mentally difficult being alone on the line with nobody watching from the anchors since everyone was back at camp sleeping. If I had gotten seriously injured during this session, I most likely would not have been able to get myself off the line.

CU: Other than the buildup to taking my turn to cross, I would say the biggest challenge is to remain sure of yourself and not giving into a sense of fear or loneliness that comes with being on a big highline. For instance, if you are in the middle of the line, you are 1,640 feet from either anchor. You may very well be closer to the ground than you are [to] your destination or where you started. If you lose your mental fortitude out there, that can be very scary and isolating. So maintaining that armor and staying focused is the whole addiction of highlining for me, and to have a chance to practice on a 1,000-meter line was just remarkable.

KA: Throughout this walk, there were so many moments in which I would almost fall but I would scream myself back into position… When it got really tough… I began to shout out my friends’ and family members’ names, each name being another step that would get me that much closer to the end.

On Nov. 11, 2020, Rodriguez took the first ascent on the line, successfully walking a consecutive distance of 800 meters before solemnly falling in “the heart-break zone,” not far from the end of the line. On Nov. 12, Apolinario was the first to cross without falling and did so in 70 minutes, followed by Beavers in 50 minutes, then Bankson in 65 minutes. On Nov. 13, a projected wind storm necessitated de-rigging the line. However, just before de-rigging, Blood ran across without a single fall, scoring an expeditious time of 30 minutes. The crew named this record-breaking gap “Weather or Knot, Here We Come.”