Adventure by the Book: 7 Stories to Stir Your Spirit 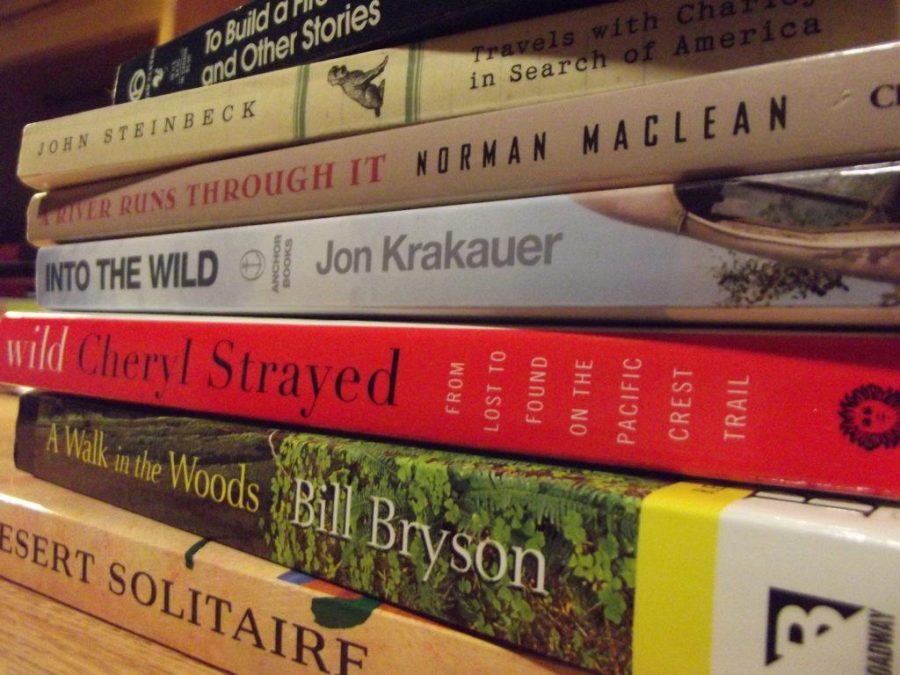 I’m generally not a fan of the portmanteau words of my generation – cronut, mockumentary, brunch, Jazzercise (though that last one is probably more relevant to the bygone spandex days of our mothers).

But there is one mash-up term I can get behind this Spring Break: staycation. Admittedly, it doesn’t take much to convince me to stay in my house and my sweatpants. It doesn’t help that I am, like any proper college student, poor. Vacations, like cronut addictions, require money — lots of money, which I don’t have.

This is far from discouraging, though. There is beauty and comfort to be found in the confines of your bed (and hometown). A staycation geared toward total rest and rejuvenation can be just as fulfilling as charting off to Rome — that is, if you do it in the right way.

While wrapped in your Snuggie, the best way to say “bon voyage” is by book. That is to say, as cliché as it sounds, if you can’t take a trip, read about one. You can spend your time off this March devouring the pages of some great outdoor novels that put you right in the heart of the wilderness without ever leaving your front lawn. This roundup of the seven best adventure books will take you to Anchorage and Moab, Montana and California for a truly fantabulous staycation.

Travels with Charley: In Search of America

Most people will begrudgingly recognize Steinbeck as the author of Of Mice and Men, the classic tale of a man who squeezes to death the creatures he loves most — obviously an appropriate fit for high school students. Well, Lennie, loosen your grip on this magazine because Travels with Charley is nothing like that. In this nonfiction work, Steinbeck drives across the United States in a makeshift camper van, which he affectionately calls Rocinante, with his affable poodle.

The two meet interesting people and see beautiful locales, including Redwood National Park, in what is both a hilarious and profound book. Steinbeck also takes time to reflect on the destruction of our natural treasures, which has a sobering effect. His laments come from a place of pure delight and awe of the outdoors he cherishes.

Best Inspiring Quote: “I was born lost and take no pleasure in being found.”

A River Runs Through It

I was born and raised a fisherman, so Maclean’s book speaks to me on that level, but any person with a heart should be affected just the same. The story follows the author as he navigates through the troubles of life, love, religion, and family with a fly rod in his hand. It’s endearing and powerful.

Maclean certainly pulls in some nice trout on his Montana river, but the true trophies are his revelations. He has a startling way of relating what is most universal and most complex in the simplest terms. The prose has the passion and voice of Thoreau with a better cast. Ultimately, Maclean finds in nature what we all hope to discover for ourselves: deep contemplation and self-reflection.

Best Life Lesson: “It is those we live with and love and should know who elude us. You can love completely without complete understanding.”

It’s easy to write off Chris McCandless as a privileged man filled with reckless desire. But you’d be wrong to do so. Throughout Krakauer’s brilliant narrative, you gain insight into what is not a heedless passion but an intense philosophy of life that the author can only describe as an unanswerable enigma.

McCandless, tired of his life, decides to leave it all: He donates his savings, burns his cash, and hitchhikes across the country. There is no plan, but there is pleasure in the unknown. It’s simultaneously inspiring and terrifying. He ends up in the Alaska backcountry, where he ultimately dies, but it’s a touching ode to the meaning of abandon.

Many have probably read Krakauer’s other works, Eiger Dreams and Into Thin Air, but this piece flawlessly weaves together the narrative in a new way, a sort of manic, out-of-chronology order that is irreplicable and perfectly fitting. His reporting is outstanding, impossibly tracking down the people McCandless interacted with and drawing from journals. The end result is hard to put down — you’ll read this cover-to-cover in a day.

Best Advice: “It is easy, when you are young, to believe what you desire is no less than what you deserve, to assume that if you want something badly enough, it is your God-given right to have it.”

This book has gained a lot of publicity recently, and it’s not at all misplaced. The story, a first-person account of hiking parts of the Pacific Crest Trail (a 2,650-mile stretch from the bottom of California to the top of Washington), moves through the natural landscape with as much ease as the peaks and valleys of the mind. The account is a touching tale of the pain of losing a mother and the determination to regain control over one’s life.

Strayed hikes to empower herself and her readers. It’s the familiar tale of overcoming struggles, but with a lot more bravado and a lot more swearing. She doesn’t hold back — instead, Strayed bares all. You’ll laugh, you’ll cry, you’ll want to hike.

Best Realization: “I kept having the feeling that something was missing. Later, as I walked the road back to the campground, I realized what it was: the fat roll of condoms. Every last one was gone.”

A Walk in the Woods

This book, a precursor to Wild, details the adventures of the author and his friend Stephen Katz as they hike the parallel 2,168-mile Appalachian Trail on the East Coast. The two have a riotous good time as they battle being out-of-shape and out-of-spirits. It is, to be honest, the funniest book I have ever read.

Bryson impeccably balances comic mischief with informational passages about the wilderness landscape and detailed descriptions of the stunning scenery. The wild encounters with fellow hikers, the close calls with animals, and the smuggling of candy bars all make for an enjoyable, easy read. Sure, you could cheat and watch the Robert Redford movie, but I promise you the book is worth it.

Largely a book about conservation, Abbey writes about his time as a park ranger at Arches National Monument (before it was designated as a park). His exploits in Moab are written conversationally, which makes it enchantingly personal to read.

Abbey describes a lot of little episodes — such as rafting down Glen Canyon, searching for wild horses, and learning to be a cowboy — throughout the chapters, which flow well and keep interest. It’s an argument for wilderness preservation presented in a series of poignant anecdotes.

Best Argument for Protecting Natural Landscapes: “We need the possibility of escape as surely as we need hope; without it the life of the cities would drive all men into crime or drugs or psychoanalysis.”

“To Build a Fire”

Yes, this is a short story and not a novel, but I included it on the list for that very reason. If you’re worried about spending your precious hours of Spring Break cuddled up inside with a book then this is a great fit for you. It packs a lot of action in just about 20 pages. The suspense is powerful despite being short.

London tells the story of the desperation of a foolhardy traveler sledding with a dog in the Yukon. The man disregards advice and discovers something of his nature while in nature. The end, which I won’t spoil, is a teachable moment.

Best Nail-Biter Scene: “A certain fear of death, dull and oppressive, came to him. This fear quickly became poignant as he realized that it was no longer a mere matter of freezing his fingers and toes, or of losing his hands and feet, but that it was a matter of life and death with the chances against him.”