Another Crown for the Backpacking Queen: U Student Caroline Himbert Completes the Continental Divide Trail 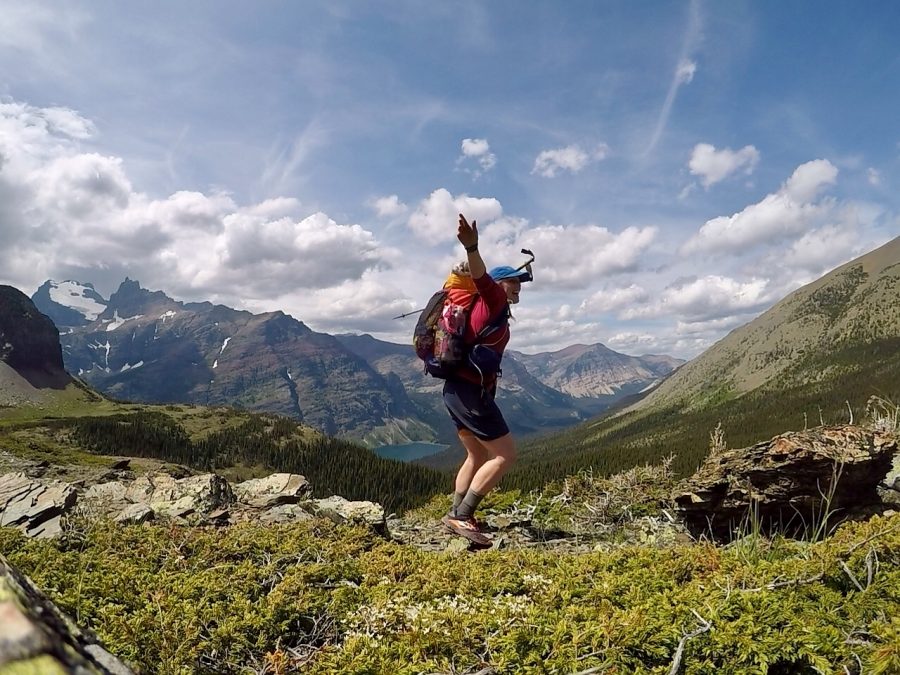 Caroline Himbert, a third-year Ph.D. student in population health sciences at the University of Utah, has added another through-hike to her list. Three years ago, Himbert solo-hiked the Pacific Crest Trail and became addicted. Last May, she set out for a 100-day-long trek of the Continental Divide Trail, which stretches from Mexico to Canada along the Continental Divide for approximately 3,000 miles. “I kind of wanted to suffer again,” Himbert said. “It’s very rewarding when you have these sections you finish and these dramatic changes.”

Snowfall was one of the biggest setbacks. The storms were relentless, particularly in Colorado, and she often had to “post-hole” for over 20 miles through snowpack that would soften throughout the day. “It was very demoralizing at times,” Himbert said. With such unpredictable weather patterns, some stretches of her trip took longer than she had expected, and she had to ration her food appropriately. One day, after getting hit by a hailstorm, she stumbled into town and ate an entire Domino’s pizza, a pint of Ben & Jerry’s ice cream and drank two liters of Sprite. “My stomach was not happy,” she said. Although Caroline had to skip over the Wind River Range, a mountain range in Wyoming, she never fully stopped because of the weather. “If the high route was too sketchy, I would just try to find a lower route.”

Another unique hardship of the trail was dealing with the solitude. According to Himbert, approximately 300 people attempted to through-hike the Continental Divide Trail this summer, and they were all spread out along the five states the trail covers. Himbert clarified that “solitude” is not synonymous with “loneliness,” but it can become more significant over prolonged periods of time. Himbert enjoys hiking alone, but she admitted to appreciating trails like the Pacific Crest Trail where you are often likely to run into other day-hikers and through-hikers. She dealt with the quieter stretches of the Continental Divide Trail by singing aloud, talking to antelope or listening to podcasts during her more desperate moments. “Sometimes it totally drives you nuts … just crying as much as you want is necessary,” Himbert said. However, she had to concentrate on staying on route, and this did not leave much room for dwelling in her remoteness. The trail kept her on her toes — literally — and she was lucky to have a companion during the Colorado section, who goes by the trail name “Grouch.” “Without her, I don’t know if I would have made it through Colorado,” Himbert said. “It’s like a relationship, which can be hard, but a person that you meet and hike with for two days is the same as a friend in normal life because you talk about things you wouldn’t in normal life.” 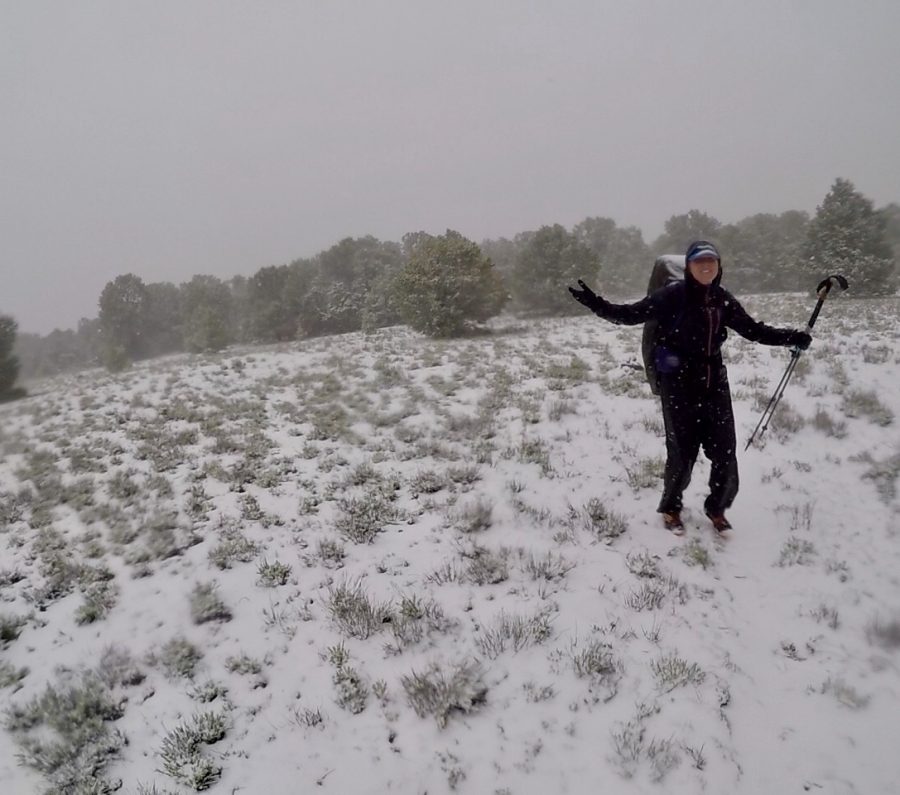 The Pacific Crest Trail requires route-finding skills of its hikers, and the snow enhanced such navigational difficulties. “You get lost every day,” she said. Himbert recalled one particularly challenging day. She and Grouch were hiking through knee- to hip-deep snow, which cut their legs “like razor blades” and caused them to leave trails of blood through the forest. Eventually, they lost each other and remained separated for over an hour. “I thought she may have rolled her ankle,” Himbert said. Just when she had started losing hope, Himbert gave one final scream. Grouch “sort of fell out of a bush on the side.” They stood for a while and cried, then the day got worse. The two were down to their last scraps of food when snow and hail storms rolled in. Another challenge was coping with wet and frozen socks and shoes. Himbert said, “Sometimes the best thing you could do was dip your shoes in the creek to defrost them.”

Despite the wet feet, volatile storms and lack of consistent company, Himbert maintained a positive attitude and a strong will to complete her goal. Every time she summited a peak, she would perform a “summit dance,” regardless of whether or not she had company. “This way, I had at least one positive moment every day,” Himbert said. She kept her Pacific Crest Trail trail name “Earthcake” — which she got from mispronouncing “earthquake” — but people suggested she switch to “Bubbles” or “No-Brakes,” which reflect her bubbly and tenacious personality. “You get more confident and adventurous over time,” Himbert said.

Some highlights of Himbert’s trip were her seven bear sightings. One particular time, she witnessed a male grizzly charge a female grizzly and attempt to kill her cubs so he could mate with her. This was a powerful experience, but Himbert also laughed at how nonchalant the cubs seemed to be throughout the event.

Himbert recalled Glacier National Park as being her favorite section. “It’s a different world,” she said. “It’s like a zoo without cages.” Himbert hiked amongst stunning wildflowers and wildlife for the final stretch of her journey. Three miles before crossing over the Canadian border, she encountered a large bull moose on the trail, which sent her on a detour. One mile before the border, she rolled her ankle. Nonetheless, Himbert persisted. She reached the monument between the U.S. and Canadian borders for what she described as being “a really cool and emotional moment,” which she got to experience on her own.

Himbert has undoubtedly earned the “solo backpacker” title, but she received support from others along the way. In addition to Grouch’s companionship, Himbert could rely on phone conversations with her “trail family” member Alex, who she met last year on the Colorado Trail. The pair hiked together for about 470 miles, and the friendship has lasted. Alex conveniently lives in Salt Lake City. “I could call him whenever I wanted, and he would help me through those tough times,” said Himbert. Her research team at the U also supported her by sending her a package filled with letters, German chocolates (Himbert is originally from Germany) and food frequency questionnaires, which helped her acknowledge the number of cheese blocks she was eating on a regular basis.

Himbert received a lot of support, and in return, she found ways to benefit others. She is currently in the process of raising money for the Huntsman Cancer Research Institute, as she did for the Pacific Crest Trail. “It takes something crazy so that people get aware of something … and physical activity prevents cancer,” Himbert said. She encountered people on the trail who would hear about her journey and immediately donate money. She gives talks at REI and has a website on which people can read about her project and donate. 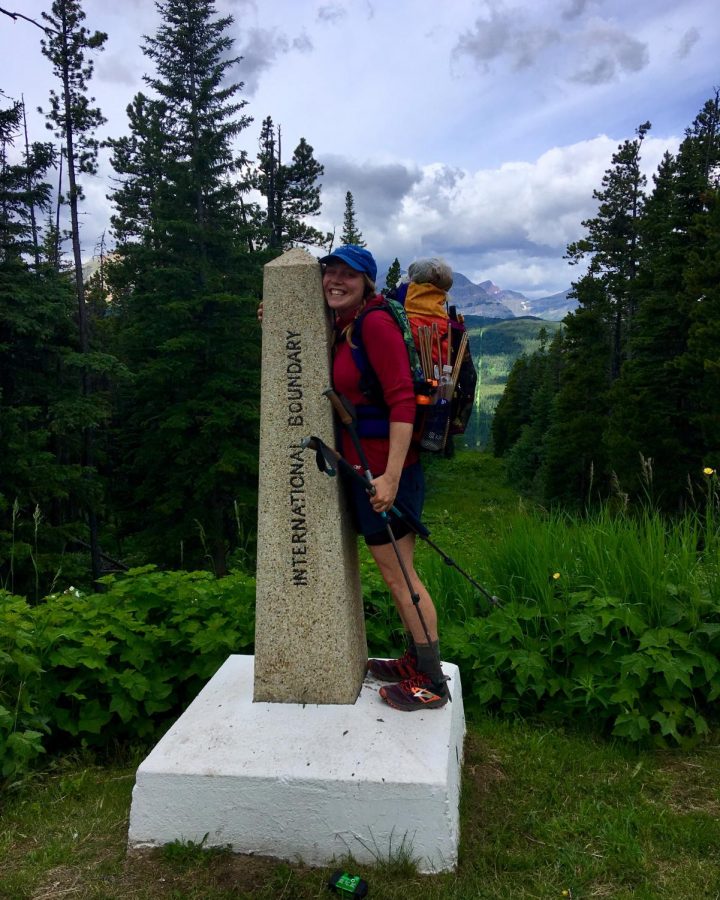 Himbert also fuels the community by inspiring those who hear her story. “There is not just one correct path to take. As long as it feels right, it will get you to your goal,” she said. Himbert’s advice is applicable to everyone, whether their goals are related to work, the wilderness or something else entirely. “Society tells you which is the correct path to take, but there are other ways,” she said. She additionally has smaller bits of trail-specific wisdom to offer. “Don’t spend too much time preparing, because you can’t prepare for everything that’ll happen,” Himbert said. She planned the basic structure of her trek, but avoided concentrating on the specific details of each day. “This time, I just planned food stops, and that’s basically it,” she said.

Within her larger position as a “role model,” Himbert specifically serves as a mentor for fellow outdoorswomen. On the trail, Himbert continued to learn how to cope with, combat and, when necessary, ignore inequality in the backcountry. “Toxic masculinity is a huge issue on the Continental Divide Trail,” said Himbert. Himbert received plenty of demeaning comments from men during the 100 days of her journey. She learned to pick her battles, sometimes choosing to laugh off certain remarks, while other times confronting them. “You do get a lot of pushbacks, but you just have to stand up and say, ‘no, I hiked 50 miles today.’” Himbert claimed that most people are physically capable of completing a through-hike. “Women are actually better though-hikers because they store fat better,” she said. Himbert encountered other women on the trail who would motivate her, appreciate her strength or immediately pull over to give her a ride into town. “Women are very supportive of each other on the trail,” Himbert said. She admitted it was sometimes scary to be a solo female hitchhiker, but argued that fear is not always negative. “Being afraid makes you do better decisions,” she said. Himbert continues to empower women off the trail by serving as an ambassador for Women Who Hike, an organization that connects women throughout the world.

So what’s next on Himbert’s agenda? She has resolved to focus on her Ph.D. dissertation for the next two years, but more through-hiking certainly exists in her future. “I guess the green tunnel is ahead,” she said, referring to the Appalachian Trail, which covers a large span of green forests. Having hiked the Pacific Crest Trail and Continental Divide Trail, she only needs to hike the AT to complete the “Triple Crown” of through-hikes. For now, Caroline will focus on being a student, although the boundless energy she was known to contain on the trails is unlikely to cease, no matter which path she takes. 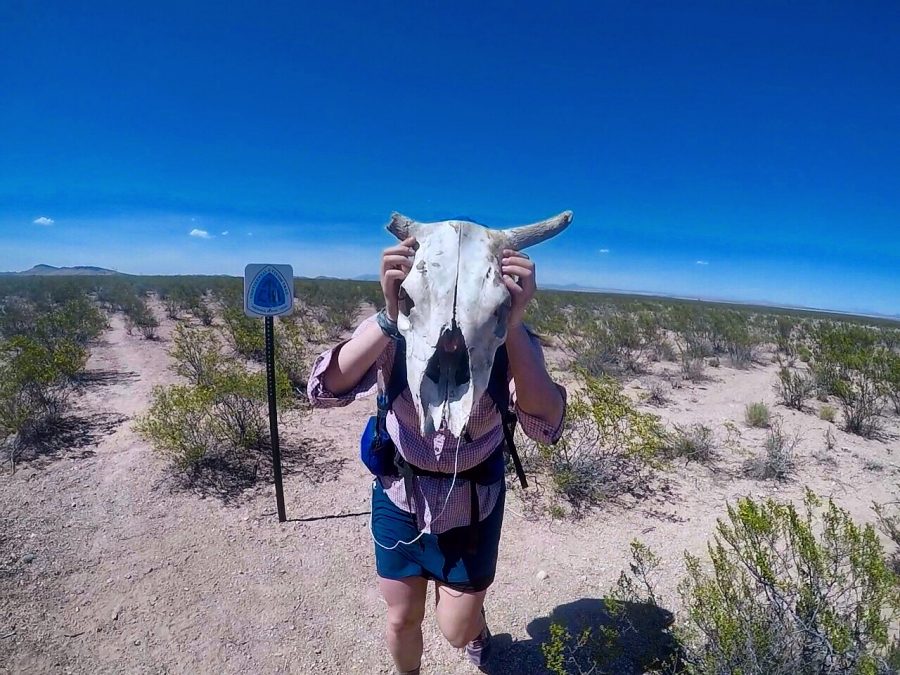