Beyond the Wasatch: U of U Student Hayden O’shea Takes on Vietnam 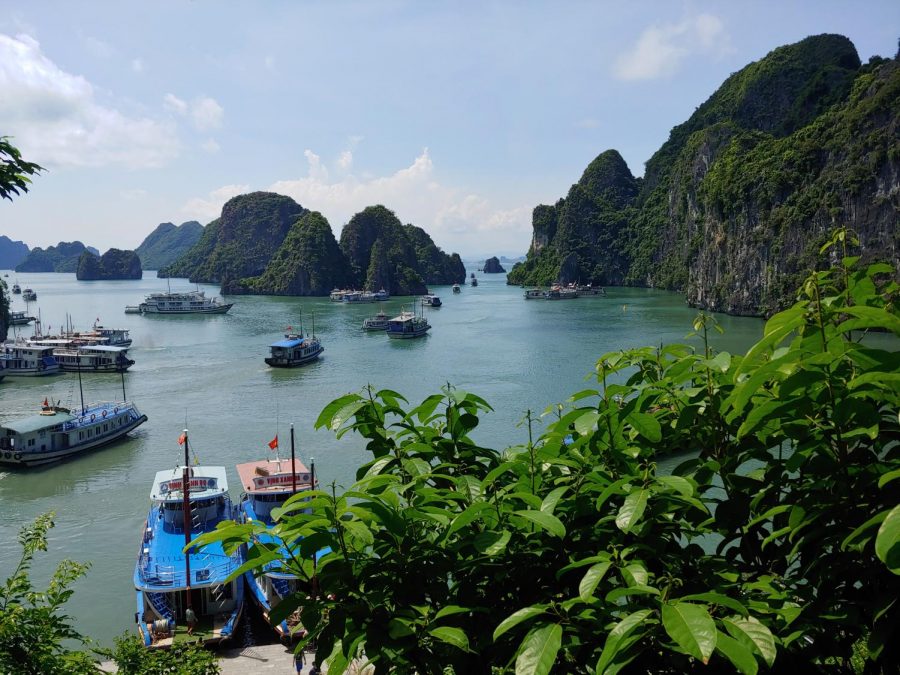 Everybody has their list that they dream up in their minds. I personally have a lot, but one of the most important is the list of places I dream of traveling to. I go to great lengths to travel whenever I have the free time, energy and money. So far I have knocked a lot of places off my list, but one country stood out amongst the rest and this past August I finally got my chance for the trip of a lifetime to Vietnam.

I was ecstatic when I booked my ticket and made my final plans with my dad who decided to join shortly before we left. I had all these ideas of adventurous stuff I would do while I was there. Everything from rock climbing and hiking to eating dinner on a busy sidewalk.

After a long day of travel with a small layover in Hong Kong, we finally made it to Hanoi. Getting from the airport to our hotel was my real first adventure in the country. Hanoi is a concrete jungle that we had to bushwhack through to get where we needed to go. For comparison of the modern jungle, Hanoi is the heart of the Amazon and Salt Lake City is like a wooded area in a city park. One of the first things I noticed is that there is little law that controls the traffic. Dodging vehicles and waving in and out of the sidewalk to avoid people is sure to keep the mind sharp. The second thing I noticed is that Hanoi is an absolute madhouse overall and that I loved it.

Our first two days we saw all the sights in Hanoi, like St. Joeseph’s Cathedral and Ho Chi Minh’s mausoleum. We ate amazing food from establishments that could be considered questionable by the Health Department, but that definitely didn’t stop us. During that time, we also planned our trip to Ha Long Bay, where one of nature’s most prestigiously beautiful areas lie. We noticed that a common way to get to Ha Long Bay, and other excursions to nature, was through a guided tour. So that’s what we did. We bought a spot on a tour that included the bus ride there, a boat tour through the bay, kayaking and a free meal for only 40 U.S. dollars.

I stared out the bus window the whole ride there, focusing on the green mountains and the farmland that Vietnamese people have made a living on for centuries. Once we got to the bay I realized exactly why it’s a UNESCO heritage site. The limestone towers and rocks that rise out of the water are unlike anything I’ve ever seen before. It’s a goldmine in the adventuring climber’s eye. Our first stop on the boat was to hike up flights of stairs to see a cave that was riddled with huge stalagmites. It was beautiful and a nice escape from the unbearable heat of the day. Our next stop was to kayak under a natural rock bridge into a little a small area that was surrounded by cliffs. We pulled our kayak next to one of the rock walls and I threw on my shoes. If I was going to climb on this tour, now was my chance. I climbed an easy vertical route about thirty feet up and was filled with thrill and excitement. I jumped into the water with caution because I didn’t really know how deep it was. It was my only climb because I only brought one pair of shoes and it was time to return to the boat, but my first deep water soloing experience will be one that I’ll never forget. For climbers there is a great amount of potential in Ha Long Bay and I’m sure that potential is being realized more as Vietnam becomes a larger tourist destination.

We finished the tour and returned to Hanoi that night. We had one more day before flying out and it was melancholic feeling because I wanted more time to explore the country. I will return soon and surely have more time. I thought I had experienced culture-shock a lot in my travels, but I can truly say that Vietnam is the largest culture shock that I have ever received and I hope more people can experience this same shock.