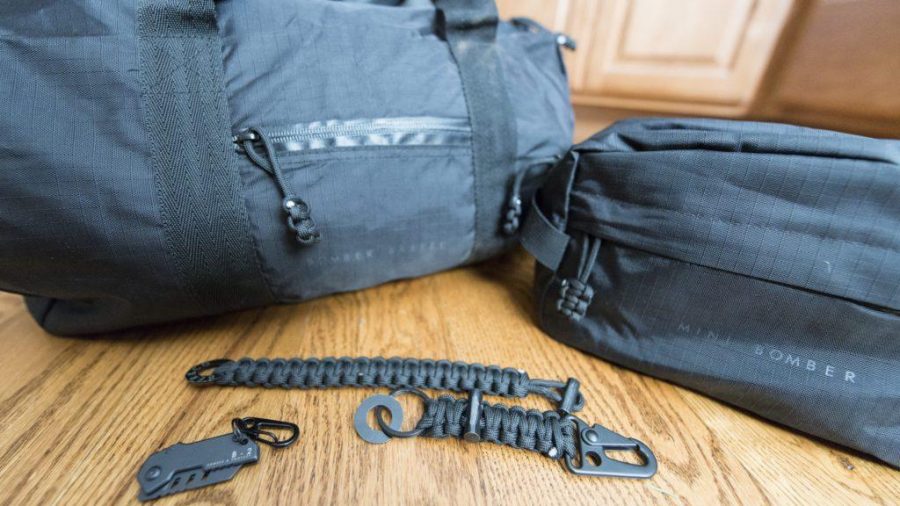 I stray far from the frivolous. Every item I purchase, or think about purchasing, is weighed against the possible experiences I could have for the same cost. Spending $50 to replace the rain jacket I lost last October? No thanks. I’d rather swing by Walmart and grab a dollar poncho before heading up into the Uintas for an overnight backpacking trip.

Needless to say, when Bomber and Company’s package showed up in the mail for us to review here at Wasatch Magazine, I was skeptical. At first glance, these seemed frivolous. I was, we’ll say, half wrong.

In the neatly packed box were five items: the Bomber Barrel (duffel bag), the Mini Bomber Travel Kit (amenities bag), the B-2 Nano Blade (truly tiny pocket knife), Bomber Carabiner Paracord Keychain (exactly what it says), and the Bomber Firestarter Paracord Bracelet (bracelet of woven paracord with firestarter flint). At first sight, all these products absolutely nailed one main factor: design. Everything was sleek, black, and modern, from the cleanly woven paracord zipper pulls on the duffel to the tactical shape of the “world’s smallest pocket knife.” The whole lot was a solid mix of tactical survival with modern, everyday city life. Anyone carrying these items would certainly give off the outdoorsy, bad-to-the-bone, Bear Grylls-esque, “I survived behind enemy lines for three days eating only cactus,” impression.

However, from a first impression, I suspected this is where the products would end. The actual utility of these items seemed like an afterthought. That didn’t sit well with me, so I decided to use these pieces of trendy gear like they were advertised. I ended up with mixed results.

The duffel is easy to rate. It paired with the travel kit to make for a very useful bit of luggage. I toted it along on a weekend backpacking trip to Zion National Park’s Kolob Canyon and found that it served perfectly as my “doesn’t belong in the backpack” bag. That is, the bag with all my snacks, books, chargers, etc., that would not be accompanying me on the trail. I found the bag to be a good, medium size with a simple number of pockets, just enough to hold all your small bits without acting like a puzzle when you have to get something out.

The two paracord items, the bracelet and keychain, also proved at least functional. They clearly were still created for form over function, though, they did still function. The firestarters on both worked (after scraping off the black coating). I found that by wrapping the keychain around your knuckle and using the separate circular striker, you can throw decent sparks off the flint and steel. Of course, if your fire-making skills aren’t already pretty solid, it won’t be of much use.

The B-2 Nano Blade, on the other hand, I found frivolous. I saw no use the tiny pocket knife could provide that a much cheaper Swiss Army knife couldn’t. At least you get a toothpick with the Swiss Army. It only seems useful if you want to feel like a marine while opening your envelopes.

The major downside of all these products ties into their biggest positive. They are all far too expensive. The duffel catches a cool $200, while the paracord products each hit the $23 mark. The hopelessly small pocketknife asks a steep $35. To me, this only reinforces that these products were made for looks, not necessarily use. They aren’t bad, but paying that much for an extraneous piece of gear isn’t something I’m chomping at the bit for. These are targeted towards consumers who are trying to put on a facade and don’t mind paying a little bit more for it. For that market, they’re doing great.