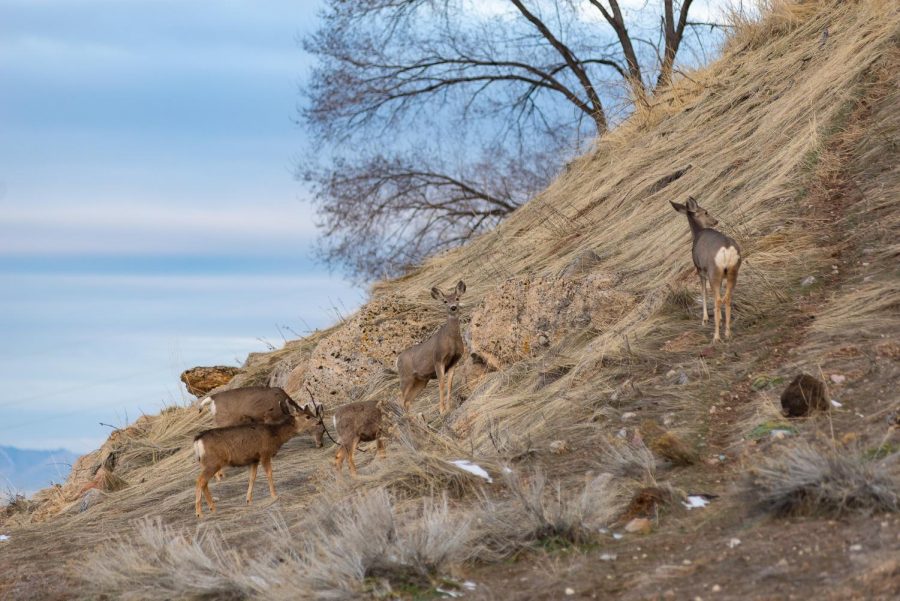 His black coat was the result of a condition that caused an overproduction of melanin which, according to the Utah Division of Wildlife Resources, made Coal “one in several million.”

“When you have something that rare waltzing around the streets of your town, everybody keeps an eye out,” said Moab resident Sherri Costanza. “All around town you could catch glimpses of him.”

Sadly, in December 2019, Coal was found dead in a Moab resident’s backyard.

In January, the DWR announced Coal died of chronic wasting disease, a relatively rare but deadly neurological disorder transmittable among deer, elk and moose. With instances rising across the state, experts worry the disease could severely impact Utah’s deer populations.

“The trend seems to be that it’s slowly increasing,” said Annette Roug, a wildlife veterinarian for the DWR. Since July 2019, the division has identified 16 cases of chronic wasting disease in Utah, six in the Moab area alone.

Chronic wasting disease was first discovered in Utah in 2002 when a hunter outside of Vernal noticed the buck he shot was unusually sickly. Since then, the DWR has identified 112 mule deer and two elk with the disease.

The disorder is similar to mad cow disease, causing brain lesions that eventually lead to death. Infected animals are scrawny and lethargic with droopy ears and excessive drooling.

There have been no reported cases of chronic wasting disease in people, although the DWR advises hunters to not harvest any animal that appears sick. According to the CDC, studies suggest that nonhuman primates are at risk of infection after eating animals with the disease.

Roug said the disorder is unique in that it takes an average of 16 months for the infected animals to actually develop signs of infection. This has some positive and negative ramifications on wildlife populations.

For one, it is highly unlikely that large herds of deer or elk will suddenly drop dead. On the East Coast, bat populations have been devastated by white-nose syndrome, a fungal disease that disrupts hibernating bats, ultimately causing their immune system to eat away at the animals own tissue. The disease has wiped out entire colonies, with the Center for Biological Diversity estimating 6.7 million bats have died since 2006.

“Chronic wasting disease doesn’t work like that,” Roug said. “It’s not like you are going to see as much death, you know, where the whole population just ticks over. It’s much slower.” But because it takes so long for animals with chronic wasting disease to develop symptoms, an infected deer can live a relatively normal life, spreading the disease to other deer for months, sometimes years, before the animal dies.

Still, the rising prevalence has been the subject of concern at the wildlife agency. The division has several strategies to combat chronic wasting disease, including sampling deer populations annually in areas where it’s been detected. If left unattended, the disease could have devastating effects on deer, elk and moose populations. “You’re going to start losing adult animals very fast,” Roug said.

But the division says you can help. While it’s not illegal to feed wildlife, experts at the DWR say putting out corn, hay or other food for deer, elk or moose can cause the animals to congregate. Chronic wasting disease is extremely contagious among these animals and can spread rapidly in large groups.

In some cases, the division says eating human food can actually accelerate the neurological disorder. Only a few weeks after Coal died, DWR officials found a second deer in Moab dead from chronic wasting disease. After an autopsy, biologists discovered corn kernels in the animal’s stomach, a strong indication that it died shortly after eating food left out by Moab residents.

Although Costanza and other Moab residents will no longer see Coal wandering around their town, the beloved deer will live on. This month, residents pitched in to send Coal to Darryl’s Taxidermy in Grand Junction, Colorado.

Costanza, who was leading the charge after creating a Facebook page dedicated to Coal, hopes the taxidermied deer will end up at either the Moab visitor’s center, the library or the downtown museum. Regardless of where he goes, the rare black deer will soon become a piece of Moab’s history.