Climbing Out of a Hard Place 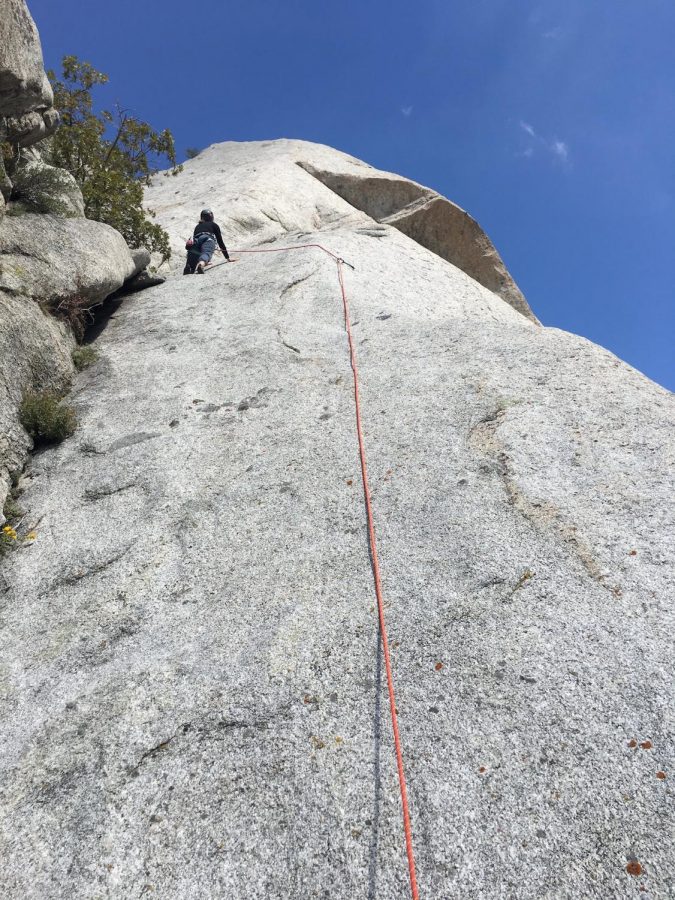 Most people agree that it’s a good thing to expand your comfort zone. It’s exciting to push the boundaries of your hobbies and become stronger. It can also be terrifying, and rightfully so. Sometimes it puts us in scenarios we never wanted to be in.

It was the fall of 2019 — the week before fall break. My climbing partner and I had been climbing together for about two months, maybe fewer. We lived across the hall from each other and both had Fridays off. If you enjoy recreation in the Wasatch Mountains and aren’t partial to big crowds, it’s crucial to have at least one weekday to go out and play. On this particular day, we had decided to try to climb the Fin Arete at the mouth of Little Cottonwood Canyon. It’s three pitches of stellar friction climbing, which is to say there are very few footholds, or any holds for that matter. I consider myself to be an intermediate slab climber. Growing up in the Salt Lake valley, I have climbed my fair share of that white, temple-building granite, so I felt confident attempting this route for the first time. It was breathtaking just to look up at 400 feet of pristine, rough granite from the bottom. It was my first time leading on a multi-pitch slab, meaning I was clipping into bolts as I climbed upwards. Usually, bolts are drilled into the wall at least every 10 feet, so the maximum fall a climber could take is 20 feet. On this particular route, the bolts were much more spaced out, with 15 feet or more between them.

So picture this: you’re 50 feet off the ground, and the only thing holding you to the wall is the friction between the surface of the rock and the rubber on your shoes. I always say that slab climbing doesn’t look like it should work, and yet it does. Rather, it works most of the time, and least of all when your legs are shaking with adrenaline. I took two enormous falls that day, the second of which resulted in a broken helmet and a concussion. I still have the bump on the back of my head almost nine months later. My skull wasn’t the only thing that took a hit that day — my confidence while climbing was absolutely decimated. I couldn’t seem to shake it off. Every time I got up on a wall, I felt unbearably nervous. Mental strength is huge in climbing. If you’re not able to trust yourself and the system, it’s nearly impossible to perform. Frankly, I was embarrassed. I wanted to climb, but my mind wouldn’t let me. All I could think about was the sensation of my feet slipping off and falling 30+ feet down the wall. My partner and I didn’t want to climb the same routes anymore, mostly due to how timid I was feeling. Because of this and the coming winter, I stopped climbing completely for about seven months.

Winter is a good distraction for me — I’m an avid skier and beanie wearer. However, as we all know, the season got cut off three months early this year because of COVID-19. It was springtime, and without skiing, I started to think again about climbing. My friends encouraged me, and I began with bouldering at the Student Life Center again. I still lacked confidence, as well as strength, due to the hiatus. It wasn’t until the end of June that I truly felt like I wanted to get back outside of my comfort zone and climb some rocks. My partner, a part-time truck dweller and a full-time climbing enthusiast, proposed Steort’s Ridge. Steort’s is another 3 pitch climb. Located near the road in Big Cottonwood Canyon, it’s a much more friendly ascent with a plethora of hand and foot holds. The 250 foot wall faces east, making a lovely and shady evening ascent. The climbing felt good! I noticed myself climbing more slowly than before and listening to my body; I had a certain clarity and awareness that I hadn’t felt for a long time. I was able to enjoy the scenery too, although it would be hard not to. The third pitch features a sharp arete and thrilling exposure. It reminded me that climbing is a sport I love.

I don’t regret taking the time off. I started out feeling so frustrated with myself and climbing ceased to be a source of joy. The comeback couldn’t be forced. I had to wait for the right time and be patient with myself. With prevalent uncertainty and shutdowns due to current events, many of us have been forced to change plans or take unexpected breaks from things we love. It’s easy to feel disappointed and frustrated. I encourage us all to slow down and know that when the time is right, we’ll make that comeback.