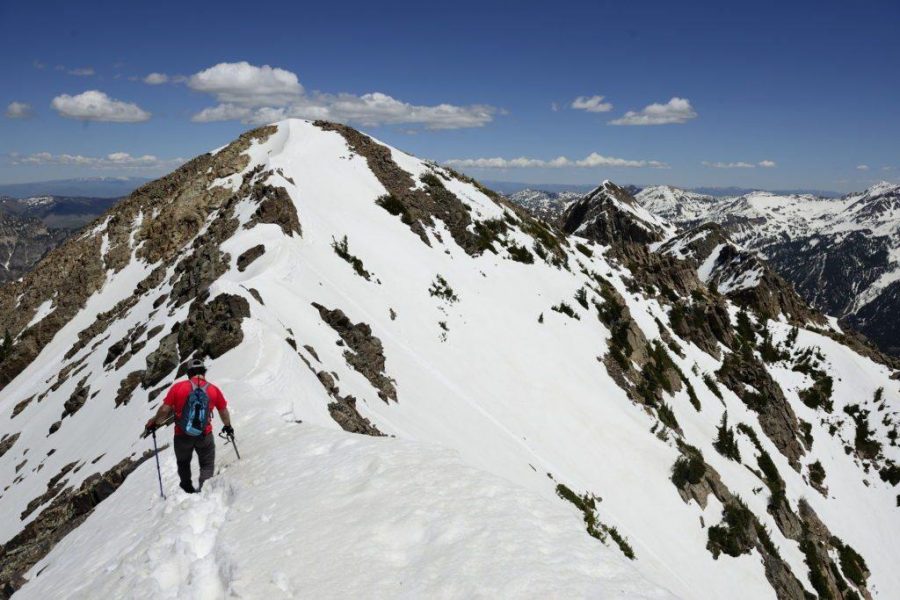 Nik and I successfully summited the top of Twin Peaks Salt Lake on a beautiful blue day. After our first adventure was unsuccessful due to the blizzard that turned us back we were on the prowl for conquering that mountain. I learned how to glacade on the decent.

Ever heard of Sir Edmund Hillary, Tenzing Norgay, Reinhold Messner, or Jon Krakauer? These are the men who helped define mountaineering, the sport of climbing tall mountains. Each stepped foot on the tallest mountain in the world — Everest. They were united by the desire to summit mountain peaks, a feeling that drives all mountaineers.

To launch my own mountaineering career, I decided to start locally.  With a climbing colleague, we set out to tackle Broad’s Fork Twin Peaks last June. Although the elevation of 11,329 feet is nowhere near that of the breathtaking elevation of Everest (29,035 feet), we were faced with challenges.

After reading previous mountaineers’ advice on which route to take on Mountain Project, we decided to start at the S-curve in Big Cottonwood Canyon. We discussed the equipment needed to go on this expedition — sunglasses, sunscreen, hiking poles, crampons, a mountaineering axe, a probe, a beacon, and a shovel. We were forced to bail on our first attempt due to a snow storm, so the next time we began before the sun came up on a cloudless day.  The hike was straightforward on a dirt trail for about 3.5 miles until we hit the snowfield. We were both instantly blinded by the ivory blanket reflecting the sun.

We pulled out our glacier glasses and continued the ascent. Shortly after we stepped onto the snow field, the steepness made it difficult to keep our balance. We switched from hiking poles to the mountaineering axe and strapped on crampons. When mountaineering, there is often no trail to follow. Instead, you must assess the terrain and find the safest way up.  We saw previous slide paths from avalanches and made our best path zig-zagging through them.  The soft snow made it so we were postholing, meaning each step brought us waist-deep in the snow.

We made it to the ridge, cautious with each step between the 2,500-foot drop-offs on either side. Then, we began the final ascent, approximately 500 feet to the summit.  The closer we got to the peak, our hearts were pounding knowing we were almost there. At last, we summited East Twin Peak and gaped at the impeccable view. While catching our breath, we took our crampons off to walk around on the peak. Once we saw the other peak tantalizing us 528 feet away, we decided to finish the job.

We walked slowly on the thin knife blade of a ridge and enjoyed a break on the other peak. While taking photos, we heard a roaring sound echo around us, which sounded like a locomotive steaming by. It was an avalanche that broke loose on O’Sullivan peak a half-mile behind us and crashed down in the valley below.  That was our cue to exit and make our way back down the long and tedious descent.

Once we reached the open snow field, we could glissade down using our axe to self-arrest as we sped down. We removed our snow gear and stepped back onto the dirt trail, a few miles from our cars. At the journey’s end, we got in the car and looked back up toward the peak, neither of us believing the amazing climb we just endured. After mountaineering to the top of my first peak, I understand the desires each of those wild peak baggers have. Mountaineering is an addictive sport.

Corrected from “These are the men who helped define alpinism, the sport of climbing tall mountains.” on 4/12/17.