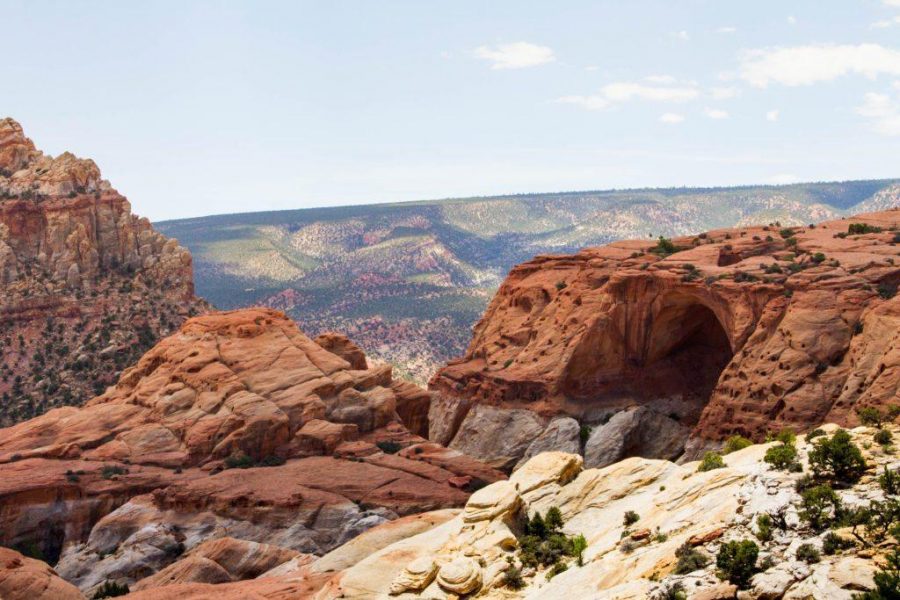 As the National Parks Service celebrates its 100th year this month, we decided it’s time to move the spotlight from the popular parks to the lesser-known. Read about some of our favorites and plan your next trip.

Located in Southern Utah is Capitol Reef, a national park filled with breathtaking views, diverse hikes and miles of magnificent red rock. Despite being part of the “Mighty Five” Parks, Capitol Reef is generally less crowded than Utah’s more famous parks, Zion and Arches. That makes Capitol Reef a relaxing get away from the hustle and bustle of tourists. Visitors to this park can take advantage of over a dozen day hiking trails and even more back-country hikes.

The Fruita campground is the only developed campground at the park, If you’re unable to get one of 71 sites, you’re not out of luck. Two primitive no-fee sites are first-come, first-serve and back-country and BLM campsites are abundant in and around the park.

Sulphur Creek Falls is one of Capitol Reef’s hidden treasures. While the falls is not listed in the park’s brochure, rangers can provide directions to the trailhead. Start at the visitor’s center and follow the creek for about a mile until you reach the falls. For a longer hike, visitors can reverse their direction and start at Chimney rock for a six-mile hike. The Chimney Rock trailhead is three miles west of the visitor’s center and easily accessible. Be prepared to get wet as you hike through the creek. Also, with no shuttle service, you’ll have to stash a car at the end of the trail or convince a friend to drive you back. The Sulphur Creek Falls trail is a great way to see the different layers of rock and sandstone that have built up over millions of years. With almost zero elevation gain and plenty of shade, you’ll wonder why you’re the only ones on the trail.

Cassidy Arch is a short but strenuous hike. The natural sandstone arch is beautiful and there are great vantage points along the way for taking pictures. The hike begins at the Grand Wash trailhead at an elevation of 5,398 feet. Once at the arch, you’ll hit 6,036 feet. Looking down into the canyon, the views are spectacular and the air feels amazing. You’ll gain elevation quickly, but the 3.5-mile (round-trip) trail is wide and the view from the very top of Cassidy Arch is rewarding.

In April 2015, Capitol Reef officially became a Gold-Tier International Dark Sky Park. With its high elevation, low-smog and lack of light pollution, visitors to this park enjoy sights like the Milky Way, and countless constellations. There are also many ranger-led night hikes and astronomy programs to take advantage of.

In the Fruita district of Capitol Reef the orchards are abundant with apricots, cherries, peaches, apples and plums. Visitors to the park are welcome to stroll through the orchard and pick ripe fruit. Harvesting starts in June with cherries and ends with apple-picking in early October. Eating the fruit while in the orchard is free of charge and a self-pay station is set up for those that want to purchase fruit to take with them.

Off the beaten path in North-Central Washington off of isolated Highway 20 is a forgotten beauty. Founded in 1968 after attempts for national park designation since 1897, it showcases the best the Cascades have to offer with paved roads and all the amenities that come with national parks. Gnarly glaciated peaks, mountain lakes and lush vegetation dot the park, and recreational opportunities range from mellow hiking or birding to arguably the toughest mountaineering objectives in the lower 48.

Hozomeen and Gorge Lake Campgrounds are great lakeside spots to car camp and relax or set up base for outings higher up in the park’s mountains.

Many great hikes begin at the end of a high road near Cascade Pass. A 3.7 mile jaunt from the parking lot ends with great sprawling views of the park at Cascade Pass proper. For those willing to rope up and take on the challenge, Sahale Peak sits just above the pass and has a short, but exciting, approach with glacial travel and exposure.

Within its 789 square miles, there are endless ways to build a unique adventure. As a bonus, you don’t need to stray far to drop by Vancouver, B.C. or Seattle. Although 13 hours from Salt Lake City, it could make for a great road trip for fall or spring break to get out of Utah and check out beautiful Washington.

Black Canyon of the Gunnison, Colorado

A rolling carpet of verdant hills unexpectedly plummets 2,000 feet to a roaring river. Welcome to Black Canyon of the Gunnison; Colorado’s hidden national park. Located 6 hours from Salt Lake City, this park sees around 200,000 visitors each year, about four percent of the 4 million who wander through Rocky Mountain National Park just a few hours west. Stand on the edge of sharp cliffs or descend where the sun hardly ever touches into this canyon’s heart to discover one of Colorado’s lost treasures. Bonus: remoteness makes for incredible stargazing.

Three developed campgrounds means you’ll never fear being without a campsite. Most are first-come, first-serve but be aware, the North Rim has the least amount of spots and is located across the canyon-a few thousand feet as the crow flies, but a two-and-a-half hour drive. It’s best to head to the 88-site South Rim near the canyon’s edge or at the East Portal by the river if you’re getting a late start. Back-country camping is also permitted in the inner canyon, but very strenuous.

Stroll through a juniper forest to intermittent views of the deep canyon below. Beginning at the North Rim Ranger Station, this trail will lead you past jaw-dropping views (including Exclamation Point at 1.5 miles) ultimately to Green Mountain (3.5 miles), which provides a view of the canyon slicing through the green hills. The San Juan Mountains and Umcompahgre Plateau are also visible.

They’re not kidding when they say your ankles and knees will be buckling at the end, this hike is a doozy. Dropping 1,800 vertical feet in a mile from the South Rim Visitor Center, you’ll half-walk half-slide down rocky steps and talus slopes to the bottom of the canyon. This is the easiest of the half dozen established trails leading to the trail’s bottom. Take your time at the river, scrambling over boulders and river-side plants (look out for poison ivy), then begin the ascent. Bragging rights are worth it as you stand beside the less adventurous snapping shots near the return trail’s end at a lookout spot.

Gunnison is for the extreme adventurers. Most climbs are between 5.10 and 5.13, with many requiring aid and all committing multi-pitch traditional climbs. That being said, it’s hard to look at the walls and not hear them calling to be climbed.

For those with sore legs from the inner canyon hikes, sitting in your car and looking over the edge is the perfect way to finish your time at the Black Canyon of the Gunnison. Several look-out points are located right beside the road, which hug the canyon’s edge.

Veiled in mystery and surrealistic in form, Bryce Canyon remains among Utah’s least visited national parks, overshadowed by surrounding natural attractions. This preserved geological wonder encompasses approximately 35,000 acres of the Paunsaugunt Plateau, and consists almost entirely of its mistakenly-named focal point, (you guessed it!) Bryce Canyon. The park’s so-called canyon is actually an expansive depression comprised of seemingly endless intervals of goliath amphitheaters and hoodoos, colloquially dubbed the “Silent City.” It is easy to become awestruck by the brilliant arrays of color and alien contours of the park’s ubiquitous stone columns and monoliths.

Bryce Canyon contains eight interceding hiking routes that allow for a customizable exploratory experience. These include the novice Mossy Cave, Queen’s Garden and Bristlecone Loop trails, to the more strenuous Fairyland Loop and Peek-A-Boo Loop routes. Over ten miles of this terrain is compatible with cross-country skiing and snowshoeing during the Winter season.

Curious travelers seeking to survey the park at a distance gravitate toward the scenic road, which provides access to overlooks of 13 of Bryce’s most striking amphitheaters (including Inspiration Point, Sunrise Point and the massive Natural Bridge arch).

Due to its isolated location, Bryce Canyon allows for unmitigated darkness at night and serves as among the best stargazing destinations in the nation (7.4 magnitude night’s sky and approximately 7,500 stars visible to the naked-eye).