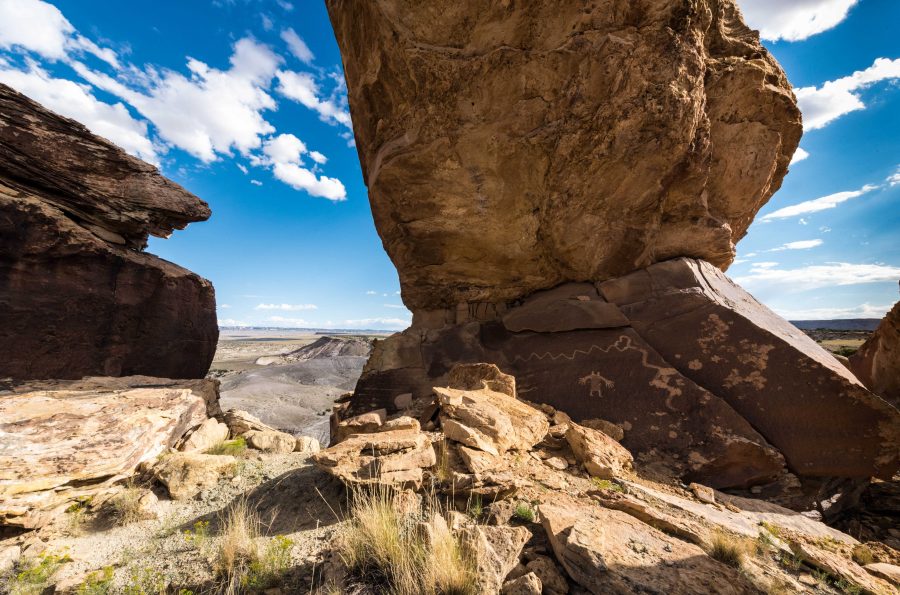 The Emery County Public Lands Management Act is a bill proposed by Senator Orrin Hatch and Representative John Curtis. It aims to redistribute the ownership of a large portion of land in southeastern Utah.  The bill is aimed towards conservation because it would provide permanent protection to more than one million acres of land in Emery County. The main points of the bill are to designate 383,380 acres of land as National Conservation Areas, 578,000 acres of land as wilderness, establish Jurassic National Monument, and expand Goblin Valley State Park by 9,350 acres.  The bill is marketed as a compromise between conservationists, recreationists, and extractivist industries, showing, in Governor Gary Herbert’s words, “an example of what happens when everyone works together”.

My first impression of the bill seemed promising: a big step forward in the conservation world.  Why then was it receiving so much backlash from environmental groups all over Utah?

I met with Olivia Juarez, the Latinx Community Organizer for the Southern Utah Wilderness Alliance (SUWA), to see what the controversy was about.  SUWA is a nonprofit organization focused on the preservation of Southern Utah’s pristine red-rock landscapes.  The Emery County bill is currently at the top of their priority list.

To understand the specific jargon of the bill, it is important to know the difference between wilderness land, conservation areas, Bureau of Land Management (BLM) land, and Forest Service land. The BLM and Forest Service are government agencies that are currently in control of managing the land the bill addresses. Designated wilderness areas prohibit any roads, motorized vehicles, or developed infrastructure within their limits. They are still managed by the BLM or Forest Service, but you can count on peace and quiet in these truly wild landscapes.  Hiking and horses are the only ways these lands can be accessed, and the land is left untouched by permanent human development.  A Wilderness Study Area (WSA) is a candidate for wilderness land and is treated the exact same as designated wilderness.  Conservation areas are similar to wilderness but a bit less stringent, and have strong cultural, architectural, or historic importance.

Although there are a lot of supporters of this bill, there are quite a few areas where SUWA feels it falls short.  The bill designates 26,192 acres of Labyrinth Canyon as wilderness but fails to recognize another 138,000 acres of the canyon and surrounding areas, leaving the lands open to development.  The area that is to be designated as wilderness is already protected as a Wilderness Study Area. Additionally, all WSA land that is not designated as wilderness under the bill will be released and all current protections will be lost. This would roll back existing protection on development and restrictions on motorized routes on currently wild lands.

Like Labyrinth Canyon, the bill also recognizes only a small portion of already-protected area in Muddy Creek as wilderness, leaving over 100,000 acres of undeveloped land without protection.

The bill proposes to change Natural Conservation Areas to National Recreation Areas, which is a step backwards, according to SUWA.  This change signals to the BLM that the main purpose of the land is for motorized and non-motorized recreation, and that they should prioritize the land for these purposes.  The bill ranks recreational development of the land above conservation efforts, and fails to issue any protections to the wilderness-eligible San Rafael Badlands.

The bill designates 9,350 acres of public land to Goblin Valley State Park, meaning people would now have to pay a fee to access this land and infrastructure would be developed upon it.

After learning SUWA’s take on the proposal, I asked Juarez if, in her opinion, there were any positives to the bill.  “No,” she said, “It is worse than the status-quo.”  She claimed that the land is currently a “wild, safe, and desirable place” and the new bill would “undo a lot of these current protections.”

“We don’t really know what is next or when it will be” stated Juarez when I asked what the next step in the bill’s process is. “It could go to the floor at any point for a vote or it could be included in a packet of bills”.  SUWA is working hard on keeping the pulse alive and educating people on what is at stake.  “The San Rafael Swell is so important and special to people in the Wasatch.   It is the closest place for people to disconnect, unplug, and heal… It is especially important to Utah’s minority community and people of low-income, making wilderness access available to the people who need it the most.”

Whether or not you should support this bill depends on where your values lie.  Motorized recreationalists and economic developers would benefit from the passing of this bill.  People who want to preserve the land in its original state and continue to access the beautiful, remote, and wild landscapes as they are should work alongside SUWA to speak out against it.