Concealed from the public eye by manifold columns of industrial developments, lies a preserved slice of the Salt Lake Valley wasteland: strange, beautiful and ripe for exploration. I stumbled upon this sublime place while cycling to see the Jordan River Parkway to its endpoint, though found myself halted and mesmerized by the fervent vitality of this hidden oddity.

According to postings scattered around the area, this isolated landscape was initially purchased by Salt Lake County in the early 1970s in deplorable condition, having previously been used as agricultural grazing land. After its cooperative community restoration in 2008, the area was cleared of invasive plant species and revitalized, thereafter dubbed the Redwood Nature Area. Encompassing 63 acres of restored natural wetlands, the Redwood Nature Area now serves as an asylum for many species of wildlife and is a habitual stop for migratory birds. More incredible still is that this flourishing arboreal landscape is merely a single pit stop along an extensive network of riverside wetlands, all connected by the winding Jordan River Parkway.

Constantly meandering parallel to the Jordan River, the Parkway spans over 50 miles of paved asphalt and cuts through Utah, Davis and Salt Lake counties. By bike, the extensive trail provides unmitigated access to major settlements between Utah Lake and, in its connection to the Legacy Parkway Trail, the shores of the Great Salt Lake.

For the Salt Lake Valley’s burgeoning cycling culture, the Jordan River Parkway is a safe and beautiful alternative to navigating the perilous urban landscape within our growing inner-city communities.

Adventurous cyclists exploring the Redwood Nature Area must be conscious of the goat heads: sharp, multi-pointed clusters that grow along invasive puncture vines adapted to dry climates. Due to its close proximity to the river, the Parkway is riddled with these tube-deflating monstrosities. Since avoidance is difficult, if not impossible, I recommend bringing along a hand-pump and patching kit in preparation for the likely misfortune of a flat tire, particularly if you are anticipating a longer journey. 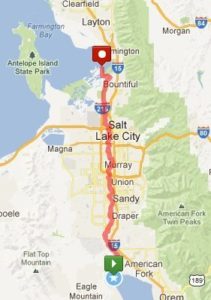