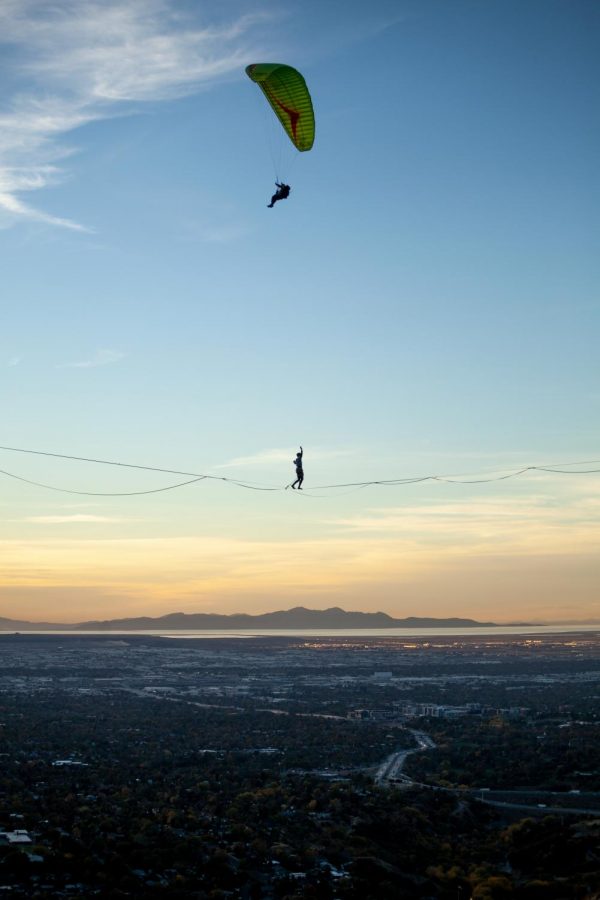 The sun began to set as I went out on the line. Steve Mammano was a couple hundred meters further up the canyon and getting ready for take-off. We were both to start at separate sides of the mountain, Steve on the north side and I on the south. Then we would gradually meet in the middle for a perfectly-timed photograph. Everything was in position and I was getting anxious — this was the last night that the three of us Wasatch staff members were able to meet before the projected high winds and cold weather of the following days would necessitate de-rigging the highline. Steve was ready with his paraglider, Kiernan Dunn had her camera in position, and I, with my bare feet and harness, was brimming with excitement.

One week prior, my “monkey” friends from California and Salt Lake City had rigged a 230 meter-long highline off the trail to Grandeur Peak and left it up to play on for the following days. We had been sure to notify our winged companions about the project and attach streamers to the line for increased visibility. Nonetheless, I had no idea how frequent flights off Grandeur Peak were, so I hadn’t expected what followed.

During that week that the line was up, I experienced moments of pure awe and joy while walking above the Salt Lake Valley with paragliders and speedflyers sharing the air all around me. This was surely a first, as I had never seen such an activity so close and in-person, let alone while on a highline. The speedflyers, with their smaller, quicker parachutes, would conduct barrel roles low to ground and then maneuver under, around and above the highline. Meanwhile, the paragliders eloquently flew above the line, catching the wind perfectly with enough time to holler and say hello to the person floating beneath them. On one sunny afternoon, we experienced the delight of watching six speedwings take off and fly right above us. Sharing the same airspace with so many pilots was breathtaking, and it was even more rewarding knowing that their enthusiasm for combining the sports matched ours.

It was getting late, and we were losing sunlight. I had just begun walking, Kiernan was ready to start filming and Steve was preparing his paraglider. 230 meters is a respectable length for a highline — in fact, this line broke the record for the longest highline in Northern Utah when we first rigged it last spring but was surpassed by our 376 meter-long highline on Lone Peak. Walking towards the middle of such a long line was no easy task. Finding the ideal spot on the line at the right time was difficult, to say the least. In the end, however, things could not have gone better. Steve managed to fly directly above the middle section of the line, and I managed to occupy that same space right below him. Due to COVID-19 restrictions, we had been working and attending our Wasatch meetings remotely. As Steve flew over, we hollered to one another, and I realized that this was my first time seeing and communicating with him in-person. Person-to-person, pilot to skywalker, we were without a doubt socially distanced.