Ice Climbing Across the Desert 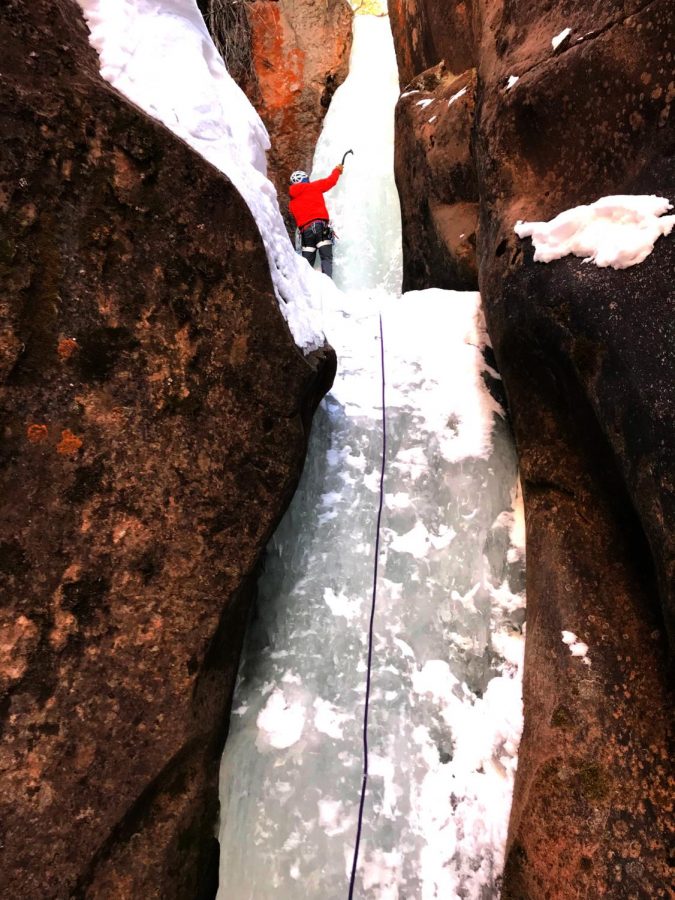 Throw one hammer in, and then the other, followed by the exact same movement of the feet. Repeat this until you reach the desired destination — which is usually the top. You take a look around and instead of seeing jagged, chossy granite or limestone mountains, you see sandstone walls that range in colors of purple to orange towering above the ground with heavy omnipotence. It’s a surreal scene, but this is what ice climbing in the desert of Southern Utah looks like.

Southern Utah is renowned for its sandstone climbing and offers some of the most beautiful formations in the world. The area of Indian Creek alone draws thousands from around the globe to come and test their skills. Yet, most people wouldn’t think to travel south for an ice climbing adventure. If you’re looking for a place where you can tick off hundreds of mixed and ice routes, you may want to look at Montana or Canada instead. If you’re looking for a moderate adventure that is low commitment and you already happen to be in the area, these routes may be worthy.

Imagine climbing one of the most iconic, sandstone big wall routes in the world in Zion National Park one day and then doing an ice climb the next day in the same park. You’ll for sure be very cold, but it’s possible to do. There is a route in Zion that has gained notoriety since it was first climbed in the 2000s. This route is called “Zicicle” which is more than a fitting name for the area. This route made the cover of Climbing Magazine in 2009 and is portrayed as a thin piece of ice that is transparent enough to see the rock behind it. From afar, it’s a stunning line that’s too attractive for the hardened ice climber to miss — but up close and on the route might be a different story. There is also a short film that portrays this route and is simply called “Desert Ice.” It is on Youtube published by Arc’teryx and is definitely worth watching.

When asked about Zion in a Rock and Ice interview, Andrew Burr said that “nobody has put the sweat equity into looking, because it’s kind of gnarly.” Burr also went on to mention in the interview that Zion might be the “greatest water ice discovery in the U.S. in the last 10 to 20 years.” Andrew Burr is a big name in the climbing community and not that many people in Utha know more about climbing than him — considering he has written multiple guidebooks and is a stellar photographer.

Just like Burr mentioned, finding new climbs in Zion has probably been halted by the ruggedness of the backcountry. There could be a goldmine of ascents waiting in the park and all it would take is a good amount of bushwhacking and recon.

Zicicle is rated as WI5 and consists of two pitches. First, it is worth mentioning the way that ice and mixed-climbs are graded. Ice has grades that always begin with the acronym WI followed by a number. Currently, the grades go from WI1 to WI8. The grades for mixed-climbing are slightly different but since none of these desert ice climbs are mixed climbs yet, there is no need to mention these grades. The website SummitPost only lists six ice climbs throughout the Southern Utah desert, Zicicle being one of them. Of course, there are most likely more routes that have been established but have not yet made it into the public sphere. Unfortunately, you probably won’t find a guidebook for ice in Zion anytime soon, but according to Mountain Project, there are a total of three ice climbing routes in the park. One is, of course, the Zicicle, but there is also an addition to that route called Below the Zicicle, which is pretty self-explanatory. Doing this climb before Zicicle adds an extra two pitches to the climb. It’s graded WI4 M5, which means there is mixed climbing added to it. The third route in Zion is beautifully named Nuclear Sunrise. This route seems to be challenging Zicicle in an ice popularity contest. It’s 400 feet and is split between two pitches, making each pitch an exposed 200 feet of WI5 R climbing. The “R” rating is probably enough to turn many people away. It’s probably a route to be had by a knowledgeable and experienced ice climber. These three routes make up the trifecta of ice climbing in Zion, but as mentioned before, there is bound to be more out there.

Another couple of routes lie just outside of a town called Kanarraville which is between Cedar City and Saint George on I-15. The routes are simply called Kanarraville Falls. There is a north pillar and a south pillar. The north pillar is seemingly the more reliable climb when conditions are not the best, yet they both are stunning lines. They’re short for the typical ice climbs at only 60 feet and seem to be very low-committing. They probably could be done in a half-day. The north climb is the only one that has been published and is graded WI4. A user on SummitPost said that the south seems to be around WI4+ or WI5.

Close to the Kanarraville falls is a route called Cedarcicle, which is also a fitting name because of the proximity to Cedar City. It’s only a one-pitch climb that leads to about 80 feet, but this route seems to be one of the more popular routes you can find in the desert. It is a beautiful waterfall of ice that is in the dead center of a multi-colored, sandstone amphitheater. This climb is probably one of the more intimidating ice climbs in Utah. It is graded at WI5-6, and the hardest route in Utah is WI6 M8. This route seems to be a contender for a challenging climb.

Cedarcicle is located in Cedar Canyon, which also houses five other ice climbs close to Cedarcicle. The routes Ashdown Gorge Flows and Carmel Cubes seem to be popular routes despite their higher grading.

In Parowan, Utah — there is another popular route to be had for the local desert rats. Hidden Haven seems to be an epic climb that is surely worth looking at. It has almost four stars on both SummitPost and Mountain Project, which is surely something to take into account when ice climbing. You can send it in a total of four pitches to gain 400 feet, and this climb is graded WI4. It’s a stunning line that is surrounded by orange and red sandstone and seems to follow a waterfall until it exits out of a slot canyon type formation. Though the pictures don’t do it justice, this route could inspire people to learn ice climbing just to do it. In the comments of Mountain Project, one user called the line, “One of the most aesthetic ice climbs I’ve ever done. Wonderful situation, climbing ice in a red rock slot canyon.”

One of the last routes in Southern Utah is a route called Cascade Falls. This route doesn’t seem to be incredibly popular among the users of SummitPost, but it may be worth it if you live close to the area. The climb is broken up into three pitches and is graded at WI3. Somewhere out there, there is a guidebook that lists this climb and another climb called Bullion Falls, but it appears that the latter route has escaped the public eye of the internet. There is not much info on either of these climbs online, so if you come upon the right guidebook you may be able to find out more about it.

These climbs make up the sum of known ice climbs that are located this far south in Utah — though there could always be new climbs being put up. There is one more ice climb that should be mentioned, but it certainly takes a more adventurous approach. It’s called Pleiades and it is located in the Moab area of central Utah. During the summertime, it is a popular canyoneering route that follows a large waterfall out of a slot canyon. During the winter the water can freeze making it climbable. You can rappel in by following the canyoneering route, and then you get to climb out. The canyoneering grade is 3C II and there is currently no public info about any ice climbing grade. This route took a little digging to find but it certainly looks like a serious adventure. It could be a route that is meant to stay as word of mouth, but there is some information found online. Also in the Moab area, there are rumors of ice climbing located in the La Sal mountains, but no data can be found about such things. It wouldn’t be surprising if a treasure chest of ice climbs was discovered in the La Sals due to the amount of snow and low temperatures during the winter.

Another popular area in the deserts of central Utah that’s worth mentioning is Joe’s Valley. As a popular bouldering spot, people from Salt Lake are used to making a day trip to climb there. On a weekend, you could crush all the ice routes in Joe’s. There is a total of seven climbs ranging from WI2 to WI5 PG13. Surely there are some classic ice routes in the boulder heavens.