My First Time: The Pleasure and Pain of Hiking Donut Falls 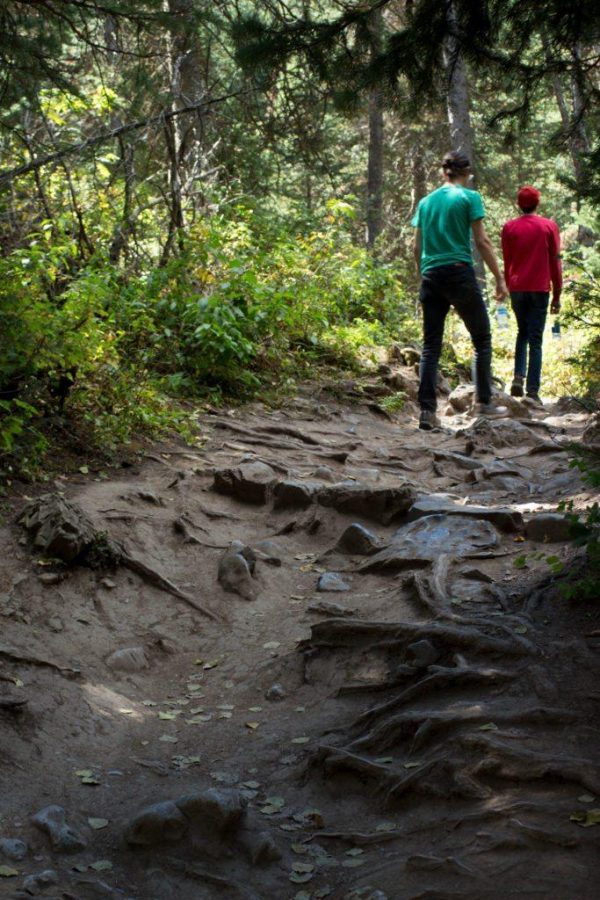 I just don’t do it. I’ve lived in Utah my entire life, and climbing in, up, and around mountains has always seemed entirely uninviting to me. Nothing appeals to me about taking up precious time I could have spent on level ground by being covered in dirt, slipping on rocks, and ending with a sore body.

I don’t like hiking, and the pros have never outweighed the cons enough for me to reconsider. So when I learned about the theme of this month’s issue ofWasatch, I wasn’t particularly pleased.

Being an avid non-hiker for my entire life provided me with a perfect opportunity to write. Anything I did would be an adventure. I was assigned to hike a popular Utah trail, Donut Falls, and I immediately got to researching.

Everything I came across said it was short and easy — which was exactly what I was hoping for. There was also a slim-to-none chance of me injuring myself. Perfect. I would climb up some dirt, take a few pictures, dust off my pants, and get right back to my air-conditioned apartment.

For my crewmates, I brought two good friends — Keith and Monty — both of whom are also fairly amateur when it comes to the great outdoors. Keith grew up in the Midwest and was naturally excited to spend some time in the mountains. Monty spent most of his adolescence in the area but doesn’t have a ton of experience hiking it. Sure, we didn’t have anyone who could save us if we got lost in the woods, but the excursion was so simple that I could’ve easily taken it by myself — Keith and Monty just made for great company.

After a drive that felt unnecessarily long, we pulled into the parking lot, I grabbed my camera, and we got ready to hike.

It was a beautiful day. Very few people were at the usually swarming trailhead, and as we started walking the temperature cooled down a little. As we got to the halfway point, it was slightly overcast with a cool breeze and no one else in sight. I couldn’t have asked for more bearable conditions in which to practice my least favorite outdoor hobby.

Even I, hater-of-anything-involving-movement, was shocked by how easy this hike was. Aside from a few moments where the trail thinned or became a little bit more slippery, we didn’t even have to focus too much on how we were getting around. Maybe it’s just because of the novice-nature of the trail, but I started to understand a little about why people might hike for fun.

Every turn of the trail provided a new and beautiful view, which was something I particularly enjoyed, especially with my camera in tow. There were sprawling fields, towering peaks, and peaceful waters. I was so distracted by the beauty of it all that I forgot about the sight that would be awaiting me at the end.

Donut Falls, for those who don’t know, got its name because the waterfall at the end of the trail goes through a perfectly rounded hole in the rock. A donut!

The last stretch we had to get past before we would be as close to the waterfall as possible was the river that it spills into. Had I brought waterproof shoes, it would’ve been an easy task, but my broken-in, old tennis shoes weren’t quite up to it, which led to a miniature disaster as I tried to get across without dropping my camera in the water. After a few minutes of very calculated steps, I finally made it and reveled in the beautiful sight of the falls themselves.

I didn’t know much about what to expect on this hike, but the one thing I did hear over and over again was to not climb the rocks near the waterfall. Every website, every testimonial told me not to go near them. And by the time we reached the falls, I was already getting a tired of hiking, so staying on the safe side was 100 percent fine with me.

In lieu of putting our lives in danger, Keith, Monty, and I instead decided to climb up the trail that goes off to the side of the waterfall. This was the point in the day that I finally started to feel whatever it is that hikers feel that keeps them coming back for more. I sat with Keith on a rock halfway up the little ledge we climbed, and we talked about our experiences from the day.

As we prepped to head back to the car, Monty, who was ahead of us, warned that the trail heading down was more slippery than it looked. I laughed it off, got ready to man-handle some rocks, and put the lens cap on my camera (just in case). And then I slipped.

Both Keith and Monty agreed that it was almost cartoonish — I was only a few feet away from the ground when it happened, but was just unfortunate enough to hit what seemed like a never-ending patch of slippery dirt. After a few seconds of sliding and flailing my arms around, I fell on my butt right before I would’ve gone into the river.

“Take a picture of this,” I said. “This happens every time I go outside.”