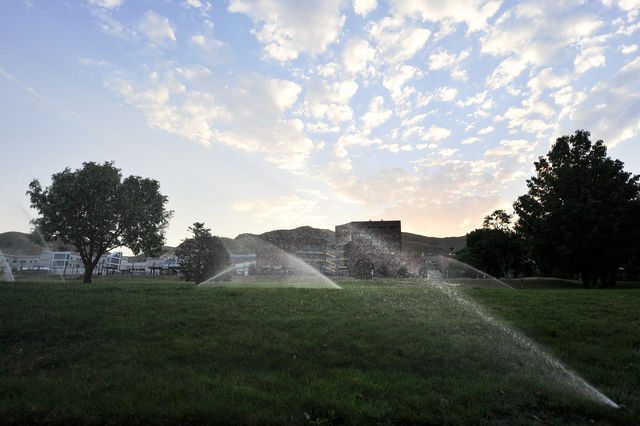 Walking along the winding avenues and seemingly endless parallels of Salt Lake City during the summer months is cathartic, and even blissful for the appreciative observer. Sprawling gardens and lawns come to life in technicolor splendor as careless homeowners and local businesses nurture their holdings in spite of the oppressive heat; the desert is in full bloom. Radiance however, comes at a price.

A bidecadal study conducted by the United States Geological Survey indicates that the average Utahn uses 248 gallons of water each day, a disheartening statistic comparatively greater than any other state in the nation. In 2010, Salt Lake County alone consumed over 300 million gallons of water per day. Currently, Utah is the single largest water waster in the U.S.

More alarming yet are the mounting projections that Utah’s population is to double by 2050—with an additional 2.5 million people to the 2.9 million currently inhabiting the high desert state. Our rate of consumption at present is hardly sustainable; how is the state to compensate for this unprecedented growth?

The rising global temperature — despite what many proponents of ignorance would have you believe — is undeniable. These increases are resulting in a dramatic reduction in mountain snowpack levels, particularly in western states. EPA researchers noted “large and consistent decreases observed throughout the western United States… the average change across all sites [amounting] to about a 23 percent decline”. Inhabitants of the Wasatch Front are heavily reliant upon snowpack as a source of drinking water and serve to suffer most as these levels continue to diminish.

Local conservationists and lawmakers are well aware of the uncertain future of Utah’s water sources and recognize the looming potential of a mega-draught similar to that currently ensuing in California. Multiple questionable initiatives have been proposed, from the halfhearted “Prepare60” that intends to address the problem by developing Utah’s water delivery systems and infrastructure, to more radical approaches that involve actions like drilling into our state’s groundwater or diverting resources from Lake Powell. Yes, these initiatives are just as environmentally irresponsible as they sound.

It is becoming increasingly apparent that with increasing global temperatures, booming population growth, and decreasing snowpack levels that action needs to be taken to preserve Utah’s status as an inhabitable chunk of desert, though the responsible course of action may not be appealing to many. Rather than looking towards new sources to compensate for our superfluous water usage, we should focus primarily on preserving the water we already have as its perceived abundance diminishes with catastrophic climate change and rising consumption.

So, where to begin? Here are just a few ideas:

· Water-pricing based upon individual use to discourage wasteful practices.

· Tax rebates for businesses and homes that use environmentally friendly appliances and methods.

· Transition to regionally-adapted plants that are known to use less water.

· Regulation of the agricultural industry’s excessive water use.

It is understandable that Utahns derive a great degree of pride from maintaining beautiful yards and lush ornamental features in such a dry, inhospitable climate, but if our state is to remain an inhabitable place, the state’s population as a whole must reduce its overall water usage dramatically.