Outdoor Advocacy 101— From Recreation to Activism 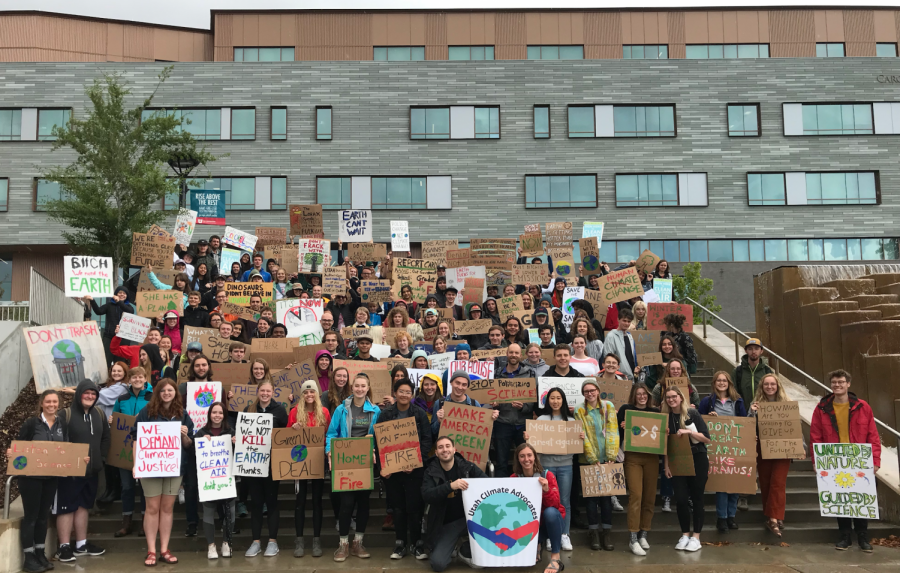 When it comes to environmental wellbeing, the state of affairs is pretty grim. Over the past four years, many have watched in dismay as almost 100 environmental regulations have been reversed or rolled back. Limits on carbon emissions have been reduced, air and water pollution rules have been weakened and wildlife protections have been stripped in favor of oil and gas drilling projects. In Utah, Bears Ears National Monument was shrunk by 85% while Grand Staircase Escalante National Monument was reduced by half — these lands were stripped of important ecological and cultural protections. Meanwhile, September 2020 was the hottest September on record, and we continue to creep toward the 2030 deadline after which anthropogenic climate change could become irreversible.

As lovers of outdoor recreation, it is important to incorporate environmental stewardship into our lives. The land takes care of us, offering opportunities for adventure, personal growth and fulfillment and profound connections. For many, the land is a source of life itself. We must, in turn, step up to take care of the land and those who rely on sound environmental policy for their joy, health and livelihoods. Yet in the face of compounding crises, it’s easy to feel helpless or overwhelmed. As outdoor enthusiasts, how can we turn a love of outdoor spaces into meaningful advocacy for them?

Piper Christian is a third-year student at the University of Utah who has done just that, proving that age and expertise needn’t be barriers to engaging in activism. Christian became aware of environmental stressors at a young age while growing up in Logan, Utah. “Logan has been ranked among the top ten worst cities in the country for short-term air pollution, just like Salt Lake,” she said. “So my introduction [to environmental advocacy] was being in elementary school and not being able to go outside for recess because the pollution outside was so toxic.”

In 2015, Christian received a unique opportunity to travel to the Paris Climate Accords, also referred to as COP21. This opportunity proved to be a transformative experience as Christian met environmental activists of all ages from all over the world and heard their stories. “I met a lot of young people who were mobilizing to do climate action and environmental protection in their communities, and it really inspired me to think about how I could get involved back in Utah,” she said.

In the five years since then, Christian has been a force for climate advocacy in the state of Utah. In 2018, she and fellow students at Logan High School worked to pass a climate change resolution through the Utah State Legislature. Christian led an effort of over 250 students that, through extensive political engagement and lobbying, was instrumental in the passing of the House Concurrent Resolution on Environmental and Economic Stewardship. “It was the first resolution, as far as we know, to recognize climate change that was passed through a majority Republican state legislature,” Christian said.

After this huge victory, Christian carried this momentum with her to the University of Utah, where she founded the Utah Climate Advocates club. As a leader of this group, she helped organize the university’s involvement in the 2019 global climate strike. Over 100 students participated in creating signs before joining the crowd of over 2,000 people marching to the Utah State Capitol Building to protest for climate action. The club has also sent students to Washington, D.C. to lobby Congress members in favor of the Energy Innovation and Carbon Dividend Act.

By now, Christian has a wealth of experience with environmental advocacy of all shapes and sizes. When asked if there was any “best” way to be an activist, she said, “Climate change and climate justice are so far-reaching and impact so many different things that I think it’s really hard to identify a silver bullet solution. There are so many different ways to get involved.” The key, then, isn’t what kind of advocacy is best, but what kind is best for you. “What makes any kind of environmental initiative successful is trying to tailor your participation to your interests and skills,” Christian said. Not everyone is an all-around activist, and that’s okay. That being said, here are some ways you can advocate for climate action, public land protections or really anything you feel passionate about. 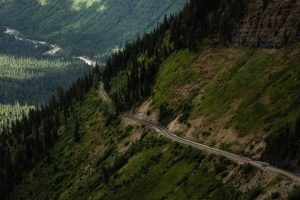 Obviously, the onset of the COVID-19 pandemic has changed the dynamic of protests for any cause. If attending a protest while wearing a mask is not something you are comfortable with, that’s okay. However, when it is safe to hit the streets again, protests are a powerful way to demonstrate public support for an issue. The September 2019 global climate strike, in which many students took the day off school to express concern over their futures, was the largest climate protest in history with an estimated 6 to 8 million participants worldwide. Such events have been proven to increase public support and signal to policymakers that there is a widespread desire for action amongst their constituents. While currently on pause due to the pandemic, Fridays for Future Utah typically organizes small-scale, weekly climate strikes at the state capitol. Stay on the lookout for events through social media or organize your own.

Writing an opinion piece or letter to the editor is a great way to engage in advocacy from home, and this form of activism has been a favorite of Christian’s since the pandemic began. “Not being able to participate in marches or things like that to the same extent that I used to, I’ve gotten really into writing op-eds,” she said. “It’s a really great way to spread awareness about an issue to a really large audience in a pretty easy way.” Letters to the editor are typically around 300 words, while op-eds can range from 400 to 1,800 words. At the Salt Lake Tribune, the maximum for op-eds is 600 words. You can easily submit letters to the editor and op-eds online, making this type of activism the most accessible. It is also the most versatile, as op-eds can cover any type of environmental issue, big or small. Climate change and environmental degradation are global problems with local solutions. Therefore, op-eds in local newspapers that highlight issues relevant to a specific area can have a great impact within a particular community.

While it sounds the most intimidating, contacting your legislators is one of the most effective forms of political engagement. These are the people ultimately making the decisions regarding environmental protections and constituent input has a serious weight on how they vote. Piper Christian’s involvement with the 2018 House Concurrent Resolution is only one of many success stories.

There are many different ways to express your opinions to policymakers. Resistbot is a common service that allows users to send pre-composed messages regarding a specific subject to their elected officials. While this type of automated messaging is a great way to make advocacy accessible through a quick and easy process, deeper forms of engagement are often more effective. Writing your own email can add a personal touch to messaging campaigns and may increase the chances of a more personalized response.

The offices of legislators keep track of how many emails they receive on a given issue as a way to measure public opinion. However, staffers suggest that calling the office may be more effective than a written message. For those averse to phone calls, this type of interaction can be scary. However, speaking to a real human about an issue is often more impactful for elected officials and their staffers, and your message may be more memorable. It can also be more rewarding for you, the activist, to have real engagement with someone about an issue you are passionate about. Before you call, it can be helpful to prepare a script in order to synthesize your ideas and calm your nerves. In safer times, it might even be possible to meet and discuss with your legislators in person.

At the state level, Christian recommends a specific process when advocating for particular bills and policies. The Utah state legislative session typically spans January through March, creating a window of opportunity for public input before legislators vote. Organizations such as the Sierra Club and HEAL Utah track all environmental legislation during the legislative session and present it in an accessible way through their websites or mailing lists. “That’s a really great way to get looped in on what issues are going on,” Christian said. From there, you can track specific bills and check government websites to find out who sits on the committees presiding over the bill of interest. Christian then recommends making phone calls to these committee members and urging them to support or oppose the legislation. “Sometimes you’re the only one contacting them about that bill, so it really does make a difference,” she said. 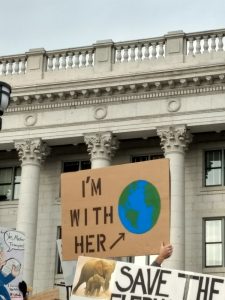 As with most movements, environmental advocacy finds strength in numbers. By working as groups, activists are able to widen the scope of the message while also creating valuable support systems. Christian emphasizes the need for these relationships in meaningful advocacy work. “That sense of community is really what keeps me coming back to the work,” she said. “I think if it wasn’t there, I would get burnt out way more frequently.” Find people who inspire you, find people who guide you and foster an environment in which you can learn from each other.

If you don’t already have a group of inspiring friends doing advocacy work, fear not. Plenty of organizations are mobilizing folks around environmental issues and offer opportunities for engagement. At the University of Utah, Utah Climate Advocates teaches students about political engagement and is heavily focused on local-level environmental justice projects. For non-students, Citizens Climate Lobby has almost 600 chapters all over the world, with 5 based in Utah. Protect Our Winters is another organization specifically focused on mobilizing outdoor recreation lovers to protect the places and lifestyles they love from climate change. Members can participate in lobby training and receive guidance for several environmental initiatives. For whatever environmental work you’re passionate about, there’s no need to do it alone.

While it can be daunting to fight for change in the face of a long list of environmental grievances, advocacy is possible on many scales and through many avenues. Doing something, anything is vital to securing the wellbeing of the lands we love – and those who rely on these landscapes for life – well into the future. And as we draw inspiration from Piper Christian, she draws her own inspiration from the masses of other young activists who are fighting for our planet. “That’s what gives me hope,” she said. “We’re really not sitting on the bench, we’re getting engaged, and that’s exciting.”