Past the Point of Snow Return? 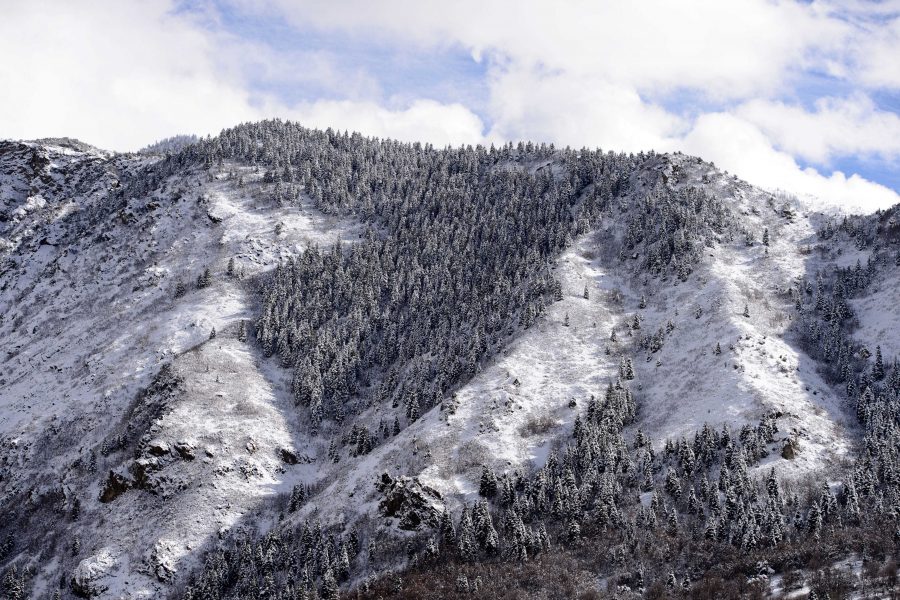 INTRO: The state with the Greatest Snow on Earth seems to be in danger of losing its winters. Increasing global temperatures have lead to lower average snowfalls, and dust from pollution contributes to the faster melting rate of the snow that remains. Experts like University of Utah professor Jim Steenburgh clear up questions about what exactly the future of snow in Utah looks like.

Ski is to Utah, as Alta is to powder. Or Snowbird. Or Deer Valley. Or Solitude. Or Brighton. You get the idea. Fourteen major ski resorts in the state of Utah seem to give the bold claim, “The Greatest Snow on Earth” some authority. The ski industry raked in $1.43 billion dollars for the Utah state economy during the 2016-17 ski season, which is up 22% from the 2014-15 seasonal income (Leaver). This economic growth contrasts the decline in average snowfall Utah has experienced in the past ten years. According to USclimatedata.com, in 1998, Utah saw 458 inches of annual snowfall, but in 2017-2018 only 288 inches. How can an industry that relies on snow be economically thriving, but have a snowfall that’s on average decreasing? The obvious answer seems to be global warming resulting in warmer winters, but I needed to sit down with an expert to confirm this theory.

Jim Steenburgh is a professor of Atmospheric Sciences at the University of Utah and author of Secrets of the Greatest Snow on Earth. His work is frequently referenced when defending the superiority of Utah snow, and as a three sport skier Steenburgh is well versed on the subject.

On the surface it seems like lighter, drier snow would be ideal for powder skiing. You have a different theory, could you explain?

Steenburgh: “Utah doesn’t have the driest snow in the world, and that’s been proven. Most of Colorado gets drier snow on average than we do. The question is why don’t people go to Colorado for deep powder skiing? Alta was the birthplace of deep-powder skiing really anywhere on the planet, and the reason is we get a lot more snow than they do. If you want to ski deep powder two factors have to line up; you have to get big snow storms, and you have to get a lot of them.

That is one of the advantages of our climate here. The other thing is that it’s not all about how dry the snow is. Storms that produce dry snow do not produce the best floatation, which is a term associated with excellent powder skiing.  It’s actually the storms that start out with high density snow, and decrease in water density as the season progresses, so that the light snow is stacked on top of some higher density snow… That’s really what you want for optimal ski floatation, and we get a lot of those storms here.”

What is the best season that Utah has on record in terms of average snowfall?

Steenburgh: “I think 2010-2011 was the best ski season that I have seen since moving to Utah, we got a ton of snow, it came pretty regularly, a pretty outstanding season in most respects. If you want to look at seasons that were really good I would look at the late 1980’s early 1990s. The average snowfall during that period has been higher than it has been in the last 15 years. I usually tell young people like yourself that your parents had it better (chuckles).”

What are the factors that might contribute to worse snowpack in the future?

Steenburgh: “Warmer winters due to global warming. Global warming has to do with different gasses that we are emitting, and it’s not just carbon dioxide but methane and nitrous oxide. These all are being produced by humans, and are accumulating in the atmosphere, causing the planet to warm. The warming accounts for the decline in sea ice especially in the Poles, and rise in sea levels and so on… first stage of this feedback loop we are seeing is the earth is warming a little bit from the greenhouse gases, losing progressively more polar ice especially in the summer months, then you have more water exposed that absorbs more radiation, so that helps warm the planet as well, a sort of positive feedback process. The other thing that affect snow and ice are dust and ‘black carbon’ (black carbon is a byproduct of combustion), which gets into the snow and causes the snow to become a little darker. The snow is then able to absorb more heat because darker colors absorb more light, and thus the snow melts at a faster rate.” 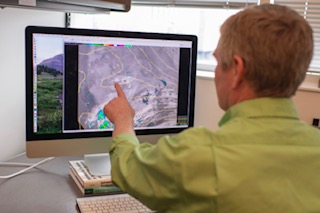 This is relevant because the law of conservation of energy governs the way our world works. Heat is a form of energy. Heat is produced through burning and combustion, but we associate these things with destruction. How can this be true if energy is never destroyed? This association is formed because burning and combustion transforms the energy of something tangible like, wood, into something invisible like carbon dioxide gas. The Earth transforms this carbon at different steps called the Carbon Cycle. Increasing amounts of carbon in one step forces carbon to trickle into the next step, and thus pushes the cycle forward. Herein lies the problem of global warming and increased emissions. Burning fossil fuels is skipping multiple steps in the carbon cycle, and increases carbon in the atmospheric step at an exponential rate.

Skipping multiple steps in the carbon cycle is like turning on a faucet above an already- full sink, and expecting it to drain before it spills over. Now this wouldn’t be a problem if we slowed down or stopped emissions every once in a while, allowing the Earth to ‘catch up’ with the increase in atmospheric carbon. Historically, humans have not done let the Earth catch up. We have turned on the faucet of fossil fuels and carbon emissions since the Industrial Revolution, and demand for fossil fuel energy has only grown exponentially along with human population. It has taken decades for us to see negative changes in our environment that indicate our sink is spilling over with carbon. What can be done to drain the sink? Are we past the point of no repair?

Protect our Winters (POW) is a non-profit organization that has taken up the charge of healing our planet. Founded by snowboarder Jeremy Jones, their mission is, “[turning] passionate outdoor people into effective climate advocates. POW leads a community of athletes, thought pioneers, and forward-thinking business leaders to affect systemic political solutions to climate change.” In February of 2018 REI Co-Op and POW held a conference, “The Economic Contributions of Winter Sports in a Changing Climate” that explored topics from the economic value of winter sports, case studies of how tourism is being affected by weather, to surveying recent climate studies and making sure people are informed of new findings. The Sierra-at-Tahoe case study was particularly interesting. They had experienced 5 years of drought, but experienced aggressive  January storms that shut off power, shut down freeways, and trapped people in their houses. As weather patterns become increasingly more irregular, doubts of the existence of global warming can no longer be pushed to the back of the mind. We see the changes, now what can be done to restore the balance? 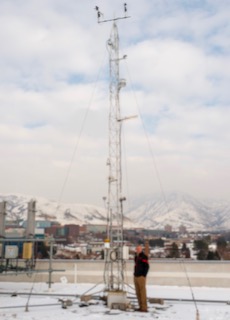 POW serves as a guide and resource for the individual by offering avenues of research, and local advocacy to people to form their own opinion about climate change. POW is “A social movement on climate, designed to activate a passionate community and create the political will for meaningful action by state and federal policymakers”. POW recognizes that the responsibility of change lies entirely on human shoulders, and stirs the individual into action by offering a ‘Climate Activist Roadmap’ to show the most effective route for each situation. Numerous climate organizations like POW have accepted that failure to cut emissions, or change our energy sources, will lead to uninhabitable conditions for humans on Earth.

Is it really possible for the Ozone to repair itself? The United Nations panel of scientists released a statement in November regarding the ozone showing signs of repair.

Steenburgh: “When these CFC’s (chlorofluorocarbons) get up into the atmosphere they create conditions that cause the ozone to be depleted, especially in the South Pole area. Those chemicals were banned in 1996 or they have been heavily restricted in production. That drop in CFC emissions lead to a gradual drop in CFC concentration in the atmosphere and as a result we are starting to see higher levels of ozone in the Polar regions, so it is a big victory. I don’t like to say for the environment, but for humans.”

The takeaway here is that the challenge to climate change is time. The time it takes for us to burn up carbon is growing exponentially, and is happening at a faster rate than Earth’s carbon “sink” drains into the next step. It takes thousands of years for the Carbon Cycle to turnover the same molecule of carbon, but seconds to plug in a computer to charge zapping up 48 Watts. Time also sabotages our ability to see the severity of environmental changes, lessening the urgency to drastically change our energy needs within our minds. The inability to see an immediate change from eco-friendly efforts is discouraging, and pushes the consequences of doing nothing far from our minds as we reason that results must be decades down the road. However, the Winter Sports Industry cannot afford to do nothing about climate change as winters are being acutely affected by the warming of our atmosphere, and therefore have produced organizations that are the most proactive and vocal about the subject. What lies ahead for this sport? That depends on the future of winters. Only humans can control, and time is omniscient.

Haley Halberg is an undergraduate Biology major at the University of Utah. She believes that transparency is the key to restoring public faith in scientific inquiry. She enjoys skiing, mountain biking, and being with her Malamute-Husky outdoors.