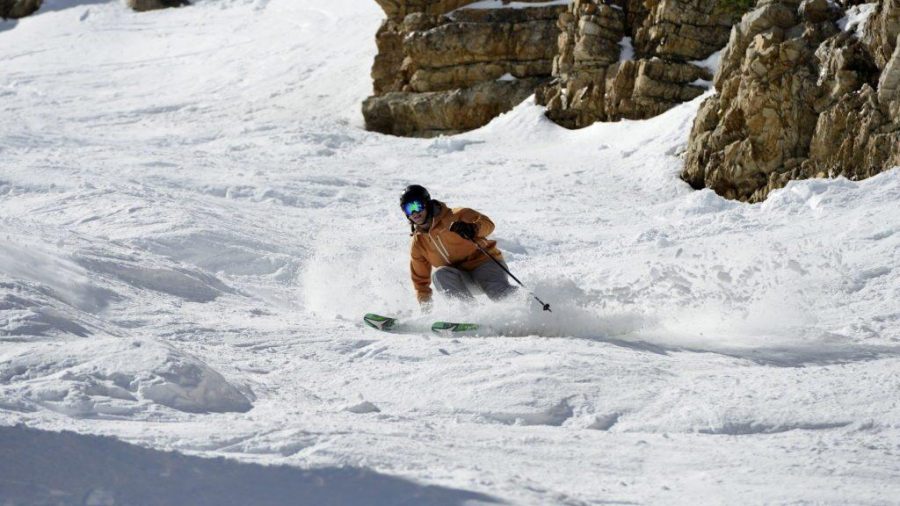 Skiing up at Snowbird and doing the Baldy Chutes

So far this year, the typically inclement month of November has been destitute and dry, leaving Utah skiers with unusually barren mountains obscured by haze and a lingering question: where — or when — is the snow?

To adequately prepare for immediate immersion into fresh powder, and possibly to seize an early-bird discount, many locals secure season passes as early as possible — but without optimal snowpack, is it worth the lofty expense? To convert speculation to inference, we consulted the experts to determine how this uncertain season is likely to fare and what it means for prospective season pass holders.

So, about the snowpack…

Shedding some light upon the dishearteningly barren slopes, amateur meteorologist Evan Thayer from Wasatch Snow Forecast observes, “We are certainly off to a late start.  In fact, there have been very few occasions when we were this deep into Fall without any sort of permanent snowpack. So, that means that once the snow does start falling, we’ll have some catching up to do.”

Luckily, Thayer predicts that the canyons will begin to develop a permanent base snowpack around Nov. 17 – 18, leaving only a 10 percent deficit of snow.

Reflecting the utter unpredictability of our state’s weather, the real difficulty lies in determining just how much snowfall is to come. In Thayer’s words, “Utah does not [usually] correlate to many of the typical oceanic and atmospheric indicators such as El Niño or La Niña, so even in a strong event of one of those, it is difficult to make any sort of snowfall predictions.”

This year is particularly problematic since we are currently in an ENSO-neutral state, meaning that, as of yet, neither an El Niño nor La Niña has incurred. Since Pacific waters have remained abnormally warm over the past five years, we could potentially face another dry year — though it’s virtually impossible to tell. “Based on what I have seen so far, we will more likely than not have a below average year since we are starting out in a deficit,” Thayer says.

Despite this potentially disconcerting news, Thayer digresses with a redeeming projection:

“Luckily, we average up to 500 inches of snow in the Wasatch, which means that even our bad years feature prodigious amounts of snowfall, and Mother Nature can turn things around in a hurry.  I would not be surprised at all if we had a very good December after this lackluster November and were back on track by New Year’s Day.  Crossing our fingers and hoping is about all anybody can do, even those of us who forecast snow for a living.”

Season Passes: to Buy or Not to Buy

Whether you enjoy traversing the backcountry or visiting Utah’s bustling resorts, basing your plans on snow projections is a dubious task. There is really no knowing how much or when the powder will fall. The best course of action is to assess your individual needs, calculate how often you intend to hit the slopes, and decide how much disposable income you’re prepared to devote to the sport.

Paul Marshall, Director of Communications for Ski Utah, offers some helpful tips for U students considering taking to the resorts: “As locals, we should all take advantage of early season pass pricing, affordable learning/teaching programs, especially during the month of January, and accessible bus routes to and from the resorts.”

For those of us who are strapped for cash, Marshall says, “Getting a job at the resort is a great way to make money, ski/ride a ton, and enjoy winter in Utah to its fullest. What people might not know is that jobs at the resorts can be more than just a ski/ride instructor or lift operator.”

Let’s cross our fingers and pray for bountiful snowfall. When it comes, we’ll be ready.