Saguaros and Speedos: Recounting My Time on the AZT 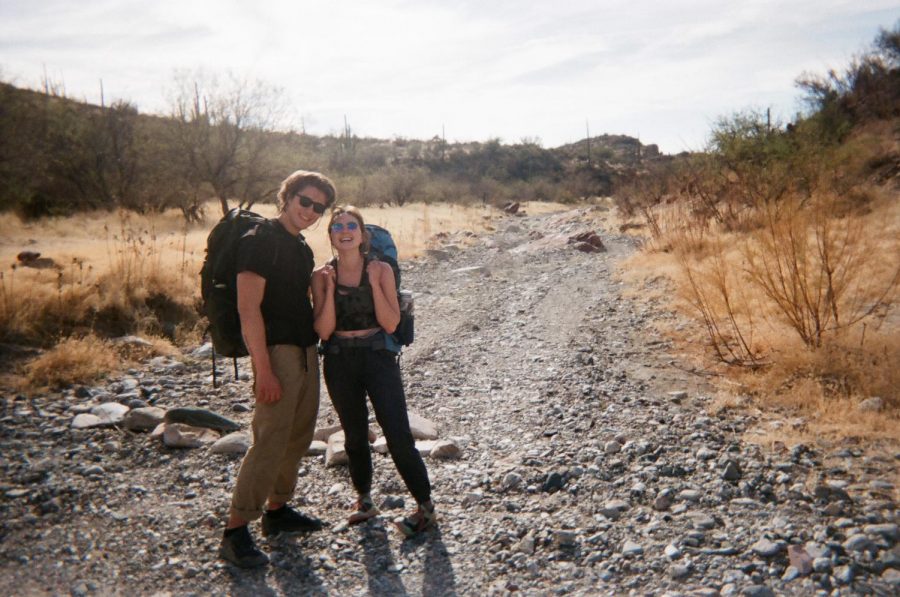 “The tent poles, and the knife, and the stove… and the cutting board!” my sister exclaimed, listing off the items she was carrying for the group. My sister was (half-jokingly) upset about the disparity between the weight of her backpack and her companion’s. We were sprawled along the trail, about 14 miles deep into passage 18 of the Arizona Trail. The lowly cutting board was an afterthought to the list of group gear she had absorbed into her pack.

This was our first time orchestrating a through-hike, meaning instead of hiking a loop or doubling back, we hiked straight from one trailhead to another over 18.4 miles of the Arizona desert. When my sister mentioned an idea to backpack somewhere south of Salt Lake over the break, I began to search for trails in Arizona and New Mexico. One of the results of this search was the Arizona Trail (AZT), which is a whopping 800 miles. It starts at the Mexican border and winds through dozens of different landscapes to reach Utah. The trail is divided into 43 passages, each of which are bookended by vehicle access points. Seeing as we had less than one week to spend on the trail, I opted for passage 18 — Reavis Canyon. It runs over ridgelines and mountains, through Reavis Canyon, underneath Highway 60 and along a riverbed.

I recruited my boyfriend, sister and friend, and we drove from Salt Lake to Florence, Arizona in one long day. The next morning, we left one car at the southern access point and drove together to the northern trailhead. “Vehicle access” seemed a little generous as we rolled over 15 or so miles of rough dirt roads. We encountered a dozen or so UTVs, many of which were proudly flying confederate flags or packing automatic weapons in their backseats. Everyone we met on the road was at least double our ages. From that trailhead, we began to hike south, back toward the other car. The trail took us up and over Montana Mountain and then disappeared. We didn’t even realize it until we had already descended some of the mountain and ran into a cattle fence. At this point, we had to backtrack and traverse through some really mean desert plants until we located our trail once again. Life in the desert seems to require that plants implement every defense mechanism possible. The plants, such as the Saguaros that must have been three times my height, were beautiful and fascinating. Unfortunately, they weren’t so friendly up close.

We found the trail again after an hour or two and continued to descend into Reavis Canyon. At the bottom, a dry riverbed full of brilliant blue stones wound through dense flora. We hoped we would come upon water to filter soon. Unlike the cacti, we are not adapted to drink water only once a month, although that would be nice for desert backpacking. We came to what was essentially a large puddle, although some may call it a cesspool, and we were able to filter the water before continuing through the ravine. Beggars can’t be choosers. We camped near the riverbed at sunset, having clocked about eight miles that afternoon. After my sister’s signature backpacking Spam Mac and Cheese, we fell into our tents to sleep.

The next morning, we awoke with the sun for instant coffee and hopped back on the trail. We ascended out of the canyon onto a desert ridgeline traverse. We passed saguaros, chollas and barrel cacti along the way. I was stunned at the diversity of landscapes we passed through in just 20 miles. A couple of hours after lunch we took a rest on the trail. My friend Daniel commented that he was growing tired and his pack was heavy, at which point my sister made sure he knew everything she was carrying for us, including but not limited to the cutting board. Moments later, Daniel pulled his speedo swimsuit from his pack, and we all collapsed, laughing at the ridiculous moment. “Where did you think you were going to swim in the desert?” we managed to ask him through gasps of laughter.

We continued hiking, and eventually, the sun began to set. We were drawing near the landmark Picketpost Mountain, where we had parked the other car. After a brief group discussion, we decided a campfire sounded too good to camp another night on the trail like we had originally planned. We booked it toward Picketpost, and it was an hour I’ll never forget. Of all the beautiful, sublime moments in my life, this sunset has to be in the top three. As we hiked, pushing our exhausted bodies to walk as fast as they could, the sinking sun gradually set the sky on fire. To the west, streaks of grey snaked through violently orange clouds, and the lavender backdrop of the sky was all around us. To the east, wispy blankets of clouds were lit up in gentle pink, silhouetting the towering saguaros. We passed under Highway 60 and reached the car just after darkness fell completely. We were able to relax by the fire that night and laugh about all we had been through on the trail.

The following day, we shuttled back to the northern access point, passing an unofficial shooting range, where a group was using Biden campaign signs as targets. Over the next few days, we made our way to the Grand Canyon and eventually Zion National Park. The rest of the trip was fun — I had never been to the Grand Canyon before, and it’s certainly worth seeing at least once, but the AZT stands unparalleled in my memory as the highlight of the week. Not only were the landscapes unlike anything I’ve experienced, but the process and concept of through-hiking is so attractive to me. The trail feels different when you’re living on it, even if it is just for two days. My boyfriend described it as being able to “feel the pulse” of a place. To experience this and to share it with the people I love is to me, the best way to pass my days. I hope to one day come back to the Arizona Trail and hike it in full. It’s baffling to think about the beauty and diversity of life and landforms and then multiply it by 40 — that’s what you’d be getting into by doing all 800 miles. In the meantime, however, our brief stint as through-hikers has given me enough memories to tide me over until the next adventure.