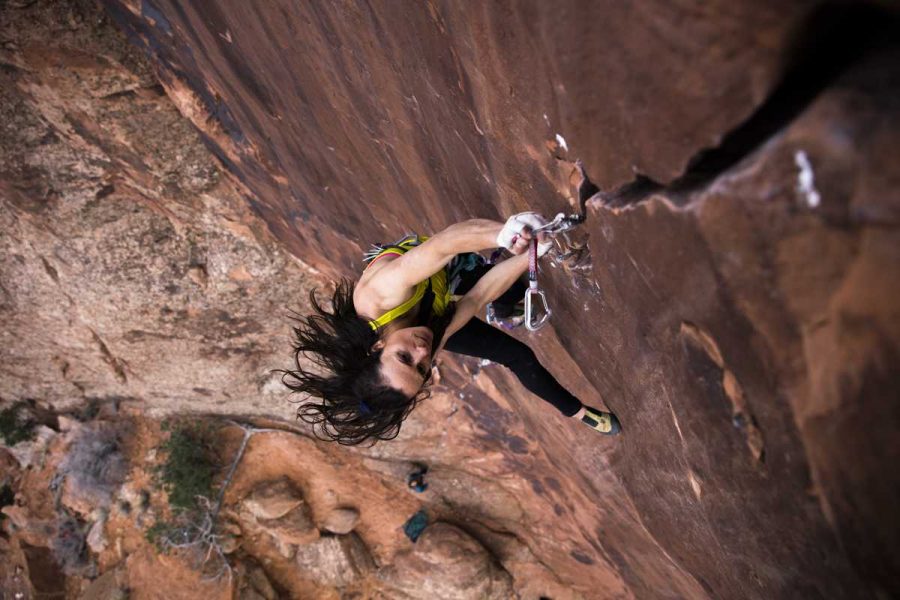 Steph Davis is a professional rock climber, free-soloer, BASE-jumper and more. She’s written the books Learning to Fly and High Infatuation. She answered six questions for Wasatch on risk and the outdoors.

1.) What is the responsibility of the National Park Service in protecting people and the environment in the parks? How should policy change to accommodate that?

SD: I think the NPS has a tough job of caring for the national parks as our

population continues to increase exponentially. Humans are very hard on

the environment, and continuous human expansion continues to create more

and more impact on natural areas, protected or otherwise, over the

entire planet. I think this is larger than NPS policy. I don’t know how

it will be resolved.

2.) Why do we associate sports like climbing with risk, when we’re all aware stepping into our car on a busy road is statistically far more dangerous?

SD: The human brain has evolved for thousands of years to respond to dangers

in the environment.  The world we live in, of cars, planes, climate-controlled living spaces, and global communication has only existed for

the last 50 years or so–and still does not exist in the lives of many.

predators, because those were the greatest threats humans had to deal

with for thousands of years. The human brain right now has a much harder

time understanding less overt dangers, like the danger of dying from

3.) What is the difference in risk you experience in an extreme outdoor adventure, versus mundane everyday risks?

SD: I think many people are attracted to adventure because risk is very

immediate–easy for our brains to understand–and as a result, awareness

of it is more clear. We have reduced a lot of immediate risk from our

everyday lives, and as a result, we’re not very good at managing it.  By

exposing yourself to risk regularly, you learn to evaluate environments

and conditions objectively, and to make decisions based on those

evaluations. This does change your perception of everyday risk taking as

well: for example, I am pretty selective about what I eat, because I see

4.) Has your perception of risk changed over time? If so, how? If not, why?

SD: Living in the outdoors has taught me to be very aware of risk and risk

management, and to weigh all potential risks equally. For example, I am

extremely cautious about driving in cars, and I consider it a pretty

5.) Do people think of these outdoor sports (climbing, mountain biking, base jumping, etc.) as dangerous or risky behaviors because it forces them to confront an aspect of their own mortality? And is it the fact it’s outside of the control we like to exert within society/urban areas, that scares people?

SD: Most unfamiliar things are scary–this is another thing the

human brain does for us, whether we like it or not.  And we are born

noises. We all have an equal opportunity to reduce those fears as we

grow, by familiarizing ourselves with them gradually and getting better

at working with them. Often people have a negative reaction toward

things they find unfamiliar and scary, and often they try to avoid

6.) Is the trend in outdoor sports towards more risk or safety? The gear is always getting better, but people like Honnold dominate much of the mainstream’s view of climbing. So, are the sports becoming more or less dangerous as gear and skill let us do things never before imagined?

SD: We’re in a really interesting time right now, where information and gear

are continuously improving.  Skills and techniques that took a lifetime

to pioneer are now available to anyone on the internet, at indoor

training centers, or through commercial courses.  Climbing is a great

example: thanks to climbing gyms, kids as young as 3 can start seriously

climbing, and a new climber generally expects to be climbing within a

ago. Climbing training is now highly advanced, when climbers used to

tunnels, and small children can learn how to freefly at a very advanced

level, years before they would even legally be permitted to go

skydiving.  There’s now an artificial surf pool where the waves are

days and fight crowds for good waves. On the internet, you can watch

level. This has completely changed the perception of what’s

possible–people are exponentially getting better and better, faster and

faster. There’s also a different perception of time. It used to be that

year, and the publicity would take some time to appear in magazines, and

would then stick around for a while. In the time of digital media, we

multiple times a day, and we then forget about them and need to see new

ones. I think the gear is safer and better than it’s ever been, but I

causing more people to be pushing more often. Pushing comes at any skill

level, because pushing just means that you’re pushing beyond your

current ability level. This can contribute to more danger, when the

sport itself is very high risk. And there is a limit of what the human

body can take: skiers can continuously jump higher and ski faster, but

there’s a level of impact that no gear can protect from.  I think we’re

adding safety, but the human factor is adding danger, and it will be

interesting to see where it goes from here.