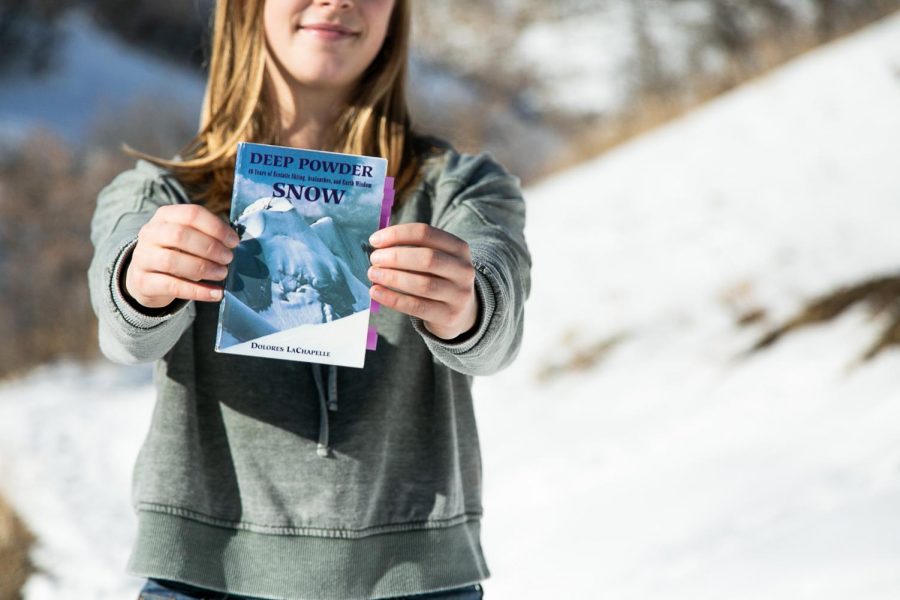 In celebration of Women’s History Month this March, let us recognize the trailblazing woman who helped lay the foundation for our beloved sport of powder skiing: Dolores LaChapelle. Her story is inextricably woven into the history of skiing and Utah’s powder culture, and her written works put into words the feeling we all crave when we ski deep, fresh snow.

Dolores LaChapelle first gave skiing a try in 1944, when she bought a pair of 7-foot wooden Army surplus skis at the tail end of World War II. After her first day skiing, hitchhiking up Loveland Pass with no prior knowledge and taking plenty of falls, she knew it was what she wanted to do for the rest of her life. After graduating college she moved to Aspen, Colorado as it was one of the few towns in the country with a ski lift. At that time, the skiing convention involved navigating narrow, unevenly packed trails, but Dolores was one of the few who understood the appeal for untracked powder. She became a core member of Aspen’s early ski community, and the only woman.

During this time she learned the “single dipsy” skiing technique, the earliest version of our powder skiing technique today, which was pioneered by Dick Durrance at Alta. She quickly mastered the style and brought powder skiing to a new level of international visibility. From 1950 to 1951, Dolores and husband Ed LaChapelle lived in Davos, Switzerland. There she became known as the “powder snow specialist” and taught the Davos ski school instructors how to ski powder, even going so far as to pose as a ski instructor for a photoshoot because none of the actual instructors could ski the line the photographer had requested.

In 1952, Dolores, Ed, and their two-week-old infant moved to Alta, where Ed helped spearhead the avalanche research program. In the early days of this ski haven, Dolores continued to grow the powder skiing community through her work as a ski instructor, film projects with Warren Miller, and regular ski excursions into the backcountry and terrain that would later become Snowbird. Dolores and her small group of powder enthusiasts skied on wide wooden skis personally made for powder by Jim Shane, who later founded the Gold Miner’s Daughter Lodge, before becoming some of the first to transition to metal skis and tech bindings. Dolores later moved to Silverton, Colorado and continued to push the boundaries of ski touring. Her flowing style, reverence of the mountains, and blissful engagement with snow was foundational to her skiing and was deeply impactful on those who skied with her.

In 2004, Dolores received the “Ski History Maker” award from the University of Utah as one of the ten most impactful women on the history of skiing. In addition to paving the way for powder skiing as we know it today, this prolific skier, climber, and mountaineer’s accomplishments include the first ski ascents of both Mount Columbia and Snow Dome in the Canadian Rockies. She also climbed all 52 of the original Colorado 14ers by the time she was 21 years old.

Yet despite all of Dolores’s contributions to the growth of powder skiing, perhaps her greatest legacy lies in her groundbreaking written works. As a scholar, Dolores was a leading thinker of the deep ecology movement, an environmental philosophy that redefines the relationship of humankind and nature with an emphasis on intimate connectivity and reciprocity of all earthly beings. This departure from anthropocentrism allows us to shift our understanding of how we fit into the world and, as explained by Dolores and others, return to our roots as symbiotic beings in tune with the sacred natural forces. Dolores spent several years studying the principles of deep ecology and supporting them through lived experience. Her books Earth Festivals (1976), Earth Wisdom (1978), and Sacred Land, Sacred Sex: Rapture of the Deep (1988) now serve as seminal texts for this philosophy and offer guidance for how to live a more meaningful life in coexistence with nature.

Written in 1993, Dolores’s book Deep Powder Snow: 40 Years of Ecstatic Skiing, Avalanches, and Earth Wisdom applies her principles of deep ecology to powder skiing, and her writing comes remarkably close to explaining that indescribable feeling of euphoria we feel when we ski deep, untracked snow. When skiing powder, our skis serve as the connection between our internal nature and the external nature. On our best runs, we often don’t make many conscious choices of where to turn; rather, the snow guides our turns for us as we exist in a type of flow state. The bliss we feel in surrendering to the natural world, according to Dolores, arises from the establishment of a relationship between human and natural forces. She writes, “we relinquish our human control and turn it over to the earth below us (the gravity) and the sky above us (the snow which that sky gives us) and our way is laid out for us so we can live validly.” The way we ski can in turn teach us a lot about how we can live our most joyful lives: similarly in relation with nature and all it entails. Dolores herself has said, “everything I know, I have learned from skiing powder.”

Too often overlooked in skiing’s history, Dolores LaChapelle gave us the groundwork for powder skiing and the words to describe why we love it so much. Deep Powder Snow now feels like a sacred text, as this work by the “godmother of powder skiing” has long been out of print and copies can be hard to come by. However, the book can be found at the Marriott Library Special Collections upon request. We have much to learn from this great mind.