The Voice(s) of Glen Canyon 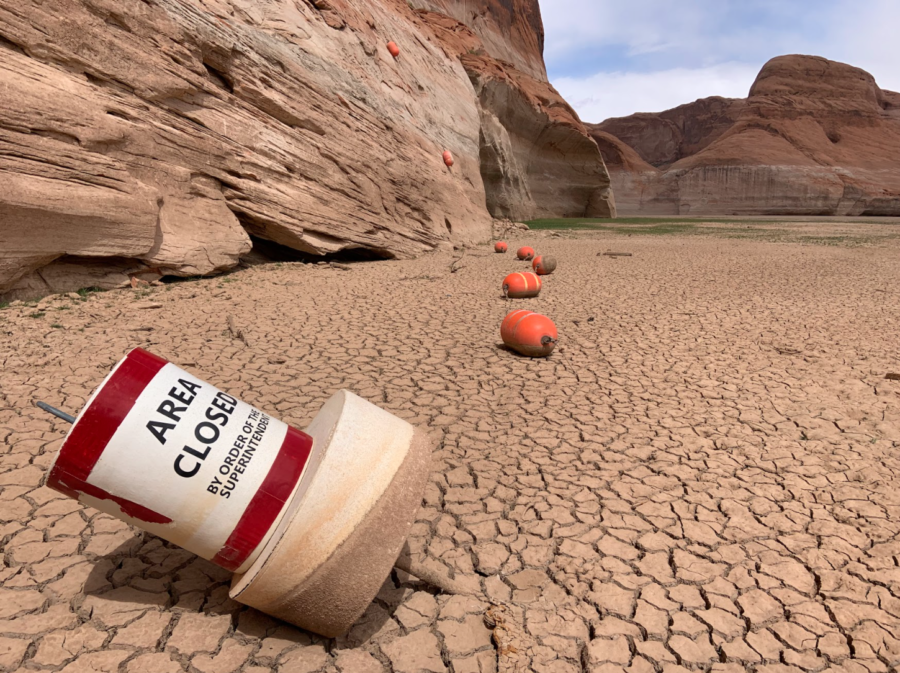 “All dams are Ugly, but the Glen Canyon Dam is sinful ugly.” In 12 words, author Edward Abbey provides an elegant summary of his view on Glen Canyon, the site of one of the most controversial reservoirs in American history. I could have cited hundreds of quotes from Abby, a notorious curmudgeon, on the subject. If not him, then one of his characters would have had plenty to say. Like many college-aged environmental types that came before me, his work The Monkey Wrench Gang fueled my desire to pursue this subject, with its Hayduke-ian philosophy that all commercialized tourism of the American desert is, well, sinful. What Hayduke and Abbey’s views have in common — besides their bitterness — is that they are remarkably unrealistic; the Glen Canyon dam will never be blown up by a houseboat filled with explosives, nor will the national parks of the southwest cease to be crowded. That’s not to say, however, that Glen Canyon will never see the light of day again. Not in the slightest. In fact, a good deal of it already has; as of this writing, Lake Powell’s water level sits at 3,544 feet above sea level. That’s roughly 30% of the capacity of the reservoir. Eco-terrorism or not, Lake Powell is draining right in front of our eyes … in slow motion.

“The construction of that dam is considered the United States’ greatest environmental mistake … it was a complete tragedy.” Those are the words of Eric Balken, the executive director of the Glen Canyon institute — an organization aimed at restoring a free-flowing Colorado River through Glen Canyon, effectively draining Lake Powell. The group was founded in 1996, at a time where their mission was far more daunting of a task than it is today. Balken himself joined the cause well after it was founded, after following a path I see myself, and many of my peers, potentially going down. He was born and raised in Utah, taking trips to Zion National Park with his family. In high school he started floating rivers, delving deeper into the magic of southern Utah, reading Edward Abbey. Studying environmental science at the University of Utah and working at The Pie, he stumbled across the man in charge of the Glen Canyon Institute at the time, a professor who came into his shop to pick up some pizzas for his class. Realizing they had a shared interest, the professor invited Balken to come work for him — he quit serving pizza soon after. 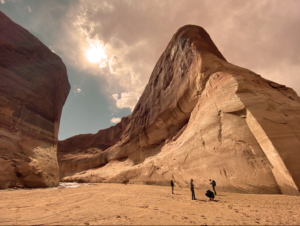 As romantic as it sounds, the main goal of the Glen Canyon Institute (GCI) is not to destroy the Glen Canyon Dam in a heroic display of eco-terrorism. Instead, they aim to conduct and facilitate research, using the results to advocate for a free-flowing Colorado River. According to Balken, the dam itself was constructed at a time where its environmental impact was not considered. There was no agency or legislation to protect the environment, thus no research into the impact of the dam was done. The GCI now does the research that wasn’t done then, hoping to “bring together really smart people and see if there is an argument to be made in restoring Glen Canyon.” The organization doesn’t even want to see the dam get torn down. In fact, their ideal scenario involves keeping the dam standing, drilling new bypass tunnels around it so the water could flow without interruption. In this scenario, Lake Powell would stay empty, waiting as a backup reservoir in the unlikely case that it’s needed once again. The water stored in it would get moved downstream (Lake Mead is also at a historically low water level right now) and Glen Canyon would be freed.

This scenario is not as far away from reality as it may seem. If the water level of Lake Powell continues to drop, the dam would be unable to generate hydropower; it only needs to sink another 50 or so feet to reach this point. At levels that low, the reservoir would struggle to support the crowds of houseboaters that seek it out every weekend, and the water would reach a point of “dead pool,” where the amount of water flowing out is the same amount of water that flows in. This would mean that water could not be pulled from the reservoir for agricultural, commercial, or residential purposes. All of this would render Lake Powell largely obsolete, if not dangerous — dead pool levels would mean that the reservoir’s depth could fluctuate 100 feet or more with spring runoff, a rate that could pose a danger to both tourists and wilderness workers. This is a reality that is not too far away, and one where the argument of drilling new bypass tunnels around the dam becomes very realistic.

Going into this, I was under the impression that the GCI’s goals were fueled largely by nostalgia, to realize some notion that the canyon deserves to return to its 1950s glory. To some extent, this is true — before the dam, Glen Canyon was one of the greatest river running destinations in the country, if not the world. With dozens of side canyons to explore, it was the dream of every adventurer to experience it. The motivations of the GCI go far deeper than this. Balken made sure to outline that sentiment, saying, “I don’t wanna give the impression that we think our style of recreation is entitled to something that other people aren’t.” River runners and houseboaters both have an equal right to enjoy their activities. However, according to Balken, “the reality is that this change is way beyond any user group or any public interest.” 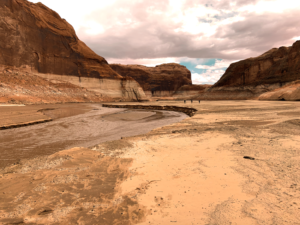 Along with those river running dreams, a vast ecosystem was drowned with the construction of the dam, impacting the local environment in a way that it had no right to do. With the recent sustained low water levels, some of that ecosystem has begun to be reborn right before our eyes, in a remarkable way. The best way to comprehend this, according to Balken, is to go there; “it’s hard to describe over the phone.” Regardless, over the phone, he painted for me a picture of what these areas look like today. “When you get to a side canyon, park your boat in this muddy delta, you step out and it’s sorta void of life, just mud and rocks. It smells like methane, like rotting mud. Then you start to walk up the canyon and start to see little plants pop up, walk a little further and you start to see more plants, bigger plants, dragonflies and bees and wildflowers. The further you get up, the harder to imagine that a reservoir was even there.” This is the process of restoration, or ecological succession — the process of life coming back. The same one that happens after a large wildfire or flood, but on a scale that is largely unprecedented. It’s going on right now, as you’re reading this, in those areas of Lake Powell that are no longer under the surface. Beyond the re-emergence of life, this process involves the washing out of sediment deposits — something accomplished over time with the help of flash floods — and washing away of the “bathtub ring” that marked the once highpoint of the reservoir. Through the GCI’s studies, Balken claims that “it’s fairly safe to say that a lot of side canyons will get back to where they were before. That is, back to their 1950s glory.”

But what about those houseboaters? What about the 2,000,000+ visitors that spend weekends and holidays floating in the slowly draining waters? Well, they’re gonna have to adapt either way. “I think people are starting to see the writing on the wall,” Balken tells me, “Lake Powell is gonna go away regardless of what people want.” The tourism industry — along with the infrastructure that accompanies it — is not going to disappear in the area, just change. “It’s going to become more like a national park style recreation economy … it’ll look something like Canyonlands, where you have river recreation and hiking recreation.” In addition to this, the fact that Glen Canyon would become the largest river restoration site in the world would surely drive-in tourists by the busload. People just aren’t going to be houseboating there anymore.

All of this is not to say that Lake Powell isn’t remarkable itself. “If I didn’t know the story of Glen Canyon and the story of what was lost, I would think it was cool too,” Balken remarks. And it is cool. It’s one of the most scenic reservoirs in the world, solely because it sank one of the most scenic canyons in the world. Its appeal as a tourist attraction and its importance to the state of Utah cannot be overstated. Nevertheless, it seems to have largely run its course (no pun intended) as it drifts into obsolescence. If it continues to drop in water level — and many indicators say that it will — it will not even be able to serve the purposes it was built for, becoming instead a largely unusable pond of dead water. Balken and the Glen Canyon Institute hope to prove that the process of reclaiming the land this pond sits in should be helped along in every way possible. Already, nearly 100,000 acres of land that was once submerged is now free to explore, along with roughly 40 miles of free-flowing river that was once stagnant water. “This is one of the rare instances that we have a habitat coming back,” says Balken. It’s a very positive occurrence, one that should be viewed with optimism for the future of Glen Canyon rather than mourning the loss of Lake Powell. The GCI simply gives an avenue for that optimism to be productive, questioning the viability of maintaining the reservoir. “Without an interest group like us, a voice for Glen Canyon, these questions wouldn’t get answered.” That voice needs to be heard, and hopefully, through the work of the GCI and others, it will. 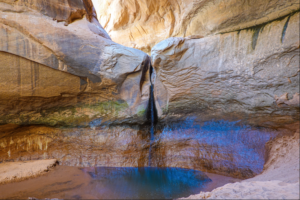