Last spring, many thru-hikers were preparing to begin their two to three thousand-mile journeys along one of the major mountain spines of the lower 48. When COVID-19 restrictions were put in place, many hikers made the hard decision to cancel their trek.  When on the trail for many months, hitchhiking and spending time in towns are vital to keeping a thru-hiker happy and healthy. Clinton Alden, a second-year student at the University of Utah, decided that he could do a shorter thru-hike safely, with some sacrifices.

On June 28, Alden and two of his friends met up in Denver to start a thru-hike of the Colorado Trail. They finished on July 24, totaling 26 days of hiking. The Colorado Trail winds 487 miles from Denver to Durango, crossing through six national forests, six wilderness areas and eight mountain ranges. Early in their hike, they began to notice other thru-hikers behaving as if it were a normal year. They didn’t see many masks, and everyone seemed to be hitchhiking. “I was not interested in that — it seemed like an unnecessary risk,” Alden said. His group had a plan in place that would remove the need for hitchhiking or spending time in town. One member of the group was from Denver, and his family was able to meet them at three spots along the trail for resupplies. If they maintained their planned mileage, these resupplies would allow them to complete the trail without hitchhiking into any towns.

Even with this plan in place, the group still had to swallow some risks in the process. Alden was coming from San Diego and had to take a plane to Denver. Alden was shocked to be around people after he had become accustomed to the restrictions in San Diego.  “We hadn’t seen anybody outside of our family indoors in months.  The first time I went out to get food at a restaurant was at the end of the trip, and I was even uncomfortable with that,” he said. Another consideration was that if he were to get sick on the trail, it would be complicated to find a way home.

Thru-hikers often run into gear problems along the way. After their first resupply, they reached an access point to the city of Breckenridge. Alden was in need of a sleeping bag liner to stay warmer at night, and his friend needed new shoes. They reluctantly took a bus into town with masks on to get what they needed. The only other time they entered town during their hike was after road-walking for three miles to Twin Lakes to buy some food at a general store.

After Twin Lakes, they turned right to take the higher route through the Collegiate Peaks Wilderness. A 16-mile section above treeline in this area was one of Alden’s favorite parts of the trail. This section was part of a nine-day stretch without resupply. Under normal conditions, they would never carry more than five days of food at a time, but scheduling resupplies forced them to do a longer hitch. Alden maxed out on the capacity of his pack and stuffed crackers into every nook and cranny. It was on this stretch that the harsh reality of not having town amenities for the rest of the trip began to set in. “The mental piece of it is crucial. There was a lot of mental fatigue due to the fact that we hadn’t taken any days off, and we hadn’t gotten real food for three weeks by the end of it. I definitely think that if we had gone into town every resupply, slept in a real bed, showered and eaten good food, I would’ve been in a better mindset,” Alden said.

26 days of hiking with no proper rest made an already challenging hike even harder. “The first 10-15 days, your appetite is kind of like it is at home, but it seemed like after you hit the 15-day mark, it ramps up exponentially,” Alden said. “The way thru-hiking is sustainable for months on end is [that backpackers] can go into town, replenish calories and get that morale boost.” After the Collegiate Peaks Wilderness, the trail drops down into what Alden dubbed as “cow country” before climbing back up towards the San Juan Mountains. During this section, the monotony of the scenery further contributed to the mental fatigue Alden was experiencing. On top of that, this year, there was little to no “trail magic,” which defines acts of kindness for hikers — such as a person driving out to a trailhead do a barbecue. The last section’s beautiful mountain wilderness helped ease Alden’s mental and physical fatigue. The descent into Durango after the San Juan Mountains marked the end of the trail.

Completing a thru-hike safely during a worldwide pandemic was a much more challenging experience than completing one during a normal year would have been. Alden came out of this experience with more mental fortitude, as well as a desire to take a break from thru-hiking for a while.  This fall he plans on completing his first trail running ultra-marathon and has his eye on the Sierra High Route for his next major backpacking trip. One thing for certain is that Alden deserves a huge congratulations on safely and successfully completing the Colorado Trail during the pandemic. 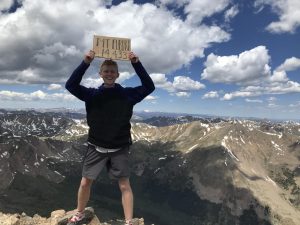