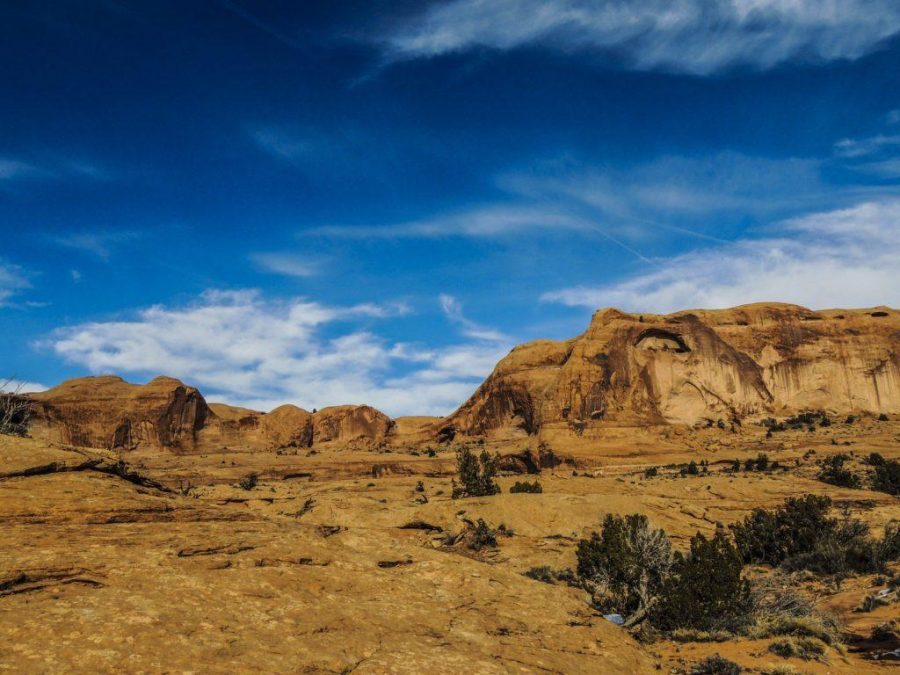 Another step in his fervent scramble to dissolve all measures undertaken to preserve the environment within the past three decades, President Donald Trump’s April 26 executive order prompted Interior Secretary Ryan Zinke to review — and potentially revoke — national monuments created since 1996. The results of Zinke’s review are recognized as a preliminary indicator as to how public lands are to be treated under the Trump administration. This heavy-handed exertion of government power, the president claimed in a speech made when he signed the Antiquities Act Executive Order, will “end another egregious abuse of federal power.”

The national monuments now under scrutiny were designated by Theodore Roosevelt’s 1906 Antiquities Act, permitting the acting president to take unilateral action in the protection of natural resources and historical points of intrigue on federal land under threat. While federal land protected by this law remains entirely accessible for public, recreational use, commercial exploitation (i.e., mining, lumber work, and oil-drilling) becomes strictly prohibited.

A firm advocate of the commodification of nature, Trump asserted in the same speech,“The Antiquities Act does not give the federal government unlimited power to lock up millions of acres of land and water, and it’s time that we ended this abusive practice.”

During the presidencies of Bill Clinton, George W. Bush and Barack Obama, a collective 26 monuments were ratified, and they will soon be under review. Choosing to retain a degree of ambiguity while approaching this sweeping review, Zinke suggested in an April 25 press briefing on that executive order that he will base his decision upon whether a respective designation had resulted in “loss of jobs, reduced wages, and reduced public access.” Zinke went on to assert that he is “not going to predispose what the outcome is going to be.”

This recent executive order has put Utah in the spotlight as Obama’s end-term designation of Bears Ears was evidently the initial inspiration for this move. The monument’s particularly extensive size has drawn immense criticism from Utah conservatives, for at over 2000 square miles, Bears Ears is currently over four-times the size of Canyonlands National Park, the largest in the state. Following the continual pandering of Utah’s Sen. Orrin Hatch and Gov. Gary Herbert, Trump directly asserted he was eager to reduce the boundaries of the 1.35-million-acre designation when signing his executive order. Recent events have indicated this wish is  likely to be brought to fruition.

After his definitive trip to the Bears Ears Monument, Zinke delivered a statement to Congress asserting the designation is “not the best use of the land.” He went on to recommend that Trump reduce the monument as to solely encompass the areas of historical and prehistorical intrigue, like residual cave dwellings, and archaeological sites. This recommendation remains purely sentiment until the president reaches his final decision in August following Zinke’s remaining 25 reviews, including that of Grand Staircase-Escalante.

For many environmentalists and tribal advocates of the designation, Zinke’s recommendation is perceived as a vulgar affront to the initial intentions of the monument, namely, respect for the five sovereign tribes holding sacred ties to the area, and conservation.

Adam Sarvana, a representative for Democrats on the House National Resources Committee, was reported in The New York Times as responding to Zinke’s recommendation for Bears Ears stating, “If you look at a map, that area is only about five percent of the monument area. … It seems like what they’re describing is a few stops on a boardwalk arcade, a few isolated areas, rather than a professionally conserved landscape the way national monuments are typically designated.”

While Zinke’s recommendation did concede to permit additional protections in certain locations within the existing monument in the form of national recreation and/or conservation areas, it is clear that what the secretary is proposing entails a mass reduction of Bears Ears as we currently know it.