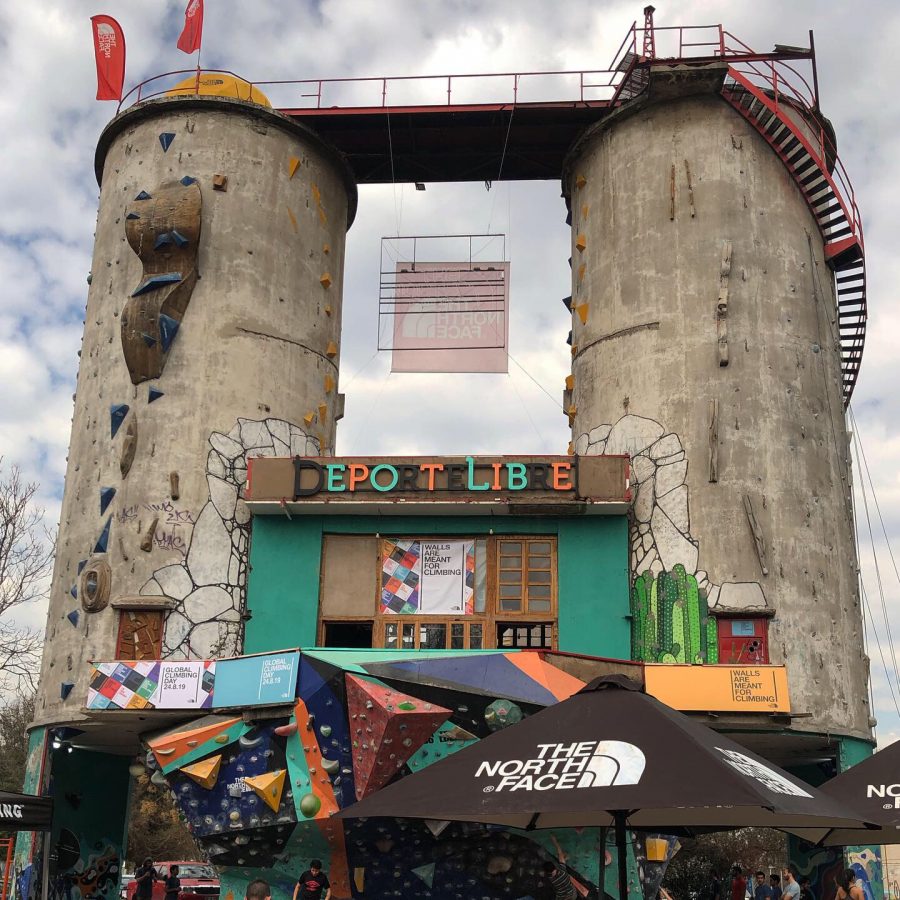 The world is waking up to the rush that is rock climbing. In the metropolis of Santiago, Chile, the situation is no different. Whether it’s pulling plastic or taking trips into the neighboring Andes mountains, more and more young people in Chile are getting hooked on climbing. Many of the universities in the heart of the city offer student-managed bouldering areas in courtyards or tucked into corners of campus. One of the most impressive opportunities for urban climbing lies in the outskirts of barrio Balcameda in Santiago Metropolitano.

Parque Los Reyes holds the typical offerings of Santiago’s parks — old men playing chess, excessive PDA, the occasional drunk, wholesome old couples taking a stroll, dads teaching toddlers to ride bikes, teenagers holding dance rehearsal, and, always, lots of people just park-chillin’. What sets it apart from other parks are the massive abandoned silos that tower above the trees. In 2010 an 8.8 earthquake rocked Chile and left many structures in the state of “not really broken, but probably shouldn’t be used.” Thus, Parque de Escalada Los Silos was born. Good-hearted folks at the Fundación Deporte Libre, a local non-profit that works to develop abandoned urban spaces into public sports facilities, took over the project and have transformed the silos into a free climbing gym. It hasn’t been an easy process — thieves, low budgets, and even arson have challenged the development of the gym. Despite it all, the result of the foundation’s efforts is truly amazing. For a few years, the Fundación Deporte Libre has offered free or cheap climbing courses and instilled safety, LNT principles, healthy habits, and stoke into Santiago youth.

Standing in the middle of a public park, the wall is open 24 hours, 365 days a year. Bolts are set allowing the most adventurous urban climbers to bring their own ropes and lead a few routes to the top. During the classes and events, climbers can be found scaling the insides of the silos as well. Impressive bouldering caves connect the two silos and bring life to an otherwise dismal looking structure. Boulder routes are not designated, but a plethora of holds allow climbers to invent their own or challenge friends in a Simon Dice (Simon Says) sort of fashion. Lead routes on the outside of the structure are comprised of a wild collection of holds varying in credibility and usefulness. Climbers can pull plastic, crimp concrete edges and pinch wooden planks that have been bolted to the walls. Natural cracks where the concrete is starting to crumble offer refuge when it appears that footholds have run out.

Good fortune carried me to Parque de Escalada Los Silos on what happened to be Global Climbing Day. North Face reps decorated the concrete towers with the mantra that walls are meant for climbing. Reggaeton and the promise of free stickers beckoned park-goers to come closer. They offered free equipment usage for the top rope routes and belay partners for young Chilenos and lost looking college-aged gringos alike. I found it easy to make friends with enough patience to tolerate my poor Spanish and that were surprisingly eager to practice their English. After crawling up my first route in weeks without any sort of warm-up, my new friends taught me the Chilean- Spanish word “empopeyo” — the pump. While language barriers can make it difficult to connect in a new place, within the outdoor community of Santiago I’ve found that some aspects of any climbing community are universal. We all agree there are few feelings more satisfying than leaving the gym with toasted muscles, new goals, and incomprehensible amounts of chalk on our pants. We all complain about the price of gear — in the defense of Chilean climbers their gear is at least 20% more expensive — and of course, keep tabs on which of our friends have cars that can get us climbing outside.