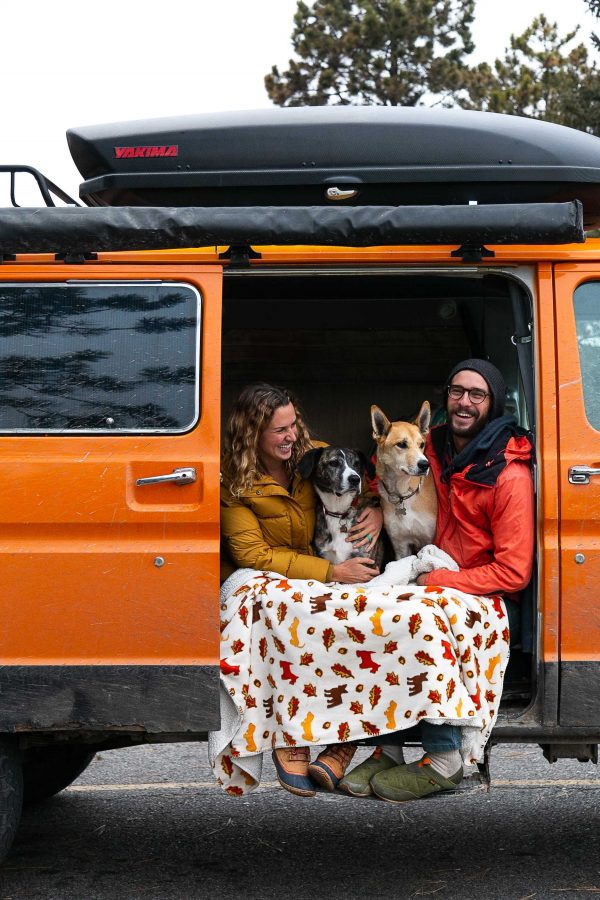 INTRO: When they first bought their big orange Ford van, Briana and Keith Madia hadn’t initially planned on actually living in it. The van, Bertha, was meant to be an adventure-mobile to haul their camping and climbing gear to and from Salt Lake City to the southern Utah desert regions. In no time, Bertha became home, but not without some stark realizations, like winter. Bertha isn’t a Sprinter, she’s just plain old Bertha—no AC, old heater, a whole lot of windows, and little insulation. From frozen gear to frozen faces, Bri and Keith have laughed and roughed their way through some of the coldest moments of their lives. Bri detailed some of their lessons learned while enduring Utah winters in the van, both as city slickers and desert dwellers. 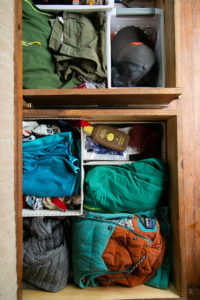 Moving into Bertha wasn’t an impulse decision. Instead, there was a prelude—a calling that began as a whisper and grew louder as weekend trips grew longer. Bri worked in Salt Lake as a technical writer while her husband, Keith, worked in Wilderness Therapy, the same place he’s been for about seven years now. Keith spends 24 hours in the field in remote southern Utah for three or four days at a time, sometimes even having to drop everything and go. Life in the city turned into planning in spurts, with a lot of unknowns. So, rather than continue to make weekly drives in her old jeep to the desert to meet Keith, they decluttered their life and set up shop in the van for good, with their dogs Bucket and Dagwood.

Before Bertha, Bri detailed their close call with a home purchase. “We went to the bank, sat down, and had a total meltdown and panic attack. We didn’t understand what they were saying, it was all kinds of numbers and we realized we were going to be paying it off for the next 40 years of our lives. So, we left the bank and pretty much started looking at classified ads that night for a van. We had no idea what we were looking for,” said Bri, but then there was Bertha in all her big orange glory, just listed, strutting her stuff.

They forked over “every last penny [they] had,” which came to about $8,000 at the time. A deal that good is basically unheard of nowadays, especially for a van like Bertha. Although she came with little-to-no storage and a bed platform, sans bed, she’s still a Ford who came lifted with 4-wheel drive and nice tires—a true belle of the ball. 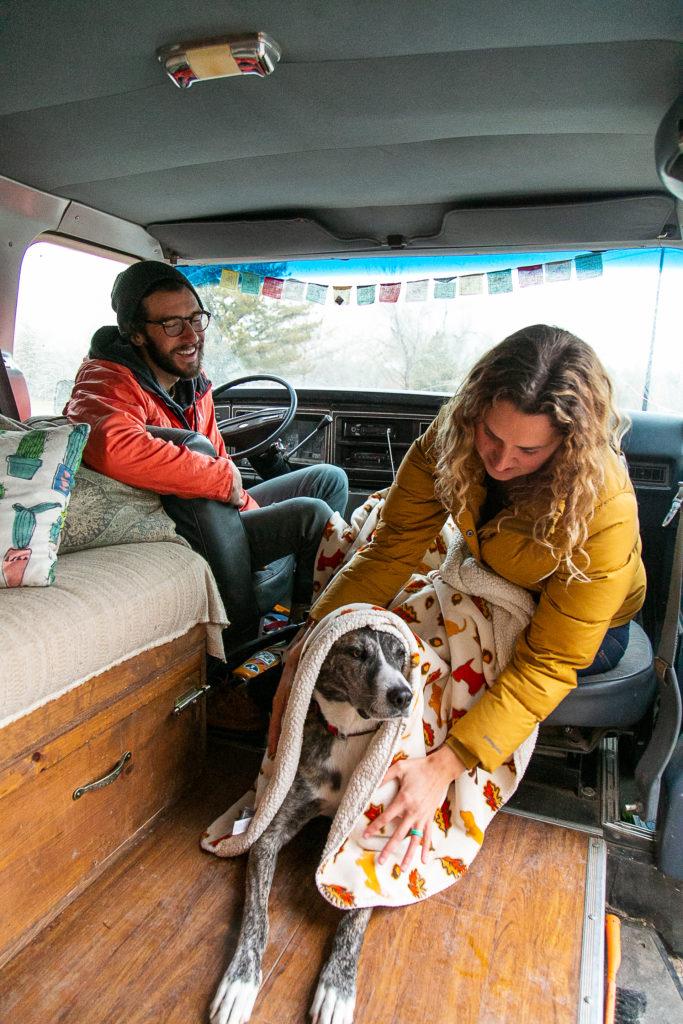 Since then, they’ve only made a handful of modifications to make the van livable, plus the tinkering required to keep her running. First, they flipped the bench seat sideways, which added more space. It was a simple perspective shift that allowed them to gaze down hundred-mile stretches of desert landscape, framed by Bertha’s sliding side door.

To be honest, there’s nothing fancy or chic about Bertha. She’s simple and practical, carrying with her only what’s necessary—much like Keith and Bri, who crave a life of simplicity and togetherness in open lands and small spaces, like slot canyons. There’s no kitchen or boujee pantry. “We didn’t plan on living in there at first so we didn’t mind cooking outside and treating it like camping,” said Bri. “And two years later, we are still camping,” she laughed.

Looking back, Bri described their first winter in the van in two words: “Absolutely brutal.” Move-in day happened one day in September, just six months after buying Bertha. They left energized about fall temperatures and climbing season, but it wasn’t until their trek back to Utah post-vacation, hitting a snowstorm, that they realized they had, quite frankly, forgotten that winter was coming.

“We had never turned the heat on,” said Bri. “It works.. But it was just dust,” she said, motioning her hands towards her face. “Then we realized the wind was coming through the door seals.” After arriving in snow-covered Salt Lake City, their level of unpreparedness set in. “Our solution was to put on 300 layers of clothing and shower at the rock climbing gym. I would just stand in the shower for like an hour and a half,” shrugged Bri.

While they’re pretty good at roughing it, they needed to do more. Bertha, however, is 50% windows, making the van nearly impossible to insulate. They opted to cover the windows with Reflectix, which Bri deemed as “the best shit ever.” Not only did it help the winterization process, but also dramatically dropped the van’s temperature in the summer too.

Despite insulation efforts, van life in the winter isn’t always toasty. Everything freezes. Your toothpaste, your face lotion. Even your clothes: zippers and buttons are ice cold. “Those kind of things were a huge wake up call,” said Bri, especially as she tried to write her book, and do her work remotely from the van. “You can’t type with gloves on,” she said. “I used a pair of liners but it just made my fingers slip off the keys and isn’t thick enough to be warm, so, that’s the crux; I’m still searching for the right pair.”

The first winter—“we thought we were so smart,” said Bri. “It dawned on us: electric blankets! How has no one thought of this?! So, we went and bought one without checking the wattage that it needs and it’s faaaar more than our solar panels can handle. They use so much power,” she said, so sadly they had to part ways and come up with an alternate solution.

Because you can’t keep the car heater running all day, Bri and Keith purchased a Little Buddy portable heater by Mr. Heater that runs on propane. “It has a sensor built in, so it shuts off. Which is great, because we don’t want to die.. but then it shuts off,” said Bri, shivering at the thought. In the morning, they reach out a single arm to turn it on, wait until the van warms up, “then you can get out and hold your pants in front of it before you put them on,” said Bri, as she excitedly mentioned their upgrade from the Little Buddy to a bigger, wider Buddy. 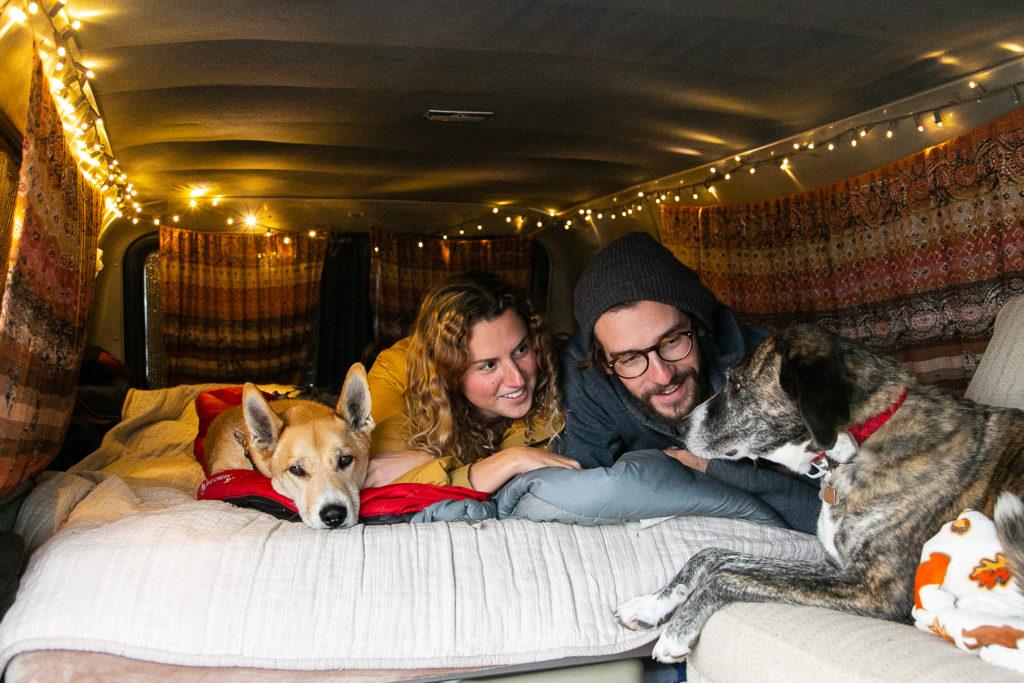 When it comes to sleeping, it’s one thing when you are individually bagged and buried separately from your significant other on a camping trip. But when you’re “sleeping next to your significant other every single night, it’s sort of sad if you can’t even simply touch them,” said Bri. So, it made sense from a practical husband-wife, winter-van-life perspective to add a double-person sleeping bag to the list of must-haves. It also doesn’t hurt they both sleep in Patagonia onesies and curl up with the dogs, who Bri deemed as “little generators.”

“Your head is the one part that always gets pretty cold, because everything else is so tucked under,” with the exception of persistently frozen feet, said Bri. She interrupted herself, saying, “Sometimes it sounds so ridiculous to say all of this out loud. Like why am I choosing to do this? I’d love to just drive to Mexico, but it’s not going to happen, so we sleep with hats on,” she laughed. She admits to being a bit stubborn, especially during that first winter. She denied offers to going inside and crashing on couches. “It felt like I was cheating and couldn’t do that because I said I was going to live in this van, so I had to do exactly what I said I was going to do.”

Now, Keith and Bri have a permanent (flat) parking spot in the city when/if they’re here. But in the past, choosing not to crash with friends in town meant having “to secretly hide in the back with a headlamp and a book,” said Bri. The sun sets early in the winter, so it’s nearly impossible to stealth camp unless you go to bed at the strike of 5 pm. “You can’t just sit in the street with your lights on,” said Bri. They’re not reckless; they’re still courteous, law-abiding citizens. Sometimes, that just means hitting the hay a little early.

Staying bundled in the van from early in the evening through the night means a lot of condensation that freezes on the inside. Coping with that became quite a routine, especially when they used to be in Salt Lake. They frequently parked on a particular street because it was flat, quiet, and had a burnt out streetlight. Bri said she’d wait “until it was warm enough to get dressed then climb in the driver’s seat and use an old credit card to scrape the inside of the windshield, leaving shaved ice everywhere.” Although not ideal, I’m sure the ice made a tasty treat for Dagwood and queen Bucket. 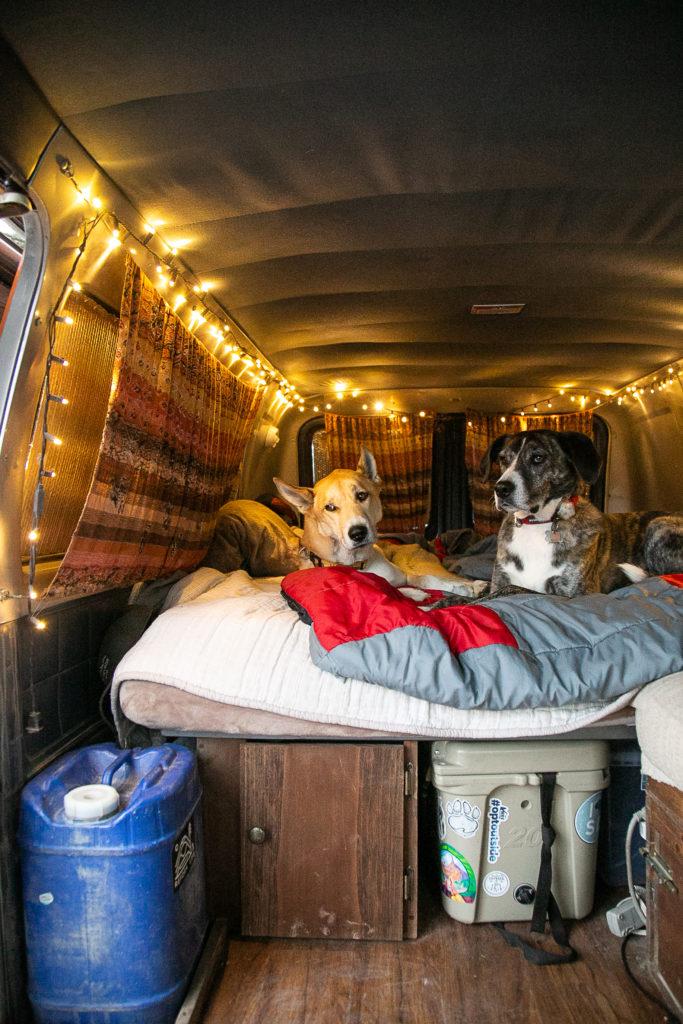 While they have a DIY outside shower in the summer, they simply can’t afford that luxury in the winter. Even showers at the climbing gym, friends’ houses, or at Keith’s work means walking out with wet hair, which inevitably turns to icicles. So, when in the desert, it’s not uncommon that Bri will opt to sponge bath with hot water and her REI microfiber towelettes, of course with Little (big) Buddy running—the ultimate desert spa experience.

The anti-spa experience, though? Going to the bathroom. The ground is too cold and frozen to dig. Even peeing sucks. In the winter, the ground goes from absorbent summer sand to a frozen and ricocheting surface. “So, we try to hang out in places where we know there will be a pit toilet, like ones that BLM rangers and ranchers use,” said Bri… or pee in a bottle inside the car.

On a day to day basis, sometimes Bri will stay in bed, write, or binge-watch Netflix, typically when Keith is out in the field. She has Seasonal Affective Disorder, i.e. seasonal depression. “I think living in the van makes it work, because you can’t hide from the winter,” said Bri. She takes vitamin D and “models [her] days around the sun.” She sets up her camp chair in a sunny spot, sits inside of a sleeping bag, “with little T-rex arms,” to type, and moves with the sun throughout the day.

When it’s her and Keith, they’ll make breakfast, still “a freezing endeavor,” because even the desert can get a couple inches of snow. But, Keith likes to be on the move, so a lot of days they’ll move to stay warm, like biking or hiking with the dogs, with a side of Keith on the guitar. “But, if you break any type of sweat, you’ll get very cold,” said Bri. Basically, winter van living is an art of staying dry and warm. It seems like a lot of hassle, “but the winter actually forces us to slow down,” said Bri, something which stuck with her after that first winter in the van. “I actually had to go with the actual flow of time, and light, and what my body feels like—just like all animals who live through real winters.”

When the curtain closes on summer, and the quivering winter winds roll in, we often stand in awe of all the creatures who adapt and endure the season. While preferring the summer, the Madias have grown fond of the simplicity a winter van life provides: vacant roads and desert stretches filled with wandering bighorn sheep and coyotes howling midday. For Bri and Keith, the choice to live in a van wasn’t born out of trends or seeking fame. “I like having this small life, where everything is within arms reach, in this rolling box,” said Bri—a life that allows them to be in the desert as often as possible, together, down every dirt road, regardless of time or season. “It’s probably what we’ll do forever,” said Bri.