Wheels in Wilderness: An Examination of The Wilderness Act 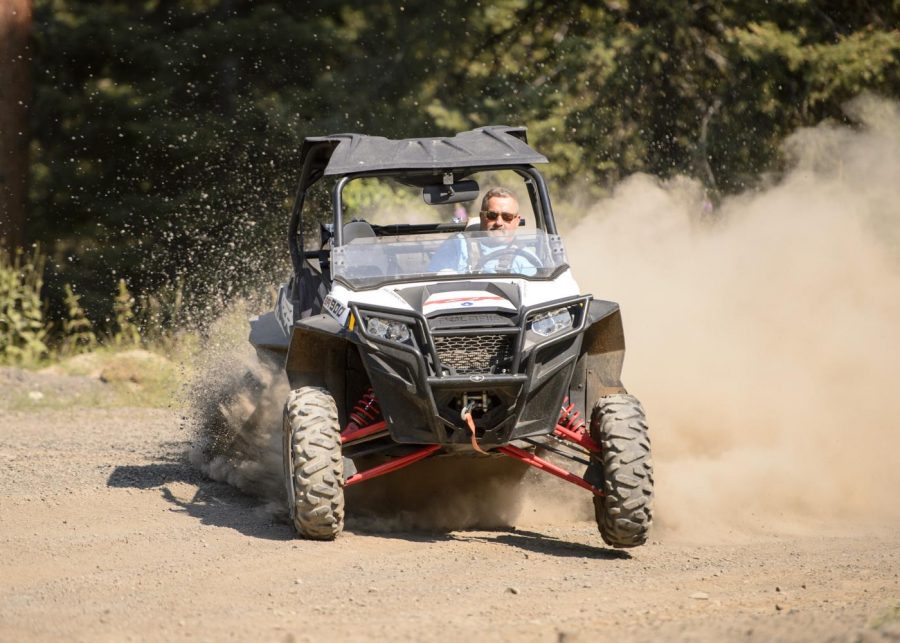 Many people choose to use ATVs to access backcountry areas and pristine landscapes with speed and ease. They allow anybody the ability to travel into rugged landscapes that cars can’t access.  Motor recreationalists argue that ATVs provide economic benefits to communities and provide outdoor recreation opportunities to the elderly and the disabled. They also argue that with increased technology, noise and pollution caused by the vehicles will be minimized. However, ATVs do damage. ATV use can lead to habitat destruction, water ecosystem corruption, erosion, dust, noise, and disrupted experiences for recreationalists seeking solitude and quiet. Whether or not ATV access should be allowed in pristine Wilderness landscapes and federally managed public lands is an ongoing debate between preservationists and motor recreationalists.

ATVs, snowmobiles, and other motorized vehicles are not allowed in Wilderness areas. Designated Wilderness (with a capital W) lands are federally protected for a number of reasons. This is the highest level of government protection that can be placed on an area. These are lands protected by the Wilderness Act of 1964 and can only be accessed by horseback, backcountry skiing, kayaking, or hiking.  Any transportation with wheels is not allowed. The reason for the ban is because ATVs can have a profoundly negative effect on the natural landscape.

A study by the U.S. Forest Service looked at the effects of ATVs on undeveloped land. They found that “vegetation was reduced by a minimum of 40 percent and more often was completely eliminated as a result of ATV traffic at the test sites. Soils were compacted (except sands and gravels), displaced, or loosened, making it available for transport (erosion) by water. Of the soils tested, the hydraulic conductivity (soil’s ability to absorb rainfall) was reduced by more than one-half, while the soil erosion increased by more than one-half as a result of ATV traffic.”

ATVs are not light and their weight compacts the soil. This squeezes the soil’s air pockets out and makes it hard for water to be absorbed by the ground. Water that isn’t absorbed runs over the land as runoff and surface soils are washed downhill into water basins.  The sediment-filled runoff can then have negative effects on the aquatic wildlife and ecosystems. Sediment suspended in water clouds the water and can block the sun from photosynthesizing aquatic plants. Sediment also settles into small rock crevasses on the bottom, clogging the homes of small aquatic bugs and animals. Many people believe that using smaller, more lightweight vehicles will reduce the impact. This has been proven incorrect. Sport-model, lighter weight ATVs have been found to cause just as much of a disturbance as utility-model vehicles. Whether it is a two-wheel dirt bike or a large ATV, the destruction is inevitable.

Olivia Juarez from the Southern Utah Wilderness Alliance brings up another interesting point as to why motorized vehicles are prohibited in Wilderness areas: noise pollution. For example, “ATV routes end 1/4 mile back from the rim of Labyrinth Canyon [in Emery County, Utah] to make sure that the natural quietude of the canyon is protected from vehicle noise. This is hugely important for the wildlife species who inhabit the river corridor, and folks who float along the river.”  This is a disturbance that many people don’t think about.  A report published by the Wildlife Conservation Society said that loud noise can “affect predator-prey relationships by masking the sounds that generally have an important role in those interactions. High levels of background noise can have a number of indirect effects as well. Noise can cause an increase in animals’ heart rates, and affect behavior patterns such as nesting and reproduction or feeding and foraging. These impacts may or may not be devastating to an animal depending on the season, its energy budget, and the extent of the disturbance.”

Preservationists also argue that not only are ATVs bad for the ecosystem, but they also have negative effects on humans’ respiratory health.  According to the U.S. Forest Service, ATVs cause significant amounts of soil migration and areal displacement. They found that in areas with high ATV traffic, air concentrations “would be expected to be well into the unhealthful range where the forested edges of the trails inhibit air circulation.”

On the other hand, there are many people who support and advocate for the existence of ATV’s. For example, the Utah Public Lands Alliance, a local non-profit, works to preserve the land while allowing all recreationalists the opportunity to enjoy the land. They work with federal land management agencies, local legislators, and stakeholders to increase public awareness of the ATV debate and fight against bans. They hold outreach projects to shed light on their side of the argument and to reach a compromise with legislators. Some of their projects include working with the BLM to install clear permanent trail signs so ATV-ers know what trails they can use, construct new trails to access the West Rim trail system, and install composting toilets for Sand Mountain, a popular spot for the motor sports enthusiasts.

In San Juan county, ATV use has been an ongoing debate for years. Locals argue that by restricting motorized access to certain areas, they are catering to specific groups, such as proponents and preservationists. They believe that the restriction closes land access at the expense of the public and especially attacks those that have trouble walking. A man named Phil Lyman organized a protest back in 2014 surrounding the issue of ATV restrictions in San Juan county. The BLM was failing to process the county’s applications for ATV rights-of-way in the area. People believed the closure was arbitrary and unnecessary. Lyman and over 200 supporters illegally rode their vehicles through a restricted area of land to prove a point. Following the protest, the BLM feared that the vehicles may have damaged ancient Pueblo artifacts and dwellings. Phil Lyman was convicted of trespassing and spent 10 days in jail. His protest made the area a focal point over the debate of motorized recreation and federal management of public lands.

Three years later, in 2017, U.S. Secretary of the Interior Ryan Zinke and the BLM lifted the ATV ban. Zinke claimed that “the new trail access will help provide greater access to public lands for individuals who may be disabled.”  Along with the grant of access, new parking lots, staging areas, kiosks, benches, and other public infrastructure was developed in the area to accommodate the motor recreationalists. Phil Lyman stated that he thinks Zinke’s decision to allow access bodes well for locals supporting President Trump’s efforts to rescind the dedication of Bears Ears National Monument.

Another interesting argument concerning vehicles in Wilderness areas is that of mountain bikes.  They too, are banned from the land. This topic is met with a lot of controversy because mountain bikers feel that they do less damage than hikers and far less than equestrians, who are both allowed. In 2006 the National Park Service released a study about what mode of travel affects trails the most.  The results showed that “the proportion of trails with severe erosion… is 24% for ATV trails, 9% for horse trails, 1.4% for hiking trails, and .6% for bike trails.” Bikers believe that the authors of the Wilderness Act never specifically intended to ban bikes. A staff attorney in California did a 2004 review of the legislation and declared that “Congress did not intend for the Act to prohibit human-powered transport. Accordingly, the regulations of the Forest Service… prohibiting mountain bike use in Wilderness require reevaluation.” It states very broadly in the act that there should be no use of “mechanical transport.” This could be interpreted to mean anything from ski bindings to snow shoes to SUVs. Bikes weren’t officially banned from Wilderness areas until 1984.

Cyclists around the country are banding together to protect their trails and fight against the designation of more wilderness. This is unfortunate, considering that most avid mountain bikers have an appreciation for rich and unobstructed landscapes. If bikes were allowed in Wilderness land, there would be less opposition to the landscape protection. There are compromises being made, however. In 2009, the International Mountain Biking Association and Oregon Wild worked together on a bill to designate 34,000 acres of National Recreation Area within a new 127,000-acre Wilderness area. They worked with legislatures to keep part of the land open for biking. These victories are hollow, though, because the land can now be used for other extraction and recreational purposes, leaving it vulnerable to degradation.

Bikes are destructive, but by no means are as bad as a motorized vehicle. However, people believe that bikers are aesthetically disruptive. There is a tension between hikers that want peace, quiet, and solitude when entering the backcountry and the bikers that want adventure and challenge. Knowing that a mountain biker might be coming around the next bend also adds a level of danger to hiking on a trail. Studies have shown that faster moving trail users often disrupt wildlife less than hikers because they are out of the area faster. Bikers are also predictable, mostly staying on the trails and often exploring off trail less than hikers do. However, they can cover much more distance in a much shorter time and disrupt a larger portion of wildlife.

The solution to what should be allowed in Wilderness areas is unknown, and either way people will be unhappy. Focusing on what is best for the land is what the Wilderness Act was intended for.  The designations were not created to provide land for humans to enjoy without vehicles, that’s just a perk. The Wilderness designation was made to protect the integrity and originality of the land itself. According to the act, “[a] wilderness, in contrast with those areas where man and his works dominate the landscape, is hereby recognized as an area where the earth and its community of life are untrammeled by man, where man himself is a visitor who does not remain.” The debate over bikes and ATVs in Wilderness areas is ultimately an anthropogenic argument that splits from the intentions of the protection. It focuses on the human’s recreational experience rather than on the actual preservation of the land. That being said, people appreciate the land for its recreational value and benefit to their lives. It is important to remember the intrinsic value of the land when recreating. No matter what it is that you do outside or which side of the argument you support, recreate with care and caution in order to minimize your impact.