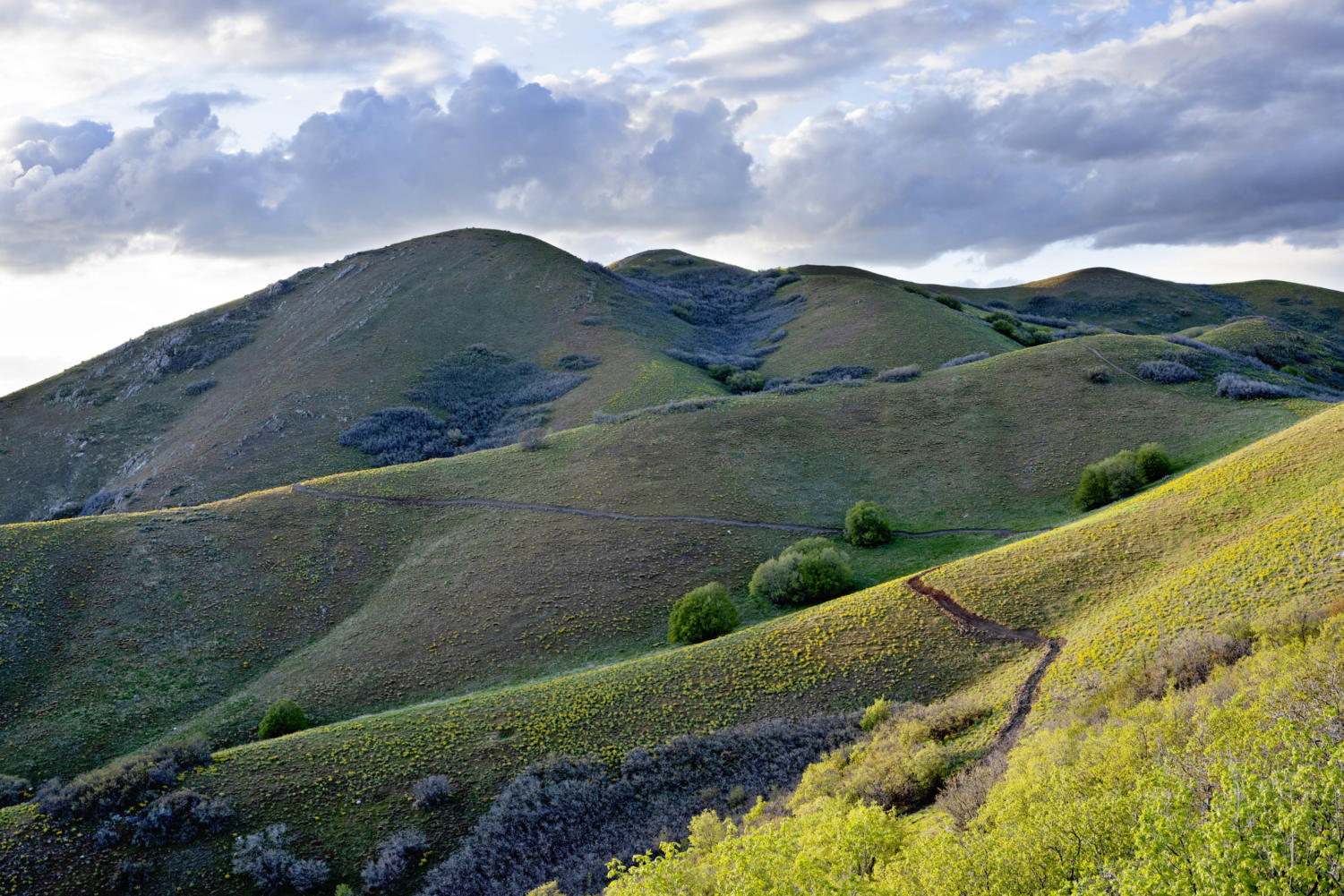 Trails for Who? Accessibility and Sustainability in Salt Lake’s Foothills

When I first moved to Salt Lake City, I didn’t have a car. As a freshman at the U, I was perpetually thinking about how I was going to get into the mountains. I stressed over meeting people with cars who would be down for weekend hikes and could drive me to the mountains to ski. Realizing that my dorm backed up to the foothills helped relieve this pressure for me. Miles of trail high above the city lay just outside my door and provided refuge when school got tough. Every spring for the last 4 years, I’ve waited in anticipation for the hills to burst into a sea of bright green grass and fields of arrowleaf balsamroot (the yellow one). The foothills beckon hikers and bikers back to them after a long winter before the rest of the Wasatch is ready to. For a few weeks of spring, they throw a welcome home party like no other, decorated with flowers accented by longer days. To me, it’s heaven.

The foothills are invaluable to Salt Lake City. Their close proximity to both the University and the downtown area is one of the greatest draws to the foothills. The trails are a haven for Salt Lake dog owners who have fairly limited hiking options close to the city due to watershed regulations. They offer refuge for city residents seeking to get above Salt Lake City’s infamously bad air. These trails are some of the only ones in the region that can be accessed by public transportation. During the pandemic, trail use exploded as people sought safe ways to get outside.

The trail systems in the foothills are managed by the Salt Lake City Public Lands Department. In the past few years, plans have been drawn and partially implemented to add more trails and redesign parts of others. Improvements have been long called for; the foothills are plagued by social trails and erosion. The “Foothills Trail System Plan” is encompassed by 5 major projects that began during the summer of 2020. Thus far, the city has added trails from Popperton Park, the Upper Avenues, and out of City Creek Canyon. After City Creek, however, construction came to a quick halt.

Local news outlets have reported that residents have many criticisms of the new trails once they are off the paper and onto the landscape. Complaints range from “the trails are too steep” to “the trails aren’t steep enough.” Residents have observed that certain areas are already eroding. Residents also appear to have strong feelings on the poor aesthetics of the trails, particularly out of City Creek where switchbacks scar the landscape. Some mountain bikers have expressed being disappointed by the new trails, citing them as being too wide and not that much fun. In short, trail users aren’t very happy with the city’s vision. The balance between accessibility and sustainability in the foothills has yet to be struck. As a result, construction was stopped in May of 2021 and will remain so until at least May 2022. At the root of many of the complaints, there seems to be pushback against the increased usage of the trails and fears that adding more trails will amplify this perceived issue. The foothills most attractive feature is their easy accessibility, but for many, this seems to be part of the problem.

During the pandemic, the foothill trail systems saw use like never before. The popularity of mountain biking has soared nationwide, and in the foothills, it shows; over the summer, popular trails like Bobsled had lines of bikers waiting to descend. Many trail users expressed that the foothills don’t feel like a safe place to bring their dogs or children because of the hordes of cyclists ripping through them. Bike-only trails help accommodate the growing interest in biking and keep hikers safe, but only a few have been implemented at this phase of the project, and not without backlash from people who feel the new trails prioritize bikers. Additionally, with the sudden increase in trail users comes an increase in vehicles getting them there. Parking has become a serious issue at trailheads and in the Avenues. As an Avenues resident myself, and a frequent visitor to the foothills trails, I worry that many of the complaints I hear come from a place of NIMBY-ism (Not In My Backyard) and have implications of gatekeeping.

As stated, the trails in the foothills are managed by the city. This means all city residents have the right to access and use these natural spaces. The foothills are everybody’s backyard, not just Greater Avenues residents. Thus, crowding is a product of population growth and poor urban planning. There are public land management practices that can allow the foothills to be heavily utilized and still protected. Better signage, for instance, would assist users in navigation and offer reminders of trail etiquette. If hikers know where they are going and know there is a trail to get them there, what is the motivation to cut trails? Additionally, a comprehensive analysis of where areas might be most prone to erosion and the ecological impacts must be included in any planning.

The City was responsive when potential issues surrounding cultural resources for indigenous peoples were voiced. Public Lands Director, Lewis Kogan, acknowledged the need to consult a wider audience on their visions and hopes for the foothills’ trails. The City is willing “to hear and adapt” and is taking the time to do so before continuing construction. Some residents remain frustrated with what has already been done, but the moratorium allows for more public input and a more thorough analysis of environmental and societal impacts.

Redesigning a trail after it has already been dug into a hillside could be likened to trying to put toothpaste back in the tube. Stopping construction of new trails in the foothills is like leaving the toothpaste uncapped, but with the input of stakeholders, a mess can be prevented.